Dammit, that's true. Compared to Tencent, Steam is an innocent lamb, so I really dread the idea of Epic turning into Tencent's key to the western PC market.

If Tencent's going all in for this, though, they could put bot League of Legends and Fortnite in their service. That's huge, bigger than anything Steam has by far.

Oh God… not another one -.-
I already got:
Steam
Battle.net
Origin
Uplay
Social Club
Windows Store
all on my PC. -.-
Thanks to (whoever listens) that Windows Games Live died..

Physical is not going back to what it was.

Digital gaming is changing the landscape, even for consoles and portables.

Physical games on PC are dead will never comeback. Plus devs get a bigger share of a game sold digitally than physically.

Eh. I don't know about that. I don't see anything that could threaten the industry in the large scale.

I know, I know. It just sucks.

Hmm, I had already forgotten that. Now I know what to think about this: I don't like this. Rainbow Six Siege almost got screwed, probably mostly because of China, and now we're going to have a distribution platform with a huge Chinese company behind it. I'm not expecting many real problems but if it has an effect, it will almost certainly be a bad one.

Another Storefront? Well maybe this might give Valve a kick up the ass and make Half Life 3, Portal 3 and Left 4 Dead 3.. Because right now with Windows Store growing and Battle.net gaining Activisions games, Steam is starting to look a little weak on the games front. Competitive prices are nice however that's not going to hold up long for Valve as others will start matching or offering better deals.

Fingers Cross this is a push for Steam to start becoming more attractive again. As for Epics Storefront, I hold no interests in it as of yet.

Maybe it might give MS a right heavy kick up the arse to completely sort out their storefront and get more PC only games going.

Steam has a bigger library going than the MS store, so let's not kid ourselves into giving MS more pats across the back, for what little they do for PC gaming. Steam by far still has more features and built in modding for PC games, MS store does not.

Also Activision only has two games on B.net, which are both online and have a defined limited lifespan, L4D 1-2/Tf2/HL/Portal do not.

Also CoD went for more than full price on B.net, so no "competitive" pricing there at all, same for the MS store and Uplay/Origin. The only one actually being decently competitive is GoG.

Also"matching"?, yeah, when's that going to actually happen for once?.

People give Steam shit for not pulling a Ubisoft and spamming franchises yearly (which is actually quite bad and shows a willingness to milk something to death, but some forum users here don't give a fuck about artistic vision or integrity), yet here is Epic deciding to drop a PC IP because Tencent likely told them to, all because it's not a "billion dollar franchise".

All this tells me, is that it's all about money and nothing else. Although Valve are making some VR games and a card game, both of which I have no interest in, at least they are still making something, while Epic just drop their PC ip's like a rock, because a greedy af Chinese company told them to (just like they told them to make FN a BR game and to focus less on the original design).

Not seeing the bigger picture again are you. Steam only offers 3rd party games with an exception of afew. Something there competitors will be offering as well.

Sure Steam has more games, its also filled with some of the worst shovelware and offers a bunch of VR games that are useless to the majority. Steams quality control is up the creek and that needs to be addressed.

Windows store isnt perfect but it works well enough. While next gen Win10 will be offering games like Halo Infinite, Gears and 14 studios making games with W10/Live in mind, Steam will be offering.. umm the same 3rd party games like every other store front.

PSNow and Live are only getting bigger and this is something i am suprised you don't see.

There is no "bigger picture" to begin with. There are only a few storefronts doing one or two things, all while largely ignoring what Steam has been offering for years (even you ignore this directly on purpose. You try to excuse it and you will do so when I point this out to you in some shape or form) in terms of features and services.

Steam offers thousands of games, thousands more than any other storefront hopes to even offer. If you want to cite one storefront having garbage, then you have to include them all, and when you have to then resort to "well this store has the most", then you're honestly running out of options to admit that the other storefronts do a poorer job. Look at MS's storefront and their cluttered mess of mobile and F2P games, with the few AAA games being offered within their storefront. They have a very, very tiny 1st party offering on their storefront, smaller than Steam itself. Even then I can still play L4D 1-2, TF2 and the portal games just fine on my system. The gears ultimate collection?, not a chance, because it currently still runs like arse on my system as well as other user's systems as well (and please don't pull that shitty little "well it works on my system, so I'm right above everyone else" schlock), and there is still no way to sort those issues out, as well as there being any help from MS to fix it. Meanwhile, TF2 still receives updates, as well as CSGO, years and years later. Same goes for DOTA 2.

Also, one man's trash is another man's treasure, and according to Windows store, PC gamers apparently fucking love mobile trash, just look at this utter tripe: 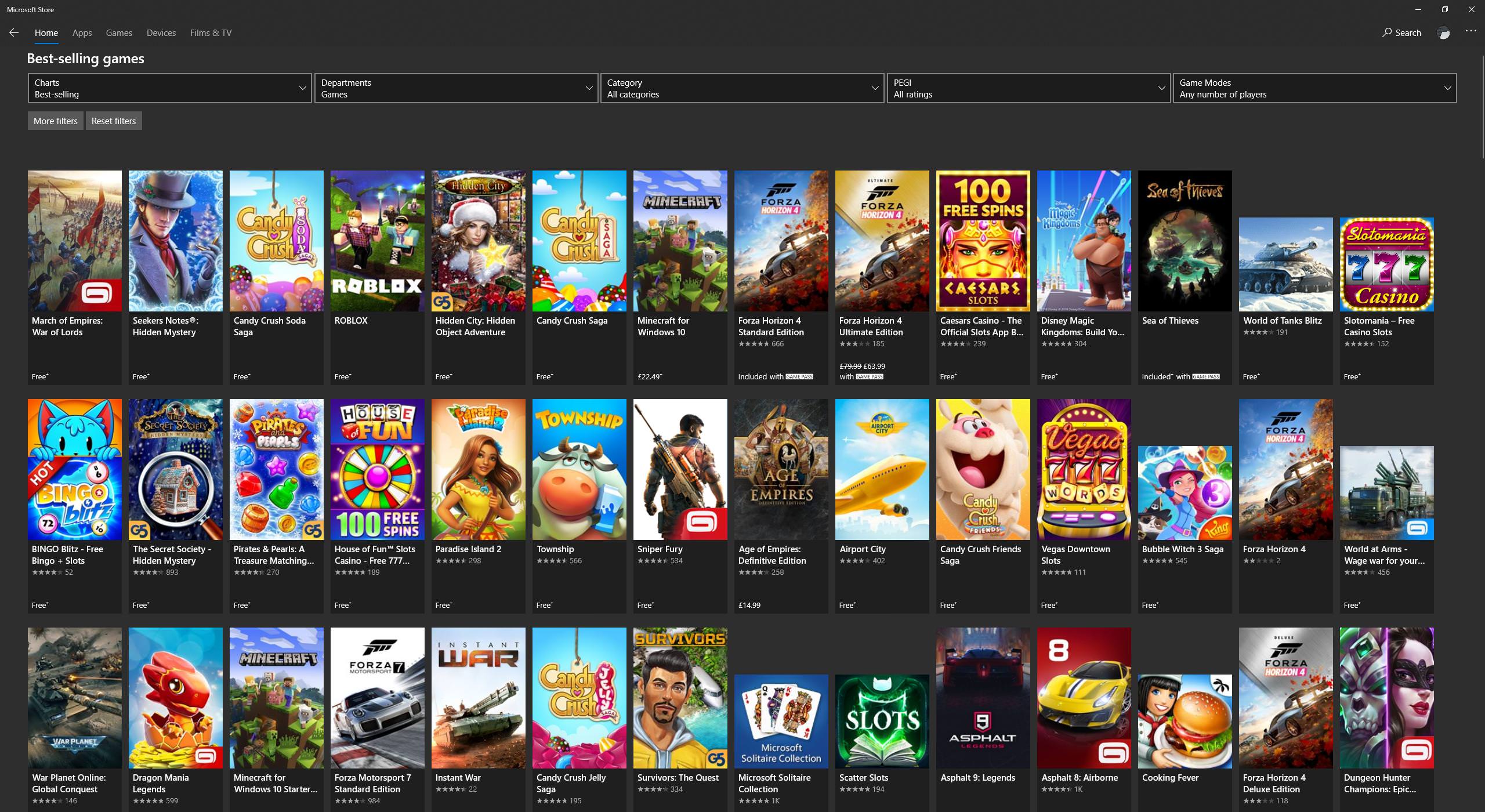 Now compare it to Steam's, which also includes offers and what's trending among friends, as well as offering categories up front on the same page, as well as being sifted automatically thanks to the discovery queue that I've been able to complete at any time: 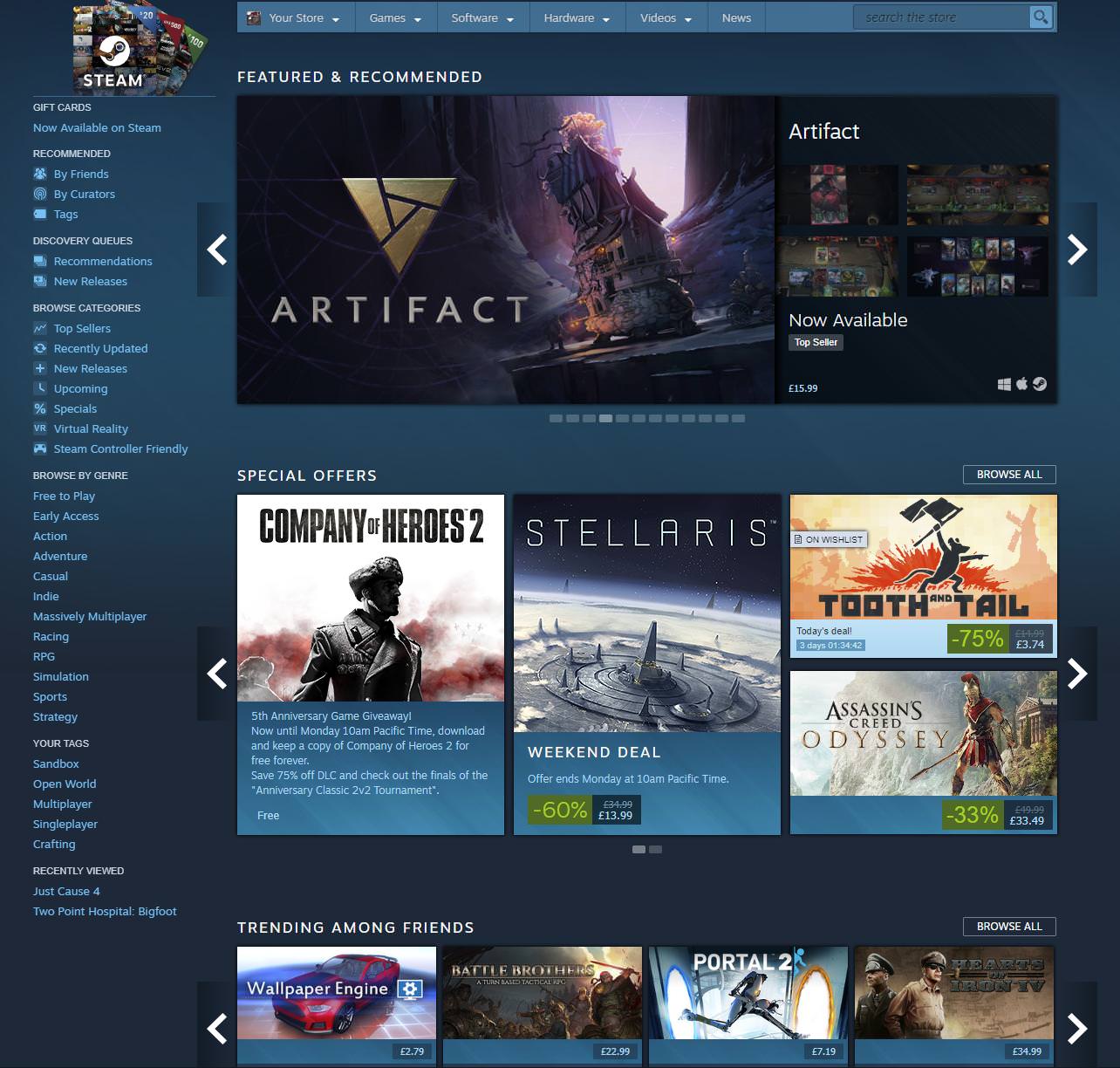 Windows store is far, far from perfect, and even MS know this, and they've known this for more than 4 years and yet they keep nattering the same promise year after year and yet they do nothing about it, and you have gall to think that Steam needs a kick up the arse. At least they are leaking details and info about their storefront overhaul via Twitter, fucking MS hasn't said nor shown anything for theirs. All they keep doing is spewing the same "we know it's bad, but we promise we'll work on it", but they never do. That's not my opinion either, that's a god damn fact, and I'm tired of you always mirror retorting or blocking the shit that I point out each and every time.

This was two years ago: https://www.pcgamer.com/microsoft-promises-to-improve-the-windows-store/

And then there's this: https://www.reddit.com/r/Games/comments/9w3ey3/phil_spencer_promises_to_fix_microsoft_store_for/

This has been well over a year ago and all we've had is AoE 1 remaster: https://www.pcgamesn.com/microsoft-promises-more-games-in-2017

MS made promises to PC gamers last gen, and they fell through with them and just kept rolling with that horrible GFWL DRM, just like they wish to roll with UWP, so PC gamers cannot mod/fix those games. That's why I cannot modify and fix the broken mess that is Gears Ultimate. My PC runs all other games fine and dandy, but not a busted console port that's forcing you to run with the horrid DX 12 API, with zero option for DX 11.

Steam will be fofering their own games, the games they have been working on over the years, years which MS has been working "forever" on, umn, like maybe, I dunno CRACKDOWN?.

MS needs a far bigger kick up the arse when it comes to PC gaming, because others like Steam/GoG have been offering what MS has not (by definition of fact, not subjectivity).

Also, fuck paying a sub fee for "free games", I'd rather pay up front per game to own them. Fuck right off with that toxic netflix style bullshit.

I'm surprised you still defend a mega corp to the death, and claim you're "for everyone". You sure don't show it.