It truly did.  And if my brother or I fought on the clock (which we did a lot) we would be docked hours.  Pretty brutal, but I didn't know any different.  I just knew every hour bought me a pack of garbage pail kids cards or a game of space invaders (the only arcade cabinet we had in town), and it seemed worth it.  And I do believe saving up for the NES (with ROB) was worth it.  I didn't have many games and had to borrow most from my friends, but going from having to wait all summer for the arcade to come to town with the fair vs playing super mario in my own house was unbelievable.

Admittedly, what I said was largely an exaggeration. However, I'd argue that analogy is an even bigger exaggeration, but fair enough it calls out my point and I concede on that.

That senetence doesn't work unless you make Skeletor to Skeletor's henchmen. Skeletor in never himself bumbling.

Mumm ra on the other hand... had this happen against Snarf

All right, well, hang on. You saying that if Snarf-Ra had shown up in Eternia, he couldn't have dealt with Skeletor, too? Snarf-Ra had stumbled into some awesome power (possibly diminishing Mumm-Ra's in the process; who knows how thin the Ancient Spirits of Evil can be spread?) and had the advantage of surprise. Could happen to any villain.

I've got to admit, though, that Skeletor had a nice ride. 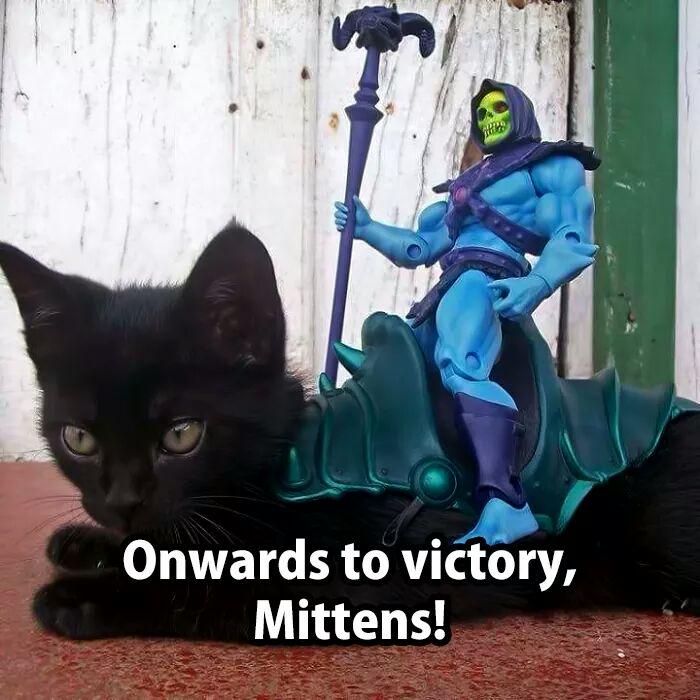 That's exactly what I'm saying, because Mumm Ra is a joke. Snarf didn't *stumble* into some awesome power nor did he have the element of surprise.

He was literally chained next to the ASOE with a chain that was, quite foreseeably, easily broken. Also turning into Snarf Ra didn't drain Mumm Ra as Mumm Ra would have known his power was siphoned. Its not as if Mumm Ra's hideout was the next town over it was some significant distance. Even if it was close, Mumm Ra would have noticed the power slip while fighting Lion-O, who he had the element of surprise over in the first place. Who ties up their enemy next to their literal well of power with so much time and planning on your side, and leaves them there unattended? Who? I can't get over that.

Aside from that, its not even the only embarrassing loss he had (though I'd argue its the most embarrassing).

This dude bodied him with relative ease, Mumm Ra points to Lion-O as a better challenge to get this dude off his back, and the literal man-child Lion-O beats this guy so bad he leaves the planet and never returns to the series.

I'm not saying that Skeletor would sandbag Snarf Ra, but he would totally sandbag Snarf Ra. Skeletor unlike Mumm Ra knows how to use his power and knows how to use the powers of his enemies against them. He-Man is significantly more powerful than anyone in Thundercats and there are times Skeletor is too much trouble in a one on one situation. Skeletor actually spends times planning and has the skill to adapt to most situations. Mumm Ra, however only has a vast power that he continuously uses poorly, which is why a Snarf Ra created for the first time without his vast knowledge was able to beat him.

On reflection, you make some good points, and they have caused me to reconsider this entire situation...

Snarf was literally chained next to the ASOE with a chain that was, quite foreseeably, easily broken, just as you say... Who ties up their enemy next to their literal well of power and leaves them there unattended...?

In fact, have you considered that Mumm-Ra knew exactly what he was doing -- and did this all intentionally? Think about it. Snarf had to call upon what -- the Ancient Spirits of Evil -- to effect his grand rescue. Precisely like Mumm-Ra knew he would.

Using that kind of dark power, like reading the Necronomicon or summoning the Cenobites, does not come without consequence. I submit that what appears to you to be a tactical blunder was in actuality a strategic master stroke. Mumm-Ra is playing the long game, slowly corrupting the ThunderCats... from within.

There's no shame in taking this L. That was the Demolisher, dude. The Greatest Warrior in the Galaxy.

If Lion-O was able to take Demolisher down in the end, it's because the battle with Mumm-Ra had already pushed him to the limit.

I'm flabbergasted, but impressed by your optimism of the character.

No, I did not think that was a possibility because its not. Let me preface the fact that Mumm-Ra never is that smart by stating this:

After sending Mumm-Ra flying, Snarf immediately became disinterested in his newfound power and asked Lion-O to nullify it. He used the sword of omens to do so, which is well within the feats of the sword. This point is proven by the fact that the episodes following proved to have no issue for the character whatsoever. This proves that Mumm Ra did not have the foresight for such a plan and the ASOE were more than likely just tired of him.

Speaking of the ASOE, they were really tired of Mumm-Ra, who has proven time and again that he fails to follow through with any of his plans. Its so bad that they literally have to given him instructions and hold his hand step by step on how to do it.

As for Demolisher, no. He proceeded to lose to (and I emphasize this) a literal child aged into a man's body after basically defeating Mumm-Ra with little effort. This dude barely had any effort expended and by the time he came to face Lion-O he was well rested. I question if L-Ra even makes for a good minion.

Wow...this went deep real quick. Wish I could watch videos on computer at work. I'll have to get back to this thread later. I've never even seen this episode where Snarf turns into Snarf-Ra. I've got some homeweork to do.

I stan for no cartoon villain; I'm merely trying to bring some much needed objectivity to the discussion.

Mumm-Ra not smart? You don't get to be ever-living by accident, my friend. In fact, Wikipedia has this to say about Mumm-Ra: "Mumm-Ra is also praised for being much more competent than other famous cartoon villains from the 1980s; such as Skeletor of Masters of the Universe fame." That's Wikipedia, bruh. It must be true.

And yes, of course, Snarf rejected the dark power insofar as he was able. He is, after all, a hero. But seduction is a curious thing -- it works on a person from the inside. As I'd said before, Mumm-Ra is playing the long game, willing to "lose" certain battles in order to win the war. Just because Snarf displayed no obvious residual effects in following episodes, don't naively conclude that things weren't still going exactly according to his plan. That's precisely what an evil genius like Mumm-Ra would want you to think.

It's a given that evil beings don't get along with one another. It's not as though they're just on a different team than the heroes -- like playing for the Los Angeles Lakers, or something -- they're evil. They don't play well with others. But the relationship between the ASOE and Mumm-Ra is symbiotic: they need each other. Mumm-Ra knows this and he uses the ASOE to his own ends. In fact, it is conceivable that Mumm-Ra is playing against them as well, such is his strategic vision. In any case, we discuss Mumm-Ra as the ThunderCats' antagonist, because he is. He's the face of evil, the man (or mummy) in charge.

This is unlike, say, the relationship between Skeletor and Hordak, where Skeletor bungled a routine kidnapping, betrayed his boss and got bounced from the operation. Within his sphere, Mumm-Ra is the unquestioned master of evil; but Skeletor himself is only a distant number two (in power, in intelligence, in evil) behind Hordak, not that this is any great accomplishment. If Skeletor ever looks competent, it is only because he's standing next to guys like Trap Jaw and Mer-Man. In fact, that probably explains why he keeps such incompetent subordinates around. It helps him to feel better about himself.

I think the video evidence speaks for itself -- Mumm-Ra nearly defeated the Demolisher single-handedly, so he was greatly diminished by the time Lion-O finished him off. This is no mark against Mumm-Ra (or Lion-O) -- the Demolisher was the Greatest Warrior in the Galaxy. Dude had a skull for a belt buckle, that's how hard he was.

And you also greatly undersell Lion-O's skill. He's a "literal child aged into a man's body"? Transformations can be powerful. I mean, as much as I recognize the superiority of Mumm-Ra and the children of Thundera generally against the so-called "Masters of the Universe," I can still recognize that some of those characters are powerful. Battle Cat, for instance, is a powerful creature. But Cringer...? Is not. Because Battle Cat is a transformed version of Cringer, that doesn't mean that Battle Cat is any less awesome; and Lion-O, whatever his origin, is a powerful and resourceful hero.

You say that Lion-O is "a literal child aged into a man's body"? I'd say that almost describes He-Man, too.

But in all of this, I note that you concentrate on Mumm-Ra's supposed defects, and make little mention of Skeletor himself. It's understandable in a way. If I were you, I wouldn't want to discuss Skeletor either. But it turns out he also has a few... skeletons in his closet:

What I want you to concentrate on here is not the fact that Skeletor loses. Of course he loses. It's not even the humiliating way he loses, or how Orko plays an integral role (and whatever else we can say about them as heroes, Snarf >>> Orko) and even finds time to dunk on Beast Man. Instead, concentrate on how unserious Skeletor and his "threats" seem. The way He-Man and company treat Skeletor as a joke -- and that Skeletor is the only one who doesn't get it.

Mumm-Ra and Skeletor both struggle to overcome their heroic adversaries. But at least Mumm-Ra is taken seriously.

Edited to add: I wish I understood the formatting a little better... sometimes, I feel like such a Skeletor...

My take:  Mum-Ra is so damn powerful that he just messes with the Thundercats for fun.  Sure he loses, but he laughs the whole time because he is "everliving" and he just needs some distraction to fight off boredom.  On the other hand Skeletor just gets his ass handed to him over and over again by He-Man and friends.  I always saw Skeletor as a joke, while Mum-Ra was a badass.