So iv been thinking, through the generations. Nintendo has had a history of adding some fascinating features to there consoles and I have through of a real good idea for there next revision of the Switch. Something Nintendo will probably not do because its Nintendo.

History shows, and one of my favourite features Nintendo has done in my childhood was releasing the Super Game Boy and the GameCube GBA Player. Now if none of you know what that is, they were a separate addon to the SNES and GC which allowed you to plug in your Gameboy and GBA carts into the console and allows you to play them on the big screen, which added bonues features like a Mario Paint to the games for example: changing the backgrounds or mix and match your own colour pallets to the portable games. They were great additions to those consoles which I felt gave them amazing value for the time and still do.

So what if Nintendo included with there new Switch console a 3DS/DS Card slot? Allowing you to play the games on the big screen and on your portable Switch device, obviously removing and simplifying the games so they run without requiring the dual screens or 3D mode.

Like I said, this feature has been done many times by Nintendo in the past and the fact they still make games for the 3DS and that they will probably want to try to convince 3DS owners to switch (Pun not intended) to the Switch. It makes a lot of sense as a whole for Nintendo and allows more access to software sales of 3DS games for Switch only gamers, and gamers who simply don't own a 3DS.

I would love to see this idea be added, though I know Nintendo long enough (Since the 80s) that they most likely wont do this, however it would be a dream for some and a genuine great feature which will promote Switch sales even further.

For me, that would be a megaton announcement for the big N.

I guess they could do that, but many games would only be playable in handheld mode though. Would still be cool to see.

Yeah it would probably require the touch screen etc. I can imagine playing games like Samus Returns, Luigi's Mansion 2, Fire Emblem Awakening, Monster Hunter 4, Animal Crossing New Leaf and Mario Kart 7 on the Switch's bigger screen. There are a lot of cool gems on the 3DS that I feel could go well with the Switch.

Lets face it, they would never do this tough. Why give people an option to play their DS/3DS games for free when they can charge 10-20 bucks for them on the Eshop?

All these game series are getting or already have Switch installments though. Course they wont be the exact same game, but being playable on the big screen is an advantage you can look forward to with the Switch iterations.

My crazy idea: how about a second screen as accessory you stick in the USB-C-port (so at the bottom of the Switch)? No own battery, it would get its power through USB. 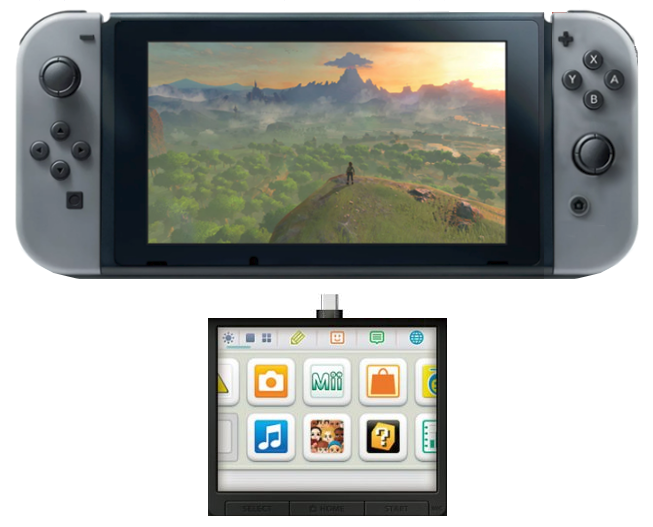 There could be a very light and slim model (only the touchscreen) for digital 3DS and DS games and a thicker model (still light enough to feel comfortable) with a slot for DS/3DS cards.

I guess I am seeing it as the 3DS hardware has become ancient now and sliding in a 3DS slot into the Switch means Nintendo can stop production on the 3DS (If they haven't already) and drive the 3DS market to the Switch. Eshop would probably counter this however 3DS games cost more than $20 so they can still physically sell $40 3DS games for Switch users instead of going the Eshop route or buying those games on ancient hardware that is separate to there mainline machine.

I agree that Nintendo wont likely do it but it would be cool.

That idea would solve the Dual Screen problem with playing the games on the Switch. Something like this I can see Nintendo possibly looking into if they ever decide to merge there markets together and include this feature on the Switch. Its simple, they don't have to butcher the games to work on it and it looks modern.

These GameBoy BC features worked incredibly well for Nintendo in the past and this idea has no real negative feedback if they decide to go for it.

Wouldn't this be a problem for the already suspect battery life?