You are right about it being Stig, not Cory. I will correct that in OP. I do distinctly remember reading that reasons were varied for it's cancellation. Not meeting goals but goal was to differentiate itself from Destiny and or other games(looking at leaked Concept Art that other game would be Horizon Zero Dawn). I can't seem to find any of the original articles with quotes from the ex developers who got layed off that mentioned it. 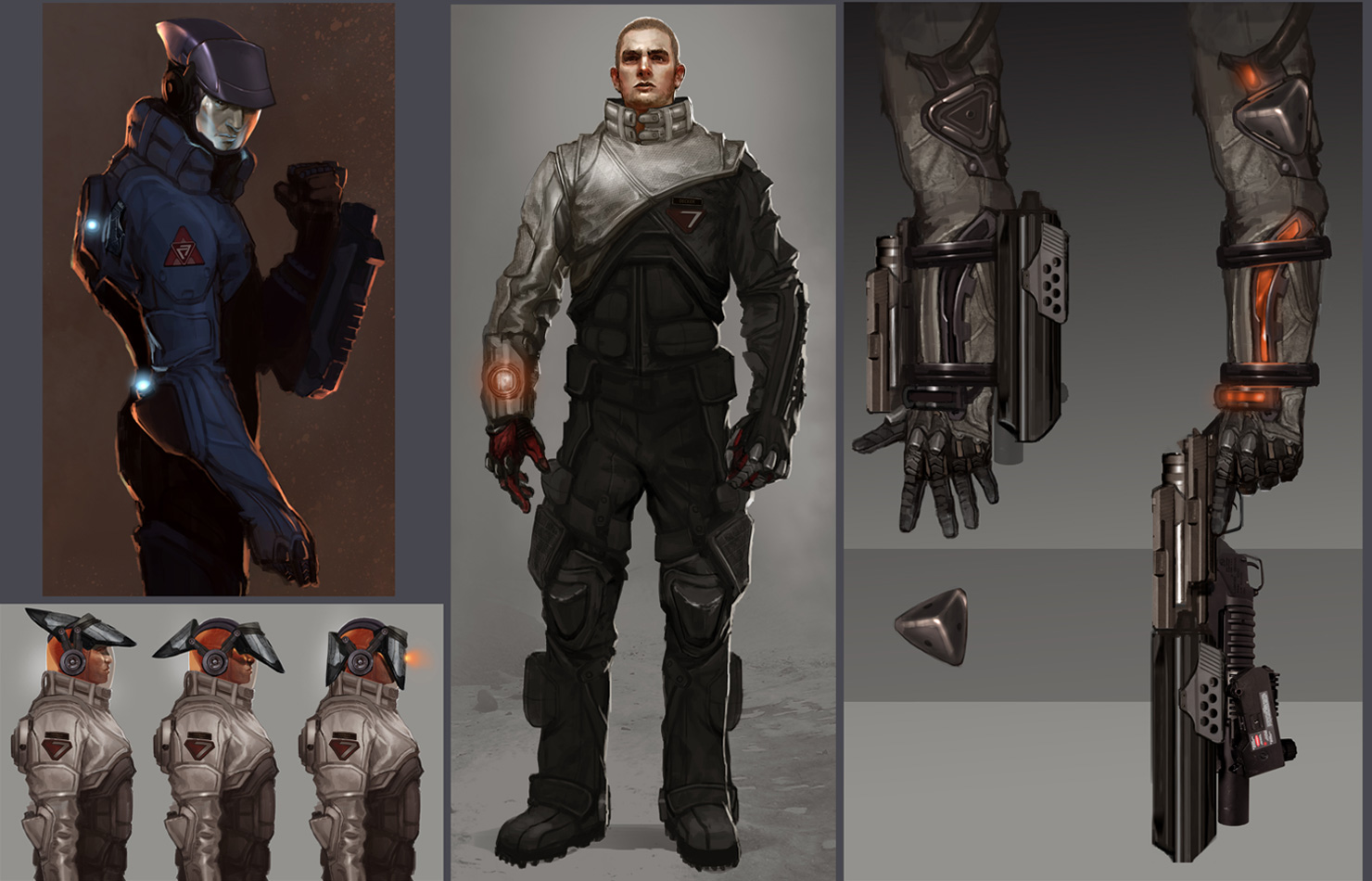 Looking at this concept art now tho has me really bummed they didn't release this game. I think I would be far more interested in this title than whatever Destiny is :(

What Sony has done is identified their strength, Single Player Story Driven gaming, and doubled down on it in a climate that wasn't concentrating on that even tho the fanbase still wants it. Meanwhile they have identified their weakness, MP gaming, and have wisely utilized their market pull to get the biggest MP game developers aligned with them.

PS4 must have like 60%+ market share at least of all Multiplat multiplayer games sold. Games that sell 5-20 million on their console alone. Sony will make royalties from that but also the money from these games excessive Microtransactions.

Now that I am thinking about it, it would be usueful to pull the actual numbers of these game's sales on PS4 vs their own personal outings.

This shows a pretty consistent pattern of big MP games with Sony co-marketing selling double or more to the competition. That is just money in the bank, in a situation Sony paid a fraction of the cost of internal game development.
Now to look at internal exclusive endevours....
What this shows is Sony's big MP attempts were not successful(in comparison to Microsoft's). MS was at the top of their game with big Multiplayer shooters in 360 era, but found stiff competition  in this gen by 3rd parties, huge drops in their signature series userbase. The XB1 release performance is still good, where they will make money on the game and the microtransactions/DLC.  For all Halo and Gears of War's success you do have to think their cost dwarfs what co marketing costs, which neuters their value.
-
Meanwhile Playstation's signature story driven games are thriving. Uncharted and TLOU are over 10million, both have online components but realistically they are not what is appealing to audiences. . At best they both might have garnered 10% of their fanbase playing the online components but definitely not now in face of all the Third Party offerings. There Killzone series unfortunately has shown no growth, which wasn't good. It is a no brainer why they had GG shift to Horizon which benefits just like all their other games by not be Multiplayer centered, 7+ million for a new IP.
---------
Yet.....I still think the linchpin holding this strategy together is Third Party and Sony is well aware you cannot entirely depend on them. If they lost their comarketing deals next gen, and/or are not market leader by a huge sum to make the trade off worthwhile, it will be a problem. I think they need to have an almost assured Exclusive MP title on standby for such a situation.

I have a slightly different take on the PS4's success.  Sony's strategy for the PS4 wasn't bad, but it wasn't exceptionally good either.  To me it doesn't look terribly different than their PS3 strategy.  People say that PS4 has great first party games like God of War, Uncharted and the Last of Us.  Weren't these franchises also available on the PS3?  But with the PS3, Sony lost money and now they are making money.  What changed?

The PS3 launched a year after the XBox360 which was already doing decently in the marketplace.  It also launched at the same time as the Wii which broke all sorts of sales records during its first 3 years on the market.  I mean for anyone paying attention during generation 7, the PS3 was getting hammered from both sides.  The Wii was topping the charts in both software and hardware while the Xbox360 had a much better online service and it often had a earlier release date for multiplatform games.

The PS4 did not have this kind of competition.  You could see it right when these consoles were first presented at E3.  The Wii U was stupid and the XB1 was evil.  Both of the consoles looked repulsive to consumers.  Then there was the PS4, reasonably priced and not offensive in any way like the other two consoles.  Why wouldn't people want a PS4?  It was the only decent choice available.  Since then, the Wii U was retired early, while Microsoft seems to have mostly given up on the XB1 as well.  The PS4 never really had any decent competition.

It's not Sony that really did anything different.  It's Microsoft and Nintendo.  The PS4 was so successful, because its competitors sucked.

They're not focusing on it, the ones they've made havent stuck.

And there's a million 3rd party MP games, no need to add to that when there aren't a million experiences out on this gen comparable to GOW, Uncharted, Horizon etc.

Playstation has still dominated 3/4 participating generations.  By huge margins. I think it's unlikely each time were a fluke of circumstances, at least as a whole. If anything, The PS3 is the anomoly from the norm. PS brand is strong, it is usually a cheaper comparable if not a more powerful alternative, and it is usually known to get the widest selection of games in various genres. That is not an accident. They took a big gamble with PS3 being a bit too tech forward, more costly, and a year late. Even then the PS3 ended up in 2nd Place(slim lead).

To drum it all up to weak competition is to say that in the last 4 gens the competition was not up to par to dethrone them which would still make them the stand out quality console manufacture.It comes down to the choices Sony makes for their business are usually the right ones when it comes to Playstation.

2) Both the PS2 and PS4 faced weak competition.  The Gamecube's library was as bad as the Wii U's, and the original XBox was just Microsoft's first try.  They didn't put the same level of effort into the original XBox that they did into the 360.  I do have to praise Sony for the original Playstation though.  Nintendo was the king of gaming and they dethroned the king.  That was legitimately impressive.

I agree with your sentiment, I am just saying there are not even that many console generations, we are on the 8th. If Sony was able to sweeep 3/4 generations  its because the competition is on average inferior to theirs. That basically means most consoles stumble out the gate and what we are calling poor performance is really the norm.

I agree that the 7th Gen is where the Playstation met it's steepest competition. Xbox 360 had a lot of positive air going for it before the PS3 even released. Year head start, $100 cheaper, and easier to develop for. While the PS3 basically had cinder blocks tied around it's ankles with its bloated price point and obscure tech design. It also was the gen that took place during a recession which forced many would be buyers to look for cheaper alternatives (IE Wii). Yet, PS3 was gaining on 360 for half the gen and eventually passed it. That was no small feat. Not to mention towards the end both 360 and PS3 shrunk the gap between them and the Wii.

I wanted to say this. Sony do actually make a decent amount of multiplayer content.

However OP you do have a point. Sony smartly focus most of their attention on the single player scene. There was a void left there as a result of third parties focusing on multiplayer components too much. Another aspect is Sony get 30% of digital sales on psn from third parties including micro transactions. So they greatly benefit when third parties thrive on their platform.

Yeah I have a hard time believing this. Sony cancelled this game because of resemblances to Destiny but were ok continually supporting a zombie game, a genre that already has tons of games in it, and a game that ppl thought looked like TloU?

What 3rd party publishers do and what Sony does is irrelevant to one another. This game was reportedly in development for 4 years before it was cancelled. No one is cancelling a game that has been in development that long, just dropping the staff and losing all that time, resources and money just because it seemed similar to another game. It was dropped because the project wasn't coming together and at some point its becoming a waste of money/ resources etc.
For example, Driveclub was meant to initially release in 2014, the same year we got Grid AutoSport (before DC) and The Crew (after DC). Those all share similarities, why not cancel that?

I am not saying that similarities didnt play a role at all but it doesn't really make sense from any perspective that it was some major reason. Destiny focuses on MP. This sci fi game was most likely SP based, especially as it was designed as an open world game. Insiders on Neogaf (at the time) mentioned it wasnt meeting milestones. Cory Barlog even tweeted that the info about being similar to Destiny was 'nonsense'.

Ultimately, we will never really know but I doubt it was because the game was too similar to another game.