When I was 12 I had an emotional connection with my Xbox too. It became physical. Needless to say, my disc drive stopped working the next day. R.I.P.

Coming from the guy who randomly called my use of ellipsis sexy? Really John?

I mostly gamed on PC at that stage of my life and those pieces of crap broke all the time. It was hard to get emotionally attached to random bad sectors and the regular windows 95 blue screen of death lol.

I did get sort of emotionally attached to my amp I saved up a lot of money for. Flagship Yamaha model, future proof (back then) 7 channel amplifier with digital and optical audio, component video switching and AC3, DTS capabilities before DVD even came out. It was a 62 pound monster, center of my entertainment hub with TV, CRT projector, S-VHS recorders, LD, PC, PS, PS2, DC, N64 all cross connected to it. My PC would mix CD audio with game sound and send it back optically to the amp together with S-VHS video out signal to the projector, including TV pip from the S-VHS vcr mixed in via a capture card in the PC.

I took it with me when I moved overseas and bought a 1200 watt voltage upconverter for it and the REL storm subwoofer as they both run on 220 volts. I always left it on, it was never allowed to cool down, plus my theory was that as long as warm air rises out of the top, dust can't drift down inside it. It worked as it was a night and day difference with the dust collector my PC was. I still have it sitting in the basement as unfortunately HDMI took over. I sadly replaced it when the Wii U came out as that didn't have optical audio as an option, plus I was out of HDMI inputs on my tv. It is a solid piece of tech which I don't know if I can get rid of. Too many movies and games played through that piece of equipment.

Back then my goal was to use every input on the rear panel! 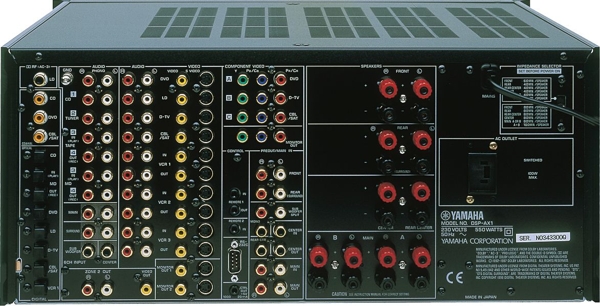 I got close, I don't miss the enormous cable mess though.

No no. To tell you the truth, I thought so myself this morning.

Everything from a month ago and beyond was more or less 73% serious and 27% joking, now it's like 60% joking and 40% serious. I was about to put links to all my recent serious comments, but I realized that'd be dishonest. I agree with you.

Although in this case I was being somewhat truthful.

I actually did have an Xbox 360 that I cherished. It was pretty much my gateway to the internet. Yes, as an 10/11 year old, I was extremely late to the party. But before, I hardly used the internet at all.

I played Halo:Reach and I loved it. Then one day I realized that I loved the campaign so much, I couldn't help but want to play online multiplayer. I remember at the time my mother was like "Why do you want to play online? Isn't the point of this game to shoot aliens? Why would you want to shoot other people." It's so odd to think about because she's not that kind of a parent at all. Still, it took a while to get used to Halo, and then later Gears of War (a bit more understandable).

Halo:Reach and Gears of War 3 were the pinnacle of online gaming for me, and even gaming as a whole. I've had very few experiences afterwards that were as good (really just Dark Souls and Metroid:Prime have come close to benefiting my outlook on gaming as much). I remember I was proud of being in a "clan", practically being one of the most respected members of it despite being the youngest member there (being a squeaker among people who were 2-4 years older was a hard life). Gears 3 still has the best unlock system of any multiplayer game.

Then one day, my disc drive stopped working. I had an original XBox 360 that had supposedly been refurbished 2 or 3 times (that's a second hand account so who knows how exaggerated that is). At the time though, I didn't understand  that. I got what a refurbished console was, but I didn't get how lucky I was to even have something that damaged that changed my life for a year or slightly more. I was so mad I basically said "fuck Microsoft!" and got a PS3 to replace it instead. It came with the Uncharted trilogy for FREE. Say whatever you want about Gamestop, the fact that they took a shitty broken Xbox 360 White that had already been refurbished multiple times with only like five or six physical games and gave me an entire 320 GB PS3 Slim with 3 Uncharted games, when Uncharted 3 was only a few months old (maybe even less)? Fucking awesome.

I got an Xbox 360 later that year, but it wasn't the same. I still had some great experiences (Dark Souls), but tons of disappointments (Halo 4, Gears of War:Judgment, Dark Souls 2).

My gaming life has never been the same.

...Wait a minute... you tried to make the same sexual joke before you criticized me for making it? Ugh. Screw you, John! At least I know the OP!

I do have a special attachment to my consoles since I had the PS2. They provided me with tons of hours of entertainment and then some, so it makes sense that I have fond memories of it and create a bond with it.

Pokemon White 2, Super Mario Galaxy, and The Legend of Zelda: Skyward Sword are all games I would say I have an emotional connection to.

So many great games, from the GTA trilogy, to ratchet and clank: up your arsenal, to shadow of the colossus, to burnout 3: takedown.

Pokemon Red original cartridge version. I still remember the day I ran into the store and frantically was looking for it hoping it wasn't sold out because it just released. I was so nervous and a kid. Also, my GameCube because that was my favorite console ever released.

Do you also kiss it goodnight?

No, but I hum Zelda's Lullaby.