Forums - Gaming Discussion - Will the BF5 Failure Slow The Tide of SJW Agendas in Gaming?

Will BF5 Fiasco scare other companies from pushing agendas in games?

Jesus. Why not have the entire gaming industry crash and burn? That'll show those SJWs!

Yeah. That'll teach companies to not put in a protag that isn't a white hetero cis male.

In all seriousness, I cannot understand the mental process going on when someone looks at a trailer for an action game, sees a woman as a protagonist (at least where they feel one should not be), and has an absolute total freak out and expresses a deep-seated "need" to bitch about it on the internet and threaten (or actually go through with) a boycott. So Battlefield V won't be a total sausage-fest. So what? "It's not realistic?" Again, so what? It's a video game. You fucking play it. Y'know, to have fun. You can't have fun because your WW2 shooter has a woman? Why? What's your malfunction? Video games are only superficially realistic, and they have to be because they wouldn't be fun. If we really wanted it to be realistic, why not ensure every bit of tech is absolutely period accurate to the day and functions exactly as it did in real life (including all the jams, breaks, limited ammo, no half-mag reloads, etc. And while we're at it, why not have realistic injuries and permadeath as features to really ramp up the tension of potentially getting mowed down by MG42 fire two seconds after the boat ramps come down on Normandy? Maybe disease and hours of marching and non-combat activities to give it that added touch of authenticity.

But I honestly doubt that "realism" was the driving force of the complaints. 18 years ago EA put a woman front and center in a WW2 game: 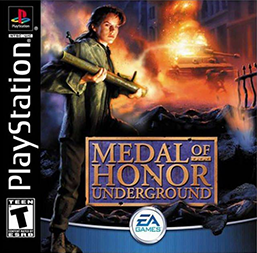 And we didn't hear a fucking peep. Then again, this was before social media, before the onslaught of manchildren that was Gamergate, before every wingnut on the internet decided to openly and loudly scream "ESS JAY DOUBLE-U!" at everything that offended their warped and fragile sensibilities. I've read the comments on Youtube and elsewhere in the months since the reveal. The whole "muh historical accuracy" is a smokescreen. And the whole "Well, that EA rep said such and such" thing, well, he wouldn't have said anything had the usual suspects kept their traps shut and not had a rage fit. Honestly, I wish everybody left, right, and center would learn to just shut the hell up and learn to enjoy a game, movie, etc., based on its quality. Is the gameplay and story good? Then shut up and play it. Seriously, it's shit like this that makes me wish the internet wasn't a thing.

EDIT: And yes, I know the protagonist of MoH: Underground was based on a real person, which further adds to my point that "realism" isn't the reason people are upset. Female combatants in WW2, even in the Western front, were not unheard of, something I forgot to mention before. Battlefield V's inclusion of a female protagonist is not implausible or unrealistic. The "historical accuracy" thing is, again, a smokescreen as far as I can tell, used by people who just want to gripe about "SJWs" and "forced diversity" under the guise of "just being history buffs."

That's just it though. Much of the controversies surrounding "SJW Propoganda" doesn't actually have anything to do with SJWs. Inclusiveness is not an idea that is mutually exclusive with SJWs or the far left.

SJW in gaming is bad there should be any gore or sexual freedoms its a damn game thats why rating systems exist
being liberal is good it means progress to allowing minorities to have an equal chance and other positive things such as not letting those who hit rock bottom to starve to death or their kids to die of a fever do to not being able to afford health care
BFV is not failing so wth? It looks amazing! not perfect but still better than fortnite and that new COD abomination also better than destiny
I am not a woman or handicap hater so why would i not buy the game? if racist misogynists are so angry at a trailer leading to them not playing is only see that as a win :D

seeing you love doom so much, how can you be happy conservatives try and blame doom for children becoming satanists and mass shooters?

So, what's the controversy here? It's a video game, not a documentary. Battlefield is already nowhere near being an accurate simulation of war, so who cares about the inclusion of women as playable characters?

While i do agree that battlefield V does seems like SJW pandering. I do think some are going overboard and trying to attack certain works that have their own original characters and don't try to change history/existing characters. One example would be the A Hat in time dlc where the developers added a black character in the game. there were some people calling it SJW pandering when it's clearly not. the other example is the Last of us 2 where people got mad over two girls kissing. Ellie was already an established gay character so i don't understand the fuss. In some cases it seems to me people hate something just because it's reprensenting a group that those people don't like. so they yell SJW! to try to disguise their hate towards that group.

I was just simply saying what it would actually take to stop the political agendas being pushed in games.  The only other option is to just play games and hope the fad dies on its own.  At the end of the day, all the crying and moaning will not change a thing.  Where one game fails, another pushing a similar agenda will succeed and the cycle will continue.

That's part of what I find so funny. A lot of people who are trying to make it look like this isn't about women or "SJWs" say something along the lines of "Ohhh if they put it on the eastern front it would be accurate and no one would care!"

yes, the hundreds of thousands of people who are fighting against DICE are totally historians who wouldn't care if the genders were relegated to a few maps /s