Forums - Gaming Discussion - Will the BF5 Failure Slow The Tide of SJW Agendas in Gaming?

Will BF5 Fiasco scare other companies from pushing agendas in games?

Did WWE ever come at you hard with pro-life arguments?

battlefield not going to fail.and other companies not going to stop putting women in their games because of this.

It's not that you can't have a badly written minority character. It's when it's clear you're entire push was "Look, my character is from an underrepresented group!" and you clearly made no effort to make an actual character.

It's called tokenism, and the left used to be against it. Now they support it's usage en masse.

Image you pay someone to get broke 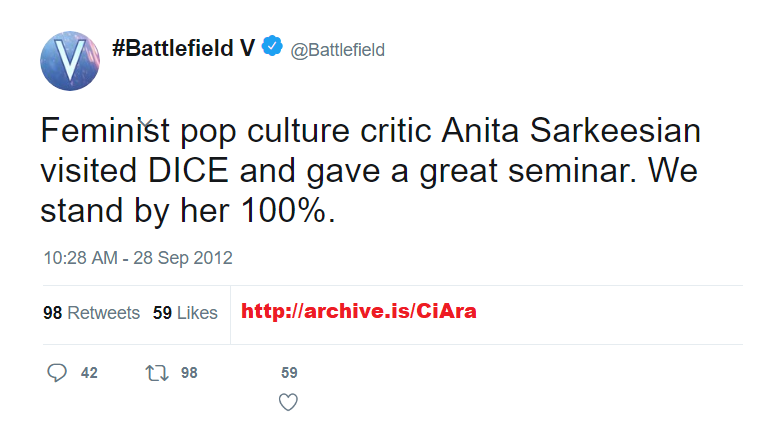 Yep. Just shows the path they were heading down. Funny how they used to either be subtle about it or they didn't let it infect their games/movies. Now, they are so in your face about it that even some center-left people are rejecting it.

Excellent point that is often overlooked.

One can only hope.

I wish people would stop making a big deal about this stuff one way or another - the race and gender of real life people honestly makes ZERO difference, so the gender and race of FICTIONAL video game characters being somehow meaningful to people is simply laughable to me. Like, these are just digital renderings of 3D models designed to look like people.. Have we really come to be so obsessed with race and gender? I thought we were more evolved than this.. Just like in real life, where a person's actions, characteristics, and overall quality as a human being should be all that matters - the quality of the entertainment and of the character should be the only things that matter in the realm of fiction.

I suppose I just wish these companies would quit making such a big deal about propping up these "underrepresented characters" as if they're some kind of hero for putting a woman in their film or video game. Like, isn't this mentality somewhat racist/sexist in and of itself? Because you're placing value in RACE and SEX over all other elements.. Furthermore, you're using these people as props or human shields to feed your massive egos and look virtuous. I wish we can just put women and poc in entertainment and just leave it at that.. Like, you never here a company saying "hey white people! Come play our game because there's plenty of you in our game!" So why should the reverse exist? Isn't it merely the other side of the same ugly identity politic coin at the end of the day?

And especially - stop attacking those consumers who don't like said product because you'd decided they're racist or sexist based off nothing but your own hunch. People are beginning to see this as a fool-proof way to make a shitty product as all you have to do is fall back on attacking the "lowly, hateful consumer" who isn't on "our level of virtue." It's become a safe way to excuse creating lazy art and entertainment without having to answer to anybody when the backlash hits (see Ghostbusters). I think THIS is what most are voicing their displeasure about, NOT the simple fact that women and poc are being placed in these products in the first place. Like, why the hell would they care if these people are being represented anyway? Lol..

Additionally, I can obviously only speak from the perspective of a white dude (well 3rd gen Italian Polish dude to be specific :P) but if I were a member of one of these groups and these people were making such a big deal about the appearance of my group in said piece of entertainment and that somehow I should be ecstatic simply because these people share my genitals or skin color, that would probably come across as majorly pandering, insincere, and insignificant. Now, if we're talking about REAL issues and real discrimination in society, of course that's a different story.

You can put a lot of effort into a character and it still be shit. Quality isn't the most important thing, it's effort.

EA has had a lot of bad pr recently, but the agenda of the game doesn't help either. I have no issue with a lesbian kiss or whatever, as long as it adds character and doesn't interfere with the experience of the game. But don't make a game to express your political opinions of whatever else because I'm not gonna enjoy it. Don't give a fuck if it's sjw shit or you want everyone to be white supremacists in your game, if your pulling that crap it makes it less enjoyable for the average gamer and means less sales.