LOL, Rolling Stone, not exactly the most credible source. Trump Derangement Syndrome is an awful affliction, you should do something about it

1) the popular vote (most people) was won by Hillary.  Trump is in office because the american voteing system isnt fair.

2) Russian Propaganda campagnes on social media helped Trump. Again this isnt really a fair way to win.
Without this, he likely wouldnt have won the election.

3) People that only cry fake news, without siteing the reason for such, as just as bad as those that promote fake news, if not worse.
We live in a enlightened age, things writen are either proven true or false, but assumeing everything writen by news sites is false, is like going back to the dark ages.

Even if this was true, how is it Trump's fault? Is the president somehow responsible for the actions of every sick individual in the country?
And how do people suppose the illegal border activity should be fixed? The illegal parents (sometimes they aren't even the parents of the kids they're with) need to be processed and the kids have to go somewhere for the duration. Should they just be left at the border by themselves, or what? Or maybe go into the real cells where adults are kept?
Or should these people maybe not try to cross the border illegally and endanger their kids doing so? Should the Mexican people maybe take their country back from the drug cartels and corrupt politicians so that they don't have to risk everything trying to get into another country unlawfully?
Maybe the US could make this a joint military operation with them, just go in there and wipe the cartels out. That would be win-win.

If this is true, it's not Drumpf or Obama at fault but rather the people working at ICE. It would be molestors employing molestors. It's disgusting and needs to stop, if happening. Nothing positive to add to that in such a disgusting situation and don't feel like joking even about the USA. Just sad

CTV is also reporting this.

With their own sources and facts? Not saying this is fake news, but plenty of times all it takes is one news source to run something and then all the others run that story based off that story.

I mean how much coverage did that Rolling Stones article get about some girl getting gang raped by a fraternity, which turned out to be a complete lie.

Again, not saying this story is false. The fake part though is the blaming of Trump. Trump is not responsible for whatever ICE happens to be doing "illegally". Just as I don't blame Obama for this issue, if it had made the news waves back in 2014 when it apparently had started. I mean Teachers are government employees, should we start blaming Trump for each teacher that rapes an under aged child?

Some of these child internment camps already had a history of sexual misconduct and abuse against children. So I'm sadly not surprised to read that headline if it's true.
As for the drugged part, there's an ongoing litigation from a parent of a child who was drugged at one of these places some years ago.

I can dig up the links for these if anyone is interested. Have them saved somewhere.

Important to note that NOT ALL of them came to the United States illegally. There were a couple of known cases where people who came in legally to seek asylum were separated as well. But these separations were mistakes, and not common. Still.

But separation from their parents with no plan on how to reunite them is seen as the merciful thing by some.
Look at this national guardsman for example: 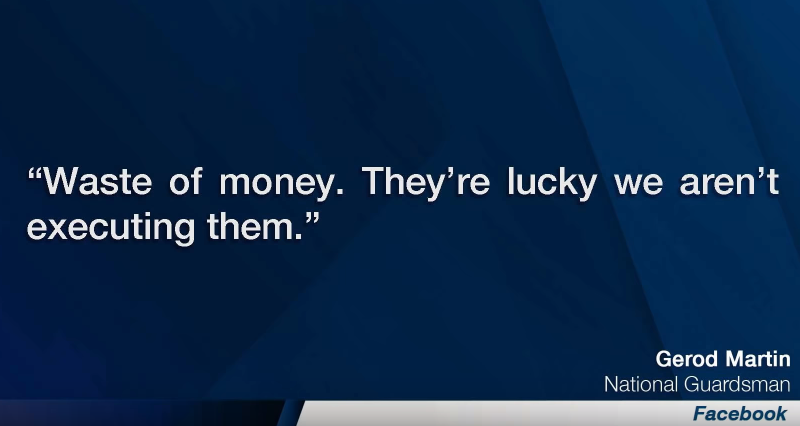 They're lucky we aren't executing them....

While I'm sure people who think this way are in a minority, there really shouldn't even be 1 person on this planet who think we should execute children who come with their parents to a new country. Right...?

"his collusion with Russia"

the united states has been in collusion with russia for decades in different areas... most notably the space program:

"Russia and the United States have agreed to cooperate on a Nasa-led programme to build the first lunar space station, part of a long-term project to send humans to Mars."

It’s amazing how boldly you talk about topics you don’t understand.  The child in the article you posted was discussing his experience since 2014.  Do you know what that means or need me to spell it out for you?