Some business is scummy in nature. 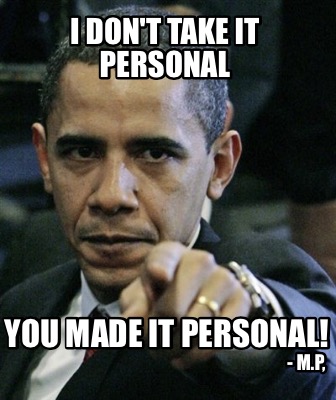 The what we know point is a poor argument. Basically all your saying is I don't want to think any further than what's thrown in my face by the "authorities" in media. Sheep move because the dog is 'in charge'. In reality, the human is standing there taking everything in and directing the dog to make the sheep do what they want, and the sheep have no clue.

As for the too much info comment, not sure why all the posts so far weren't a problem, yet a bunch at once is too much? Why does separating by multiple posts make it easier? Too many solid points in a row a lot harder to defend? I seriously don't know how much closer I could have laid the dots out. The line they create isn't far from linear.

'Losing interest in reading all of it'. So if it's not in Twitter format it's not worth reading? It explains your strong point of view of how people themselves are almost never to blame but extremely large groups of people with power are the root of all evil.

This is part of the reason big corporations don't listen to the people all that much. I'm sure PS has already thought to themselves, 'we can't explain the entire situation in a tweet, and if we write a few paragraphs on any other platform they'll never read it anyway, and a bunch of cross play pushers will just take it all out of context and tweet a bunch of BS and make us look bad, so let's just go with a typical corporate BS response and leave them all hanging'.

'Can't beat'm? Meme them!' In all seriousness though, if you and others really want PS to try and work on the account issue and CP, when they ask why, they are going to expect way more than just, 'because it would be fun and XB and Nin are doing it'. That will just get the door or a Fortnite bundle thrown in your face.  Good luck.

Sure, a very small short lived victory. Losing one small almost meaningless battle, is totally worth the bricks of gold PS were able to retrieve because of it. If they are smart, which I'll assume they are, they are going use the value of that gold to create new cool stuff that nobody else has. They will then decide to free the accounts and allow CP and everyone will cheer and be happy since they can now play with their friends. Meanwhile MS and Nin will be in tears because the customers they thought they were going to gain because of this, are all buying PS products anyway because of the new cool stuff they offer. Heck, PS can just use it to make PS5 super cheap for the performance at launch and that's probably more than enough. Winning this war will be meaningless to XB and Nin if they find out PS has new weapons of mass destruction in their arsenal now. It's all business tactics behind the scenes one way or another.

Eric, are you prepared to debunk the following screenshot?

I ask because this is what was provided by "authorities" in media. Variety, for example: https://variety.com/2018/gaming/news/fortnite-switch-ps4-accounts-1202843175/

All I'm asking is for you to shorten up your posts. It's what I try to do: keep things brief and to the point and not try to use overly-complicated metaphors.

Sony putting out "a typical corporate BS response" does nothing more than make Sony look bad. It also not only fuels the efforts of the "cross play pushers" but also sours more moderate spectators.

Sony's not very smart if your description of them is to be believed. I think they should have gone with the "writing a few paragraphs" approach and at least maybe win over moderate people who will have made the effort to read Sony's response in full.

The issue is damaging to their image.

Sony's not "4theplayer" nor is PS always "the best place to play" as their marketing regularly points out.

Well it seemed like you were trying to see my points, but weren't quite there, so I felt the need to elaborate. Apparently I was mistaken I guess.

'The Fortnite account is associated with a platform we knowingly gave into even though we knew what the better decision would have been for the gamers but instead we caved. We can't do anything about it because we already signed a contract. We shouldn't have done that but it's too late now. Please don't hate us and open a new account and continue to play our game while purchasing more micro-transactions'.   Unless Nin is the one blocking PS accounts from being on Switch, which is more unlikely, that's my take on it.

PS gave a horrible PR response and still won me over so. I have no issue pointing out problems when any brand crosses the line, and while PS is getting closer, they haven't quite got there yet.

You make this statement sound like it's something that the rest of us don't get.

Of course the decision Sony has taken here is to benefit itself. They've calculated that a certain amount of gamer backlash is worth it for the extra dough with the added bonus of throwing a spanner in the works of its competitors.

What the gaming community can do is create a larger backlash than Sony anticipated and change the equation to a point where Sony doesn't think the extra coin they're making is worth the tarnishing of their brand.

Companies, including Sony, obviously do care how they're perceived otherwise they wouldn't have massive PR departments on their payroll... So to imply that best business practice = most money over the short-term is overly-simplistic & a tad naive.

If you want evidence just look at what the community's reaction achieved with SWBF2 or Shadow of War.

If everybody shares your passive attitude there's zero chance that Sony will change their stance or at least make them think twice before repeating a similar move in the future.

Try arguing on the side of the consumer (i.e. yourself) rather than being an apologist for a faceless corporation...

Are you talking about blocking account, or crossplay? I think they should fix the blocking the account proble,, as for crossplay, i don't see sony ever doing it, they worked to build a huge online community if they open it up, they could lose tons of playstation console sales. sony will only allow if its starts effecting sales, where they aren't dominating.

I'm referring to blocking accounts. Not engaging in cross-play is another scenario and whilst I can see some gamers being disappointed, I don't think you can aim the same type of criticism at Sony for that as they are open and honest about their stance, nobody is being blind-sided or having a 3rd party account hijacked.

Still, their position on cross-play may bite them in the ass next generation, when there are potentially 60+ million switch owners out there who are potentially deciding between PS5 & XB2. That's assuming of course that they retain the same policy for their next PS.

Even if we assume there we no further dealings, its pretty obvious that whatever deal they made was for competition console devices, and not specifically just the X1. Either way, Sony not having cross-play with either X1 or Switch before Fortnite was released, and then not allowing content transfer with X1, only makes the issue with Switch even more obvious. Like, its possible they didnt know but in no way is it probable.

And I by no means argue that EG dont want a more open environment. But they accepted the terms given to them from Sony. because money was a lot more important to them than being pro-consumer. Agreeing and signing that agreement is more than just some blame. They had a role to play in all of this.