1 - Yes you saw my answer for me not caring, have also seem me saying that I know all bases ask for ports? You didn't mention it.

2 - When you enter a convo with a question isn't it expected for it to have to do with the question?

3 - I'm not refusing to see nothing. He gave one site, you could give others, you don't. You want us to believe that you know better and don't even have to provide source for it.

4 - You were not raised to bring your own research you mean right? Because you may spin as you want but it gone from.

Me saying there are PC gamers begging port all the time.
You asking if console gamers don't do the same.

He sendind some source for PC gamers begging a lot more.

You saying that is invalid because it just show a portion of the data. Refuses to show what is the real data that you claim.

So he did his work and provided his conclusion, you want to deny his data without putting anything.

Could you get a better example for your OP? That's not even a true exclusive, it was released on PC, even back around the time the game was still pretty new.

If a developer wants to make their game/series to a platform then they have that right because its their vision and choice. No one should question that and call it stupid/dumb/etc.

1. I didn't need to, but I mentioned it because there are times where once thinks that because they feel they don't need something, they think someone else doesn't need it either.

2. I asked the question, and you brought Azz and a mere mention of a past conversation that had nothing to do with this topic. That is not answering my question.

3. Yes you are. You don't want to venture further than what is presented before you. One link and you're "satisfied" with the results. You do not show any form of questioning for it, but you do so for those that stand against it and question it itself.

Again, I know the difference, as do others out there. I am not doing work for him, so he and you can just turn around on a whim and knock it over like a child's plaything. I have seen that far too often on this site. You go out and open your eyes, or you remain here with your eyes closed tight.

4. No, there is no spin. Definitely no spinning on my personal upbringing. Dare not question that, not unless you want to go down a path you will regret coming from.

I asked, because I know there are people out there, who ask for console ports of PC games. I've seen it with Frostpunk, I've seen it with Two point Hospital, They are Billions, Star Citizen, and other indie titles out there that have had PC style marketing, or being sold on PC in general. When there is no console mention, people will ask, just like PC gamers ask the same. It is not a one way street, and trying to quantify it is just being plain asinine about it.

The next reply better not be a complete repeat of those last two sentences you've posted (twice already), because that just goes right back into a loop and forced derailment.

I'm refusing? How do you know i didn't look for any other data? What kind of data am i suppose to look for? Are you saying you have data to prove your point, but you're refusing to share? By all means, do. Because there is no other way to deliver those words in bold to a conclusive outcome.

I gave you a little insight. You... still nothing.

There is no question of there being individuals asking if such n such game will go multiplat. There are even those who are oblivious to the reality of certain Playstation exclusives that will never be on any other platform. Even on youtube. Actually, i've seen this only on youtube. Nowhere else.

The question is, to what extent?

The problem with that shallow idiom...

There aren't many cherries to pick. Star Citizen is pretty much the only cherry. Anything else worthy will come to consoles anyway. No need for begging.

That's... something. What else would gain enough (at)traction to cause widespread desire amongst gamers?

I think i never saw anyone showing interest in getting ports for exclusive crap games. *The kind of games PC certainly has plenty of. But suit yourself. Anything goes. Time to give your...

I gave you time, time to go and look for other sources, rather than just one source and calling it a day, while labling the entire platform as one thing. That's not my job to do that, that's yours.

Your "insight" was as common as pulling up Change.org and pasting the closest search result, which even then was specified at best, rather than randomly pulled.

Except not everything comes to consoles. Just like how everything doesn't come to PC either (though emulation can be considered one such method).

"exclusive crap games", so you're basically now going to call PC games crap, no hiding that I see.

You painted the platform with a brush and now you're not even trying to hide it. That's on you, not me mate.

1 - You are so confusing. You answer half so you can keep pushing around.

2 - I didn't brought Azz to not answer. I was talking to him, and there was a tree quote. If you wanted to ask something not inside the topic of the conversation you are the one that needs to point it out. You entered asking something wanting nothing with the topic, not the other way around.

3 - The burden of proof is on you, and you are assuming I'm satisfied. Are you going to just keep spining around demanding others believe in you against sources with you just saying it is what you said it is?

4 - You want to threaten someone do that to someone that is afraid of you.

The Burden of Proof always lays with the one making the claim.

That is Anecdotal of course. :P

I disagree. On Major Nelsons site, I saw people Port Begging for Age of Empires.
It does actually happen.

Who said what, who made what claim? Read what others actually write, don't echo what you think you had read.

Not simply asking. C-O-M-P-L-A-I-N-I-N-G, aka begging for a port, which was the case with Nioh and Bloodborne as i have pointed out. As in certain individuals in this thread are COMPLAINING about exclusivity. Have we seen console gamer crowds complaining about not getting prominent PC exclusives (eg. Star Citizen, Star Craft) to the same magnitude as the "PC Beggar Race" has complained about? Complaining all the time, resp. port begging en masse, resp. desperate pleas of numerous individuals for a game to be ported with little to no chance of ever coming to realization?

No, we have not. Not even close. That is why we have beautiful "PC Beggar Race" memes filled by the creative spirit of wonderful human beings. 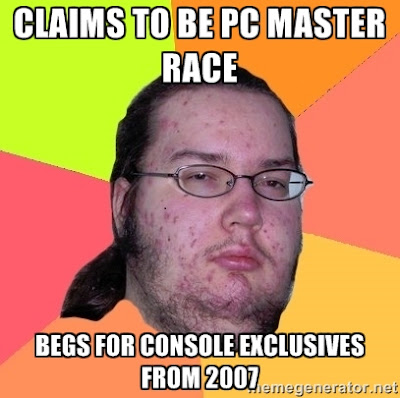 Shall i point out the sarcasm? I better do, before someone gets all foamy.

You babble much. Asinine is how you refuse to give any evidence to your claim. You got nothing?

Of course, because based on this premise, it virtually needs only one person to ask and you're of the hook. But how asinine is that? Yeahyeah, let's not look into the details, let's completely ignore the meaning and context of used words and redefine them to your advantage.

No, i see. You're one of those who can't handle critical bits, getting all riled up when he thinks someone pisses on his beloved piece of hardware.

What i really said (like it's not there for everyone to see):

"Has plenty of" ... You should pwactice your engrish. It isn't my mother tounge either, but i don't tend to misconstrue words of other people as frequently as you. I gotta admit, i got a lot of satisfaction out of your reaction to my obvious tease. A tease because of how ridiculous it is of you trying to paint me as the villain. Well, what other thing to do? You got nothing else, that's why you feel the need to discredit. Acting like there aren't any complains and concerns about lack of quality control and uncontrolled spread of mobile games on PC platform.

I must find great pleasure in playing shitty PC games, otherwise i wouldn't have spent this much time with listed "exclusive PC games". Must i point out that this is an incomplete representation (pre steam era, duds, mod availibitly etc.)?

at the beginning but it was only for playstation, what i think helped a lot to be psone so successful, like it happen with many other games, even if after the time it were released on other systems