I think there's an angle you're not seeing here. I'm sure you could provide reasons as to why Rey always seems to have the upper hand in whatever situation she finds herself but this doesn't change the fact that she always has an upper hand. No feat seems impossible to her.

This is a problem for storytelling: things like building tension and helping the viewer to suspend their disbelief are done by not only making a character believable but also making the antagonist threatening. Rey being good at so many things at some point becomes unbelievable.

I think everyone here would agree that they're good at some things and bad at other things. I'm good at math and science but I'm terrible at reading Shakespeare. That stuff is not modern-day English. Even people really good at one thing are not so good at another: Michael Jordan was a great basketball player but a mediocre baseball player.

Being able to fix things, speak droid, fight well, and even overcome Kylo's mind probe and turn it against him runs counter to building tension because at some point, I just expect Rey to always win. Rey being good at everything isn't gonna make me wonder if she'll be able to overcome the next obstacle, I'll just get used to expecting it.

That's boring: tension dies and suspension of disbelief is shattered. It's what happens when you turn on god mode in a game: fun at first but it gets boring quickly. Without risk, where's the fun? Where's the challenge? Would a game that was won by pressing a 'press to win' button be fun?

To add to all this, this latest Star Wars trilogy does not exist in a vacuum and neither does Rey's character: Luke Skywalker exists in this universe and he had to get his ass kicked before becoming the capable Luke Skywalker in episode 6. He got his ass handed to him by cantina thugs, tusken raiders, Darth Vader, and even the emperor rendered him helpless with lightning.

(Luke staring death in the face) 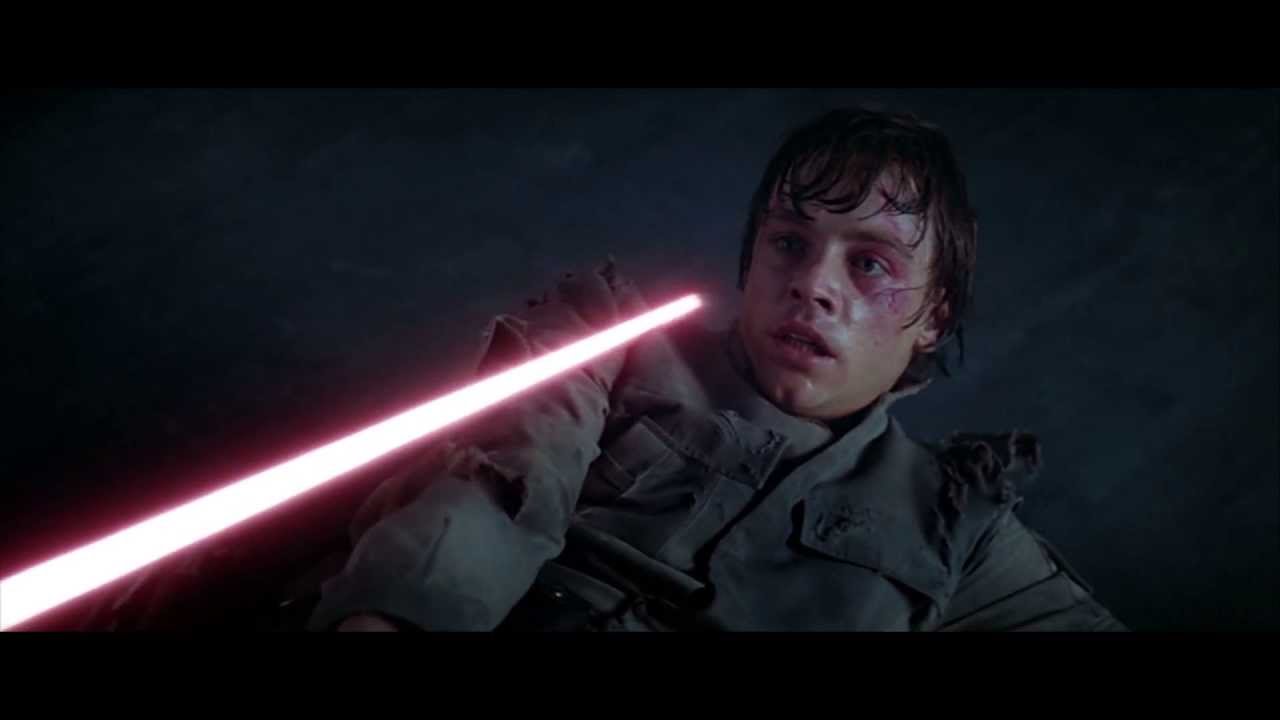 Fits part of the Mary Sue definition. People just quickly like her.

If you don't like the name "Mary Sue" then how about I just say her character sucks because she's overly capable?

I'd agree that the original trilogy is not perfect: ewoks need to go die in a fire for example and the stormtroopers are in serious need of aim training but there's enough good in there for an enjoyable watch.

The latest trilogy is far too imperfect for an enjoyable watch as it has me rolling my eyes far too often.

I try to enjoy Disney's SW offerings but I just can't. In TFA, Rey sucks as a character and the plot seems all too familiar. TLJ has stupid characters like purple hair who is in a dress rather than military uniform, Luke milking a giant space cow, silver stormtrooper is still shit, and a portion in Las Vegas that goes nowhere.

This new SW just isn't for me.

Of course she is. And people who desperately want to prove she isn't falls into two categories, either SJWs who have no argument, so just call the other side sexists, or those who exaggerate scenes or just plain make up stuff that weren't in the movies to show she isn't.

A key example is the fight with Kylo. A near Jedi who has had at least a decade of training, and on both sides, is easily beaten in battle and in using the Force by a character who received absolutely no training, nor know everything that you could do with the Force. What are the excuses? "Oh, but he's emotional, so that hurts his ability." Eerrrrrr, wrong. Nowhere in the film is this even hinted at. He is still very capable, even in the few scenes where he loses it. "Oh, but he got shot, which drastically hurt his abilities." Eerrrrrr, wrong, again. You go back and watch that scene, again, and I dare you to try to point out where it's affecting him. He's swinging his lightsaber perfectly fine, keeping up with Rey as she is jumping over rocks to avoid him. Nope, it's just at that point she becomes a near Jedi because the script needed her to. She even out mind reads him, not even knowing she can do that, and out Force pulls him, again, even though she doesn't know that she can do that with the Force.

Then, at the end of TLJ, without any actual training, can lift a ton of boulders without even breaking a sweat. Mary Sue to a tee.

BTW, those examples I gave, if you want to know how to do them competently, here goes.

First of all, Rey should not have got herself out of the restraints. You can have it where Kylo is having trouble seeing into her mind, but DON'T have her reverse the damn probe. Finn and Han should have been the ones who free her, and we see she is obviously exhausted from thwarting Kyle's probe. As for the Kylo fight, show him actually being affected by that blast to the gut. He's stumbling around, barely keeping up with Rey, while flailing his lightsaber wildly, with Rey still having some trouble blocking/parrying his blows. Maybe have her plead with him that she doesn't want to fight him in this state.

As for TLJ, Luke should have actually trained her. At the end, when she's outside the blocked path, she hears the Rebels frantically pleading for help. She concentrates extremely hard. The boulders begin to move slightly. Their cries for help echo in her head. She uses everything she has in her. She moves only half the boulders before she drops to her knees and then passes out, but it is enough that they can escape by crawling over the rest. Po and Finn quickly run to her limp body and carry her on board the MF.

She's a strong independant woman that don't need no man. Seriously though I'm seeing so many people all over the internet talking about this with Rey, I think she's a decent character, I mean I can see why people would have problems with her when it comes to the question of this thread, but I guess these thing don't necessarily bother me.

She opens the wrong door and lets the Rathtars out, almost getting everyone killed

She refuses the call, runs into the forest and loses/gets captured by Kylo

She “goes to the dark place” when reaching out to the force, which causes Luke to be reluctant to train her

She fails to convince Luke to join the cause

She fails to turn Kylo Ren which would have cost her life had Kylo not saved her.

What were the consecuences?

Her consequences at this time are emotional, not physical. Yes Anakin and Luke both lost a hand by the second movie. But Anakin didn't really lose much else from his actions, just went through a massive emotional roller coaster which led him to the Dark Side. In this trilogy, the 'chosen one' is on a emotional wrecking train as well. From her parents to her role or purpose to her deep emotional feelings for Han and now Kylo... as well as the distress Luke put her through due to his own f'ed up mental state. This will come to the forefront in the last movie. Like Anakin and Luke in the 3rd movie, she will be pressed to the emotional breaking point and have to make a choice. This choice will focus (my theory) on her real parentage, Kylo, dark/light, and her friends. The sad thing is, is if she had lost a hand to someone in this movie we wouldn't me making this claim. Instead we'd have another set of forum goers talking about repeat of previous movies just as we did with TFA. This movie actually breaks the mold and people still find something to complain about... as my rant above its all about individual's perceived notions of what they think SW should be vs the more rational issues with all of the movies.

The fact Rey faces no actual defeats againt Ren is why these movies box office and audience score is really starting to falter.

This is nowhere near as interesting as Luke and Vader.

How is this even an argument..

Those many failures are spread over two films and less than Luke gets wrong in the first film, in the second film of the original trilogy, luke gets cut up by the baddie (having been trained by two jedi masters) Rey cuts up Kylo known as the jedi killer (because he's killed many trained jedi and gets the better of Luke) and we are supposed to accept its because he's been shot, even though it seemingly affects him in no way, or because he's emotional, which lest we forget feeds the dark side....

Her force pull on the light Saber, compare it to Luke's on hoth at the start of ESB..

She uses a jedi mind trick on a stormtrooper with seemingly greater skill than Old Ben did. These are not the Droid you are looking for" VS "yeah, you know I'm the prisoner, there's no doubt on your mind, but you know, I havent had training, let me out walk off, oh yeah and drop your blaster on the way"

And for anyone saying this film has broken the mould... Jesus, it's ESB with hoth split between the beginning and end, all the same plot points for the main protagonist, and an intergalactic car chase, which is as exciting as it sounds, because there is nothing obscuring their view of each other....

The literally start the film fleeing an ice planet (the end of hoth) and end the film being besieged on a planet that clearly looks like hoth until we see the red footprints and some dude tastes it as says.. "salty"

Also the argument on her being able to fix spaceships because of her upbringing pulling ships apart seems a tad of a reach.. I mean, I have plenty of friends who could disassemble a computer, but there's a reason I assemble like theirs for them.. Completely different skillset