So, how many have you grabbed today? 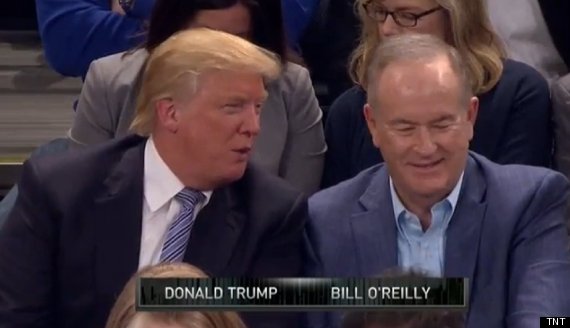 If it's darker and meant humorously, then it's usually clear that it's a joke. It's not clear in this case.

Though on that note, he also joked about dating his daughter several times. Saying that the one thing they have in common is "sex".
Ever met someone who "jokes" about something that's not funny over and over until it sounds like there's some truth to it? That's why those comments he made are also disturbing. But that's getting off track.

The point is, Trump is from that era of O'Riley and Ailes. The "Madmen" era where they could coerce women into having sex with them, and if they wouldn't, they'd get fired. I'm not surprised Trump has O'Riley's back in this, like Ailes did. Make America Great Again.

Trump said in a very old interview that "I think it's dangerous to put women to work. When I come home, I expect a hot meal ready."
I'm not so sure he has really outgrown this idea.

Too bad, really liked his show.

Well even if he was serious, he should be judged for his actions, not something he says in private. I just dont think he goes around grabbing women by the pussy. What I do think is that he thinks very highly of himself. Its not that he wants to do anything with his daughter. Its that it is HIS daughter, so she must be the sexiest thing ever created. He is extremely narcissistic.

This is going to hurt Fox News more than it will hurt Bill O'Reily. He has a huge audience that will no longer watch Fox News at a prime time and I'm sure O'Reily is just going to go digital with a radio show, podcasts and whatnot and he will get plenty of conservative advertisers to support him.

For those of you thinking this is okay because you hear worse on a daily basis... That means you have friends with some pretty awful humor and if they were ever let anywhere near a microphone with those jokes, they'd be in a similar situation to O'Reilly.

Woman find those jokes distasteful and hard to listen to... They don't like it.

This sort of crap isn't uncommon. Especially in the deep south states... The difference between Kansas and California is like night and day. In Topeka Kansas, it is legal to beat your wife.
http://gawker.com/5847619/enjoy-hitting-your-spouse-move-to-topeka

What the hell are you talking about? Joking about something dark is the same as commiting the crime? Get out of here!

No I'm not saying they're the same, where did I say that...  I said that sexism is very present in our society and parts of america treat it like it doesn't exist.. I used the link above to demonstrate that there are actual laws in place in some places that are undeniably sexist.

You said if they told those jokes into a microphone, they would be in the same situation as a guy who sexually harrassed his female coworkers and told them he would make their life a living hell if they ever told anyone...