I didn't know it would have DLC

Go to sleep at an inn. 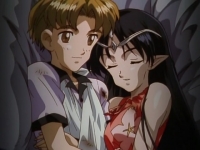 The reviewers are being generous with tri-ace. This game should be 40/100 max. Even Japanese gave it 2.5/5 on amazon.jp:

Dont waster your money as it will be 1/6 of its MSRP soon like the Asian market.

I am betting on the price to drop heavy.

will likely get it sometime next year though

I pre-ordered the Collectors Edition on SE's site, hopefully I'll be able to enjoy this.

My sentiments exactly. So whatever problems this game has, I doubt many of them will be the same as the problems I had with SO4.
Gonna check out some reviews later.

I think he means the tunnel simulator (until Grand Pulse, a.k.a. 30-40hrs into the game) with an awesome soundtrack, memorable sequences often for the wrong reasons, no towns to explore, and a chaotic battle system. ;p

Im combat your allies standing behind you off screen would cast spells that fly over your head past you and you often can't make out if that was a Firaga that flew past you to the left, or a Ruin that flew past you to the right, and whether or not any of them hit an enemy weakness, or how much damage they did, etc, all in a short moment while you're focused on your own actions at the exact same time. And the blocking sequence could look like this: L1 (Paradigm shift), Up, Up, Up + X (select Sentinel). Now that's an intuitive thing to do in a split second while Bahamut casts Megaflare on your party that's about to hit in two seconds... (In XIII-3 blocking was never further away than two inputs.)

And in spite of all that, that game was nowhere near as bad as SO4, and I didn't actually feel like I regretted playing it and that I had wasted part of my life, as I did with SO4. It's hard to imagine SO5 being worse than SO4 for me personally.

You have long since displayed a spiteful attitude towards most Western games and devs, favored Japanese games, devs, pubs and systems easily over anything Western, that type of attitude towards a different side of the world is a case of xenophobia. I've yet to find anyone else on this forum who displays the exact same attitude and behaviour as you towards the entire Western world.

If there are no Japanese reviews for the Japanese game then simply blame those people, not the West, don't even involve the West in something that has to do with Japan getting their reviews out and their shit together.

Listening to a few reviews alone isn't what you should be basing your purchase on entirely, I go by extensive (not shown just by trailers) gameplay footage, price points, all sorts of reviews, not just only the big sites, I go by certain youtube reviews as well since they tend to go in depth to places that big reviewers tend to skip. I basically do my own research before buying a game, big name reviews alone don't even begin to suffice, so those relying only on meta can do what they do but personal research and using more sources of input are better than one source.

Also some people here have decided to cancel their *pre-order*, that isn't to directly say they will never ever buy the game and even then this forum is but a very tiny fraction of people who would/wouldn't buy the game vs those outside this site around the world.

I dont even get past Step 5.  Never get to a screen for Download.

Just the thank you for putting in the code and I hit Continue.

Thanks for the list.  I also did the DLC stuff prior to playing the game, have stayed at inns since with no luck.

Ill do it again and throw up an update.

Oh, and Im kinda digging the game the more I play.  Battle System seems a bit more sluggish than Id typically like and the Environments rather ugly...and it doesnt seem to bother me at all.

Check your key items tab. You should see a bunch of key items that say when you sleep at inn you get em. If those are not there then you have an issue