Forums - General Discussion - FFXIII's Lightning gave an interview about working for Louis Vuitton.. yup i'm not making this up

‘I am proud to be chosen’: Final Fantasy character Lightning being welcomed into the Louis Vuitton ‘family’ It wasn't only the inclusion of Jayden Smith, the 17-year-old son of actor Will Smith in Louis Vuitton’s new ad campaign that has garnered headlines recently, but the casting of a virtual character too. Lightning, the heroic, pink-haired figure in cult game Final Fantasy was given a high-fashion makeover for her first modelling assignment, entering the Louis Vuitton galaxy and blurring the boundaries between reality and make-believe.

Vuitton creative director Nicolas Ghesquière rationalised the unusual decision by explaining that the collection that ‘she’ models was predominantly inspired by video games. “Lightning is the perfect avatar for a global, heroic woman and for a world where social networks and communications are now seamlessly woven into our life,” said the Frenchman, adding: “She is also the symbol of new pictorial processes. How can you create an image that goes beyond the classic principles of photography and design? Lightning heralds a new era of expression.”

Now Lightning is speaking out about crossing over worlds (stay with us here, there's a Q&A which follows below). Some die-hard Final Fantasy fans may be up in arms that video game publisher Square Enix has allowed its heroine to be modelling for a fashion house, but the character says she 'feels' nothing but pride. In an exclusive Q&A released to The Telegraph by Louis Vuitton, Lightning discusses her new role and her journey of self-discovery. Is it your first campaign? How do you feel to be part of the ‘fashion family’ along with Jennifer Connelly, Michelle Williams, Alicia Vikander?

They are in a completely different world. ­­­­­ As part of the family, but I have so much to learn to catch up to these radiant women who are light years away from where I stand.

I hope that one day, we can share the same stage, that different worlds can come together. But who knows? Maybe that’s ambitious, even for me.

Fortunately, I’m not one to give up. One of my strengths is “experience.” I’m no stranger to overcoming challenges and finishing what I’ve set out to do. I can face any kind of trial as long as I remember the following words:

“It’s not a question of can or can’t. Some things in life you just do.”

What do you think about Nicolas Ghesquière’s vision and his collections? Do you recognise yourself in his creations?

Though his style was new to me, the moment I laid eyes on his collection, it was as if I was hit by a bolt of lightning. I knew that with this, people could change. I could change.

It turns out I was right. His collection fills me with a sense of serenity and pride. All this time, I thought the only style that suited me was one that mirrored who I was: strong and tough. But I was wrong. He changed the way I see myself. Perhaps I’m finally learning who I truly am. What does it feel like to become a Louis Vuitton ambassador?

My clothes were nothing more than armor to stay alive; “dressing up” was a concept I’ve never had. Perhaps that makes me an unseemly choice as ambassador. But this experience has opened my eyes. Fashion isn’t something you’re taught or given, it comes from your own taste and your own choices. It displays the essence of who you are to the people around you.

It makes me feel excited, a feeling similar to when I venture to unknown lands. It is a thrill that I, who has faced my share of danger, have never experienced before. LV is a new adventure―a new fantasy―that I will enjoy from the bottom of my heart. What are your upcoming projects?

I’m currently winding down after a long journey. My days are peaceful; it’s what I’ve always dreamed of. I hope these days last a long time.

But I’m always looking to push myself, to better myself. Sometimes I get the urge to put my life on the line again and test my limits.

One day, not so far in the future, I will be out there again, in a world of strife. But I won’t be the same person I was before. I will return to my origins, like a Mobius strip, but it’ll be a new me, one who has evolved.

I look forward to the day we meet again.

this gave me a real insight into Lightning.. gonna replay all FF13's... and is she hinting a return soon?

"One day, not so far in the future, I will be out there again, in a world of strife. But I won’t be the same person I was before. I will return to my origins, like a Mobius strip, but it’ll be a new me, one who has evolved."

So she's gonna be in Final Fantasy VII Remake? And in an origin story?

If SE gives a free DLC of Lightning Louis Vuitton's costumes in XIII, I might have a reason to re-play the game. :)

I mean, the customes are fugly. I just want an excuse to replay it, goddamit.

She will also "return to her origins", so she was Cloud in drag confirmed?

You may be thinking this is going on behind the interview: 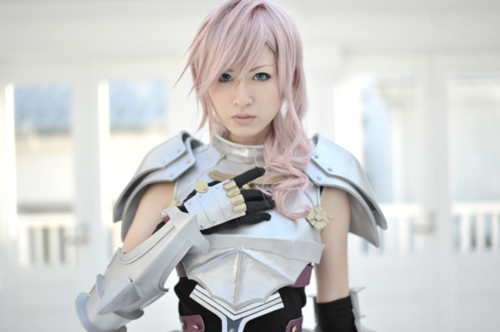 but instead this is what's happening:

awsome, can i ask lightning something as well?

Lightning, the heroic, pink-haired figure in cult game Final Fantasy was given a high-fashion makeover for her first modelling assignment, entering the Louis Vuitton galaxy and blurring the boundaries between reality and make-believe.

I always took "cult" in media to mean something that has a small yet rabid fan base.

Her head looks like it let go of her neck and spine and can move completely independently from her body. Creepy af.

I hope she appears in other projects and different industries like this.

This is fucking great.