Dead Or Alive creator Itagaki buts in the situation: 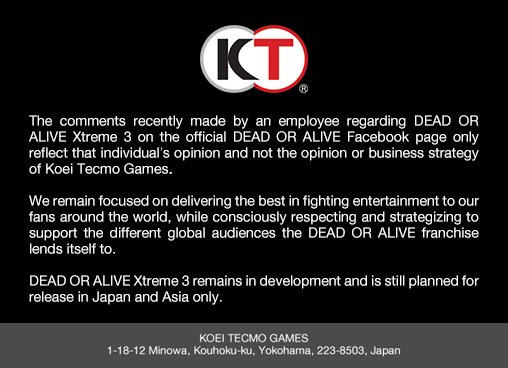 Why even release a statement if nothing changed?! Basically you're still saying the same thing your employee or whomever stated. If that wasn't the case, then the west would see a release! Hmph...

Between this and the tweet from their Europe branch it's clear that the initial comment from that community manager was just that one guy's opinion. Nobody really knows why a Western localization of DOAX3 isn't being planned right now. But I have a feeling this will change nothing in regards towards attitudes about those "dastardly SJWs coming to take away our games." Everybody just assumed the worst and will continue to assume the worst, because this is the internet and that's what people do on it. That's not to say overly-PC types don't carp and moan about these sorts of games, but it does seem kind of odd that K-T would just up and decide that only now will they capitulate to a handful of gaijin who would never buy the game to begin with. It seems more plausible that the decision to not localize DOAX3 was because of business concerns, not because they sought to appease so-called "SJWs."

I swear, this whole "debate" about gender issues in video games is an embarrassing fustercluck. It seems that only the most loud, obnoxious and boorish voices on both sides get heard, and I wish they all would just shut the hell up for at least a few days (note that I am not saying both sides are equally bad; I'm just sick of hearing the endless prattling from both sides).

The irony of the anti-SJW whining is that they are the only group I actually hear whining on every gaming site I visit. Always throwing out names like "Anita Sarkeesian" who I never heard off till these whiners started launching their tirades everywhere. Many of you do not realize that you're doing more for the so called "SJW" movement than they could ever do alone....geez. Last I heard from so called SJWs was the Dragon's Crown fiasco and that one released as is.

Bottom line, no serious company on earth would cancel a profitable venture because of "whining" save for an illegal venture. If the whiners win, it's because there was more to be made by listening to them, end of story.