So I watched Ishuzoku Reviewers. It feels like the first good ecchi anime in at least 3 years. I love how direct it is and how it treats sex as something completely normal, aka how it should be treated. The most interesting thing was that in the uncensored version you can see full puss in the OP, though I doubt we'll see anything like that outside the OP. They choose their angles wisely. The character designs are nice, the script is solid and animation is good. It's basically the dream for any monster girl fan.

I also watched the first Ep of Railgun and holy shit was that first episode exposition central. It's as if the director and writers looked at film making 101 and then did the exact opposite. Now I wonder if Railgun was always this terrible.

I have zero interest in Railgun. The writing in the second season wasn't just bad, it was really bad. Like, "I'm kind of pissed off that I wasted time on it" levels of bad. Just like Index, it's bits and pieces of good mixed in with a whole lot of pretentiousness. It was between watching Railgun and rewatching Milky Holmes for the 5th time, I'd choose Milky Holmes without blinking.

One of the biggest Winter seasons for me ever, theres so much good shows here. Outside of the 3 rollovers (Chihayafuru 3, MHA S4, FGO) and sequel (Haikyuu S4) the new shows have so far been great. My first past 10 show season in years.

The real stand out new shows for me are after episode 1.

And the shows that are dropped

Bofuri is still amazing. The animation is complete dogshit in parts but it's so wonderfully whimsy. Both MCs are already awesome, can't wait for the rest of the cast and the evolving story. I already regret that it's only 12 eps.

I used to watch Anime in Japanese with English subs back when I downloaded that stuff, like the evil pirate that I was.

Now I'm still evil but with Netflix I got used to the convenience and I'm too lazy to go back to downloads, ratios, seeds and all that nonsense.

It's only taken 6yrs since season 2 aired but Log Horizon season 3 is finally coming this Fall.

Time for my first update of the year, just in time for February.

Backstreet Girls: Gokudolls- A strange show, but after watching an episode I was on board. The animation quality is quite poor, but it somehow adds to the humor. Surprisingly the story does progress little by little with some plot, but it all boils down to random laughs. The boss was hilarious, and some of the operations comical. All in all a good filler show. OP was okay, but skippable. No ED for me.

Cells at Work- A show that will teach you a lot about the body. It is interesting but watching this show all marathon like I did, made some of the repeated information quite annoying. Although the titles of each episode would spoil what would happen, I thought it more interesting to ignore it and try to figure out just what is happening on my own until the reveal. The characters were fun to follow for awhile, but the ending was satisfying enough for me. No OP or ED.

Goblin Slayer- This one got a lot of attention for the first episode, but it was quite meh, but it appears the hook did its job quite well. Fantasy monsters do what fantasy monsters do, and they didn't show more brutal scenes. The fantasy setting and mechanics of the show reminded me a lot of DnD, which I thought was great. The actual story ended up being mindless goblin slaying, without showing much crude intellect from the enemy. The OP was okay, but not the ED. The OST during fights and stuff was oddly very good at times.

If I watch 3 shows per month, then I will watch 36 shows this year, so a much higher rate than last year and higher than the year before at least.

Finished the most important shows on my planned to watch.

Keep Your Hands Off Eizouken Episode 5 is just pure delight. I grinned from start to finish. So many small-yet-great moments.  When everyone was crying and sharing their secret heartbreaks ... I love all of them.  All three girls are awesome. 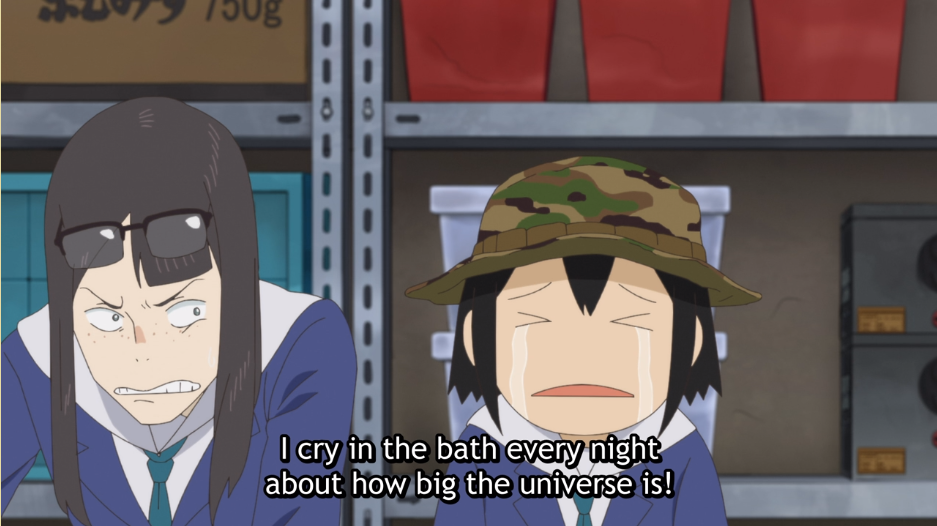