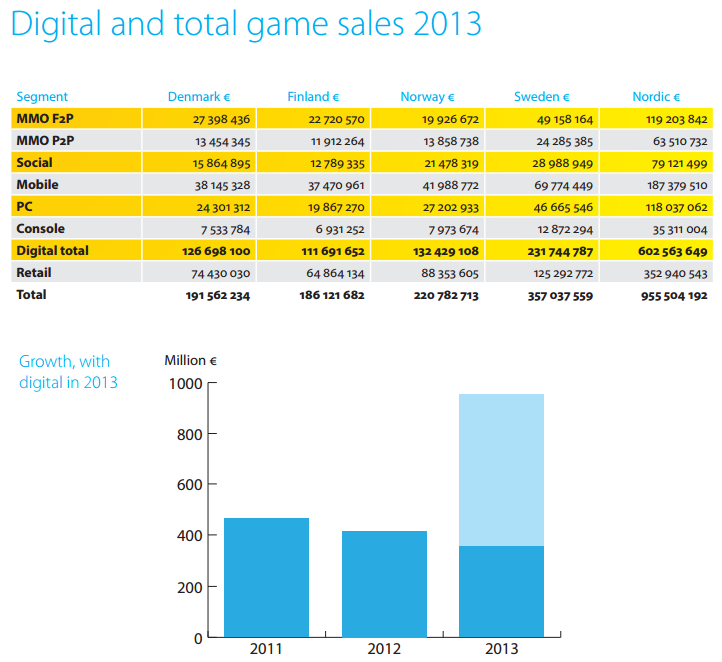 A small market that is shrinking? Not good, all the growth seems to be mobile and social, consoles are falling. I suppose it may improve a little when ONE releases too, so all 3 are out. 360 was reasonably popular there.

Digital seems to be quite big there

Its big everywhere now, it represents half of UK sales too.

Unfortunately it seems to be almost all mobile/social with of course PC.

Well even if you combine Nordics the population difference is rather huge (25 million vs 64 million). Even with that though per capita spending seems to be  bit larger in UK.

As for the data itself it seems that after DS and Wii finally die Nintendo becomes completely irrelevant again, aside from Sweden where X360 and PS3 seem to go neck and neck other Nordics are completely dominated by PS3 and handhelds are going extinct even faster than elsewhere.

Interesting information. I wonder how they compiled all of their digital info.

Lol at the social games :D But I know why. I sit in the back of my classroom and almost none does their work, most just plays candy crush. After the tetris battle fad got over many more have started doing their work though.

Still, console gaming is dying since more and more move to either social and mobile or computers. Not good.

well in Germany digital revenue was only 14% of the pie, digital games sold 39%.
In the Nordic countries is the revenue ~63%. Quite a difference.

Shrinking? The PS4 was sold out and is still sold out and most stores. They even increased the price because the demand was so big.