Forums - Gaming Discussion - Will the Xbox One Cloud Underdeliver like The Cell Processor?

Will the Xbox One Cloud Underdeliver like The Cell Processor?

I had to comment.  Just because a lot of people think something is garbage does not make them right.  It just meean that a lot of people could be wrong mostly do to lack of understanding of the technology.  Just from this thread and others I have read.  The majority of people that make a comment actually have no ideal of the technology and they associate dedicated servers as cloud compute.  Most people do not even know what cloud compute means and how its implemented.  Most people do not understand the software that allows for could compute and how distributed cloud processing works.  Lack of knowledge and ignorance does not help when forming a valid opinion about a piece of technology.

I would like to ask why do people think that graphics is the only thing game code has to do.  If you offload parts of the game code that do other stuff, why would that not release resources on your local machine to just concentrate on the immediate task at head and use those freed up resources to enhance the game not just the graphics.

I worked on such a system myself in the past long before it was called cloud computing. Yes the server can do it much more efficiently then running a separate game for each player, yet it still needs to keep a seperate data instance for every player running alongside. I mean if it were a simple case of everyone experiencing the exact same thing, thus minimizing data instance needs server side, you can more easily pre-compute all that and put it on the disc. If the player has a lot of influence on the world (destruction, foot prints, tire marks, displaced items, smoke grenades, etc) then the server load grows quickly.
Btw every system getting a dedicated server for free is nonsense, those are virtualized servers.
Anyway we gave up on that 'cloud' system at the time due to bandwidth and latency being the bottleneck. It is now just serving up data asynchronously to be used at the device's convenience. Bandwith limitation is still the biggest bottleneck today and will be for the rest of this generation.

Orleans is an impressive flexible standardized platform for dedicated servers. Bandwidth and latency limitations however restrict it's usefullness to enhance how games look. It can enhance the content, not help out with rendering.

The Xbox One is no longer an 'always online' piece of hardware. That means that games must be optimized for local offline use. Do you really think that there will be games that are better online and worse offline? That can't be. Each game must perform in the same manner as it does online or offline.Therefore, even if the MS cloud is really indeed powerful, it can't come into play because every game must work the same way offline. The only place that the MS cloud can really show off is with online multiplayer or online-only games like MMOs. Whenever there's a single player element, it's basically shut off.

@Bolded:  You are correct, this is the reason that MS built the Orleans platform to solve exactly what you just mentioned.  For a distributed cloud computer platform, you need a way to monitor, distribute and process pieces of code.  Its not a simple process and highly complex.  I have done something very similar but on a much smaller scale.  This is the reason why I keep telling people that its not so simple that Sony or Nnintendo can just do the same thing. The software and hardware takes years to develop.  One of the key things that Azure does that helps is its capability to spin up a server anywhere in the world to perform this type of work.  Resources can be added or removed in seconds which is why this is something that MS can do because of the money they have spent with the Azure platform.

@Second Bolded:  This is correct but then incorrect.  People do not know how Azure works.  Azure only spins up virtual servers.  The software that runs the Azure platform is very complex.  All resources within the Azure platform are controlled by software.  The reason for this setup is that if any of the actual physical hardware goes down, the customer will see absolutly no downtime.  You can actually pull the plug on a rack of servers where a customer software is running and they probably would barely see a blip.  Depending on your service agreement, you can an instance of your software running on multiple servers and datacenters around the world.  This is the reason MS can state 100% uptime for hosting companies software on Azure.

EDIT:  I forgot to mention that when people say that "its only a virtual server", you have to realize that Azure uses the same tech as the hypervisor within the X1.  The virtual servers are not the same as you running virtual PC or Citrix on your desktop.  The hypervisor are very thin allowing the virtual server to gainbare metal access to local resources on par as if you were running it directly on the server.  People should read up on hypervisors its pretty interesting tech.  I believe VMWare still have the best but MS Hyper V has come a long was and is a solid competitor.

For that cloud system you are talking about, you could do that using Azure.  The key issues you talk about would be corrected by Azure to instantly spin up a server at a datacenter local to your location.

I agree that Orleans is not setup for graphics work so it would not be used to make a game look better.  The way that the game would look better is if the hardware resources are freed up from other task so that it can concentrate on the immediate things the user is doing.  Think of how ingame non interactive movies look so much better than the actually gameplay.  All the resources are set to render the assets without having to deal with other aspects of a game that is processed behind the scenes.

For games that are not online only, then it will depend on how the developer create the game.  The cloud could be used as an extension of the experiece not a requirement. Probably would not be any different than PC developers adding in functionality to a game that only use a specific graphics card capability like the Hair simultion in the last Tomb Raider. 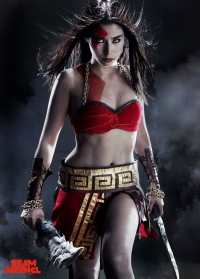 It all comes down to the internet infrastructure in the countries that these "cloud" based games are played in.
IMO cloud computing for games will have little impact and also causes concern for those people who bought the games but now Micro has moved on from supporting those tittles. Games no longer work or what?

The automatic load balancing is impressive, but that doesn't take away that there is not 1 real server available per xbox one. The real test comes when a few million players fire up their pre-downloaded game at launch time. Ofcourse the bigger the network, the greater the total resources to absord peak demand. Other apps may be a bit less responsive, but you're right that the usual can't get a multiplayer game going on launch day should be far less of a problem.

At bolded, it's not a simple case of freeing up CPU resources will help GPU rendering. It's true that the CPU can help out the GPU but it's difficult to make that work well, especially when using an unreliable resource. See how long it took for the Cell to be used efficiently to help out the GPU, and that was a reliable, always available resource, not one that might have to be given back for other tasks at a moments notice. Plus it's far from a 1:1 advantage when enlisting the cpu for gpu tasks. You'll get better results optimizing local code between the 6 available cpus instead of enlisting the cloud.

For non interactive movies, that has very little to do with the game code not having to process the user interaction. The optimizations come from the known camera path which allows a lot of things to be precalculated, together with precisely balancing what is in view. And still many games actually suffer the most frame rate problems and texture pop in during cut scenes when trying to make them look better.

Anyway the bandwidth limitation is the same for CPU tasks, what can you do that really helps out, fits within 1.5 mbps, and is not latency dependent. Crowd AI might work. All the NPC's that you're not directly interacting with can be controlled by the cloud. The cloud can update their paths and actions a few frames in advance while the local machine briefly takes over the AI of any NPC that comes into contact with the player. It would be a nightmare to program it well, use a lot of resources on the server, and look pretty bad during internet hickups.. For example all characters suddenly continuing in straight lines, freezing or disappearing. Plus the local machine still has to render all the extra characters, actually creating more work. See MAG, dedicated servers for 256 players, basically the equivalent of doing all the AI in the cloud. Doesn't mean the game can look better.

Better to be a fool and right, than to be an expert who's delusional.

Microsoft have said they will provision 3X the compute in the cloud for every Xbox One they make.  That's quite a lot of servers when you think the XB1 is expected to sell over 10 million a year, but they have got statistics on what % of people play at the same time and they don't have to provision for 100%.

So let's say fine, they have 3X the compute power in the cloud, and by this I mean 3X the CPU compute only, because I haven't heard and don't expect them to have 3X the GPU compute as well.  So if we measure in FLOPS it's probably more like a only 25% extra via the Cloud than local, which is still less FLOPS than PS4 has available locally.

Anyway that's just statistics and lies.  Fine, let's say that extra CPU time is available, so it's like having tripple the CPU power of PS4 at your disposal - but it's not the same tomatoes.  The problem is you have on average 8mbits download, 0.5mbits upload, so you can only download 1MB/s OR upload 0.06MB/s to these servers, and they should work for the lowest common denominator.  The XB1 has between 65,000 ~ 1,040,000 times more bandwidth locally, and the PS4 has almost 3 times more than that.  How is Micosoft going to put their cloud CPU power to use to make the graphics look better when very little can fit through this pipe?

There are going to be some uses, but spotty bandwidth, latency, and the need to support running offline will limit this severely compared to having extra compute power locally.

I dont get how microsft has convinced so many that the cloud is the next killer app. People sure didnt care when onlive did it. Also the idea of better graphics in general with the cloud is just not feasible. Multiplatform games will look the same as on other platforms, but just as with online and the sony playstation now service it will loose fidelity because of stream. If anything you will get the inferiour product true this, but with no download sizes and such..