Forums - Gaming Discussion - Ratchet And Clank: Into The Nexus The rumors are true: Insomniac Games is developing a new Ratchet & Clank game. It’s called Into the Nexus, and it will appear exclusively on PlayStation 3 later this fall.

I was lucky enough to get an extended look at the duo's return -- in pre-alpha form -- and was left quite impressed with what I saw. In short, Into the Nexus gets the series back to its roots, a so-called “traditional” Ratchet & Clank game the likes of which PlayStation gamers haven’t seen since 2009's A Crack In Time.

Check out our video preview below, and then keep on reading to learn more about what to expect when Into the Nexus launches later in 2013.

Into the Nexus begins with Ratchet and Clank transporting twin villains Vendra and Neftin Prog to a location known as the Vartax Detention Center. This voyage brings our favorite lombax-and-robot duo to haunted space, however, and while in the process of bringing his foes to lock-up, they escape Ratchet’s grasp. This leaves Ratchet and Clank alone and stranded in the scariest sector of space they’ve ever visited.

Long-time Insomniac employee and the visionary behind the Ratchet & Clank series, Brian Allgeier, noted that “the time was right to come back to the core series” with Into the Nexus after he'd spent time on Fuse. All 4 One and Full Frontal Assault were enjoyed by some and criticized by others, but it can’t be disputed that neither was a traditional, true-to-form Ratchet & Clank game. Allgeier said that doing a “family” and “competitive” game, respectively, allowed his team to finally “do something different,” but Into the Nexus finally allows them to go back in an old-school direction. 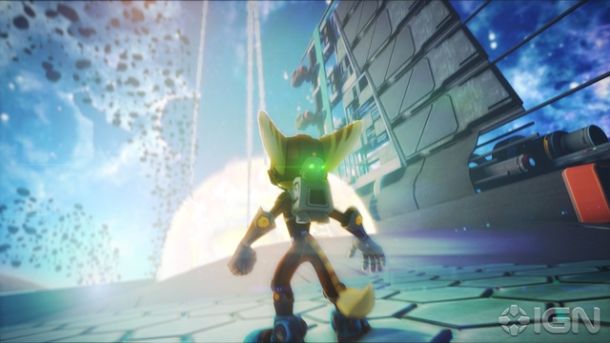 As such, Allgeier wanted to “make Ratchet feel like Ratchet again.” To accomplish this goal, he and his team made a prototype stage -- a “jungle gym,” as he described it -- to get Ratchet’s quintessential feel just right. They then segued what they learned (or re-learned) into their new project, which isn’t only designed to give longtime Ratchet fans what they crave, but to explore the “darkness of space.” While Into the Nexus is very humorous, as all Ratchet games are, Allgeier thought it would be “fun to take [the series] in a spookier direction” with its newest entry.

Following Vendra and Neftin Prog’s escape, Ratchet & Clank arrive at a planet called Yerek. Yerek is your typical Ratchet & Clank gas giant -- a temperate locale inhabited by bumbling, heavily-armed enemies -- and it’s here that I got my very first glimpse of Ratchet’s new, incredibly wacky arsenal. Sure, Ratchet has some of his typical weapons -- his sidearm called the Omniblaster and his signature melee weapon, for instance -- but there are a bunch of new tools at his disposal that are worth noting.

One such weapon is called the Nightmare Box, which is really more of a distraction than an actual weapon. When deployed, it scares enemies, forcing them to either flee or to attack the box, giving Ratchet an angle to strike his foes. Another weapon, the Repulsor, will leave bad guys suspended in midair when deployed, again giving Ratchet the time he needs to attack without being damaged by the opposition.

Into the Nexus also contains two types of grenades: the Vortex Grenade and the Fusion Grenade. The Vortex Grenade creates black holes that raise nearby foes into the air and force them to helplessly revolve around the black hole while Ratchet picks ‘em off from afar (it‘s also useful to coerce armored enemies from stationary, defensive positions like gun turrets). The Fusion Grenade is a little more straight-forward: it’s an arc-thrown explosive that does major area-of-effect damage. 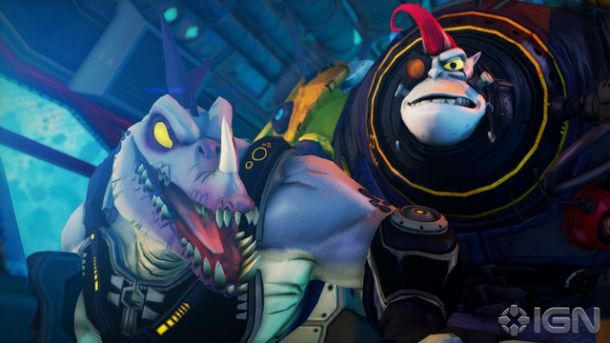 The strangest -- and funniest -- weapon of them all, however, is the Winterizer. When Ratchet employs the aptly-named gun, all enemies it hits will turn into snowmen. Better yet, the weapon plays Jingle Bells while it’s working its magic. It’s an amazingly fitting, totally insane Ratchet weapon, and from the looks of it, it appears extremely useful during the heat (heh) of battle.

Ratchet also has a non-offensive device at his disposal, an extremely useful gadget called the Grav Tether. With it, Ratchet can attach portals strewn about the environment, creating beams that will transport him seamlessly from one portal to another. What’s cool about the Grav Tether is that the puzzles that demand its use become more complex as time goes on. It won’t be long before you’re connecting several portals together at once, all while under a strict time limit, in order to cross wide chasms and other dangerous obstacles. 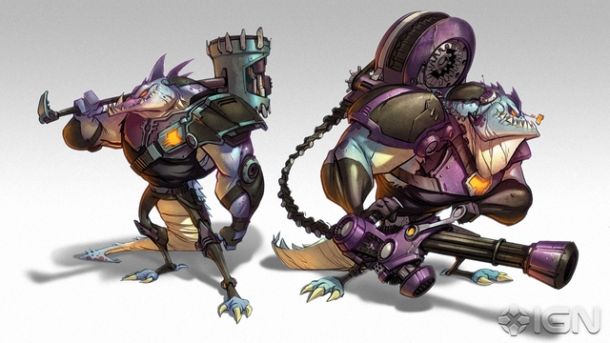 Clank also has an all-new function in addition to some of his returning moves (such as giving Ratchet the ability to long jump, high jump, and glide). Into the Nexus revolves heavily around the idea of what are, in essence, alternate dimensions, and when Clank is deployed in one of these areas, he gets to go to work. Players will control him directly in puzzle-heavy 2D platforming sections somewhat reminiscent of the lesser-known downloadable game Pid. Successfully completing these areas -- called Netherverses --  open up new locations for he and Ratchet to explore.

Apart from a ton of new gadgets and weapons -- and some new tricks and skills -- a lot of familiar staples of the series have returned. The franchise’s famous Skill Points are back, of course, as are hidden Gold Bolts. Regular bolts that are collected can be spent as currency to acquire new goods, and every weapon can be upgraded through experience earned by using that weapon in battle. Familiar characters will also return, including Captain Qwark, Cronk, Zephyr, and Talwyn. Even the Thugs-4-Less mercenaries from Going Commando will be back. This game is, after all, an epilogue to the Future branch of the Ratchet & Clank franchise. 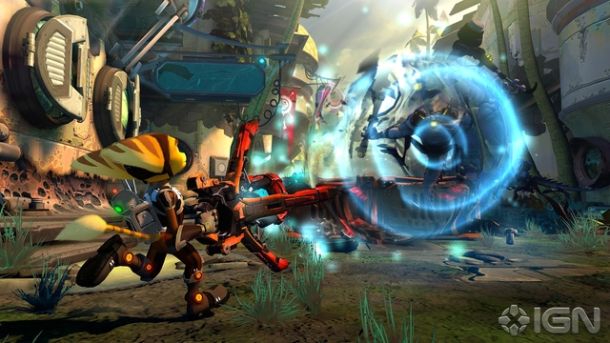 And as for a Vita iteration? It’s entirely possible, but it’s still up in the air. The Vita version of Ratchet & Clank: Full Frontal Assault met a whole lot of trouble during development and came to the market much later than it was supposed to. As such, Insomniac is cautious this time around. “Everyone would love for it to come to Vita,” Insomniac’s James Stevenson told me, “but it has to be up to the series’ standards” before the company makes any definitive statement.

In the meantime, rest assured Ratchet & Clank: Into the Nexus will be available for PlayStation 3 this fall both digitally and on disc -- and for $29.99 to boot.

A ton of screenshots from the video: http://minus.com/mlhTslXGGIYfR

meh, give this guy a rest, use Jak more for goodness sake.

I hope this isn't coming to PS3

Why? RAC is a great series, they just need to have more of what made it great and less of a reliance on guns. Hopefully it isnt a spin-off

At least they're back to a proper format instead of mediocre multiplayer games...

PS3 getting good games late of this gen.... good.