Taken a few pics during my exploration.

Been looking for somewhere to post this for a while: 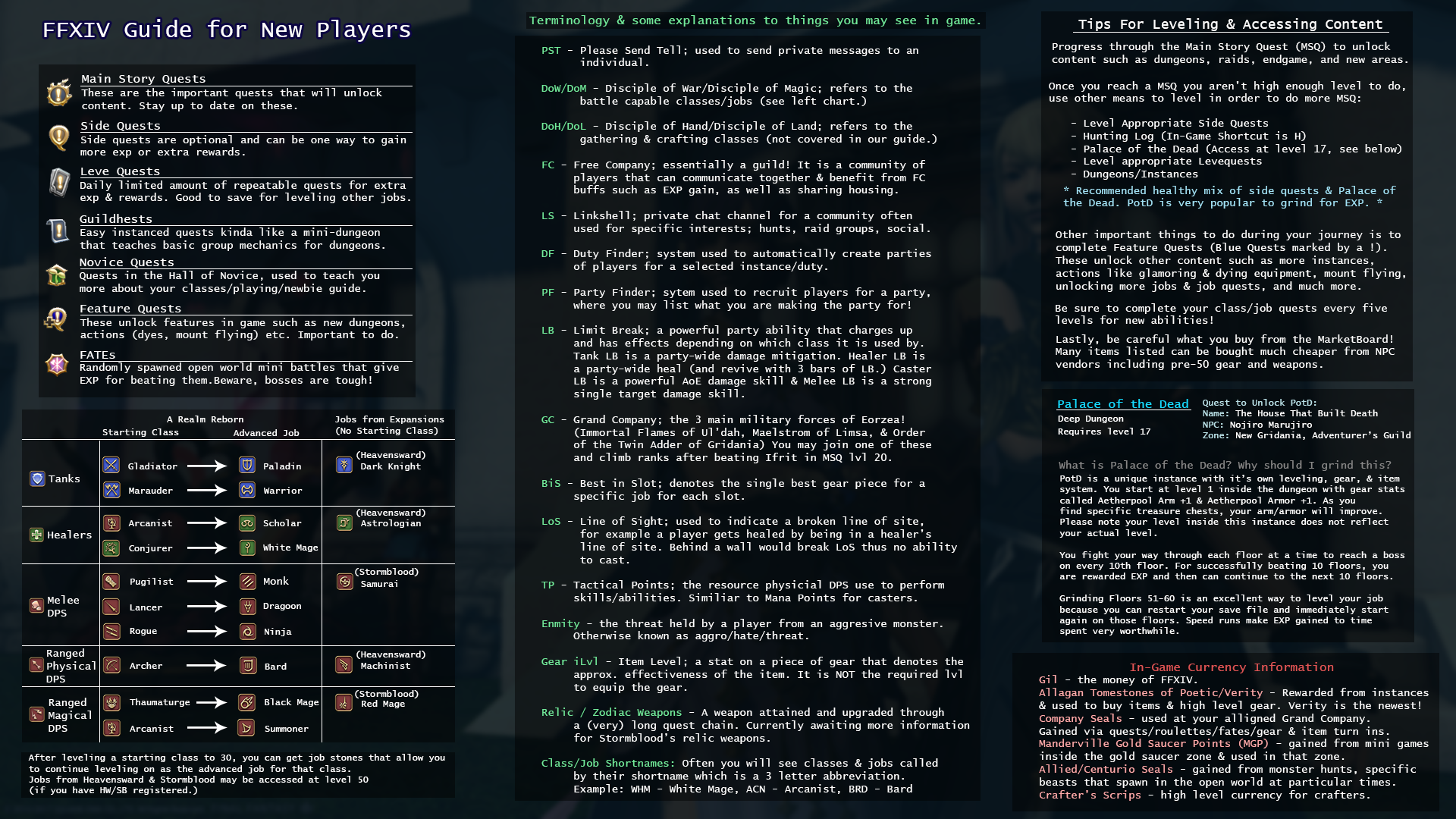 I think this is the first FFVII boss I've encountered in FFXIV.

Fascinating documentary (part 1 of 3!) that covers the fall and rise of Final Fantasy XIV.

With the new patch 4.01, Look at who I get to fight from the Omega raid.

Hey guys, I did my free trial ages ago and never played again so deleted my account long before they did the up til level 35 non-time limit stuff (and as I'm tight and not willing to pay to play this game).

Yet, I have a gift for someone. O2 (mobile network in the UK) has got a free code for some in game goodies. I'm not going to use mine obviously so if you want it (and it works on your servers, might be EU locked) just PM me and I'll send you the code. Let me know if it doesn't work. It also mentions registering so dunno if it'll work but worth a shot.

EDIT: Oh and it expires ina  couple of day so if no one has messaged me beforehand, I'll plonk it here and it's first come first serve if it works.

That's very kind of you. I already have those pieces, but i can give them to a friend if you dont have any takers.

No takers so it's yours. Sent you a message. Let me know if you/your mate has any issues with it. Not that I can do much to help as the code I'm sending you is just what's give to me. :P

Dang 1 hour queues preventing me from grinding out my gear!

• Main Scenario Quests – The Legend Returns – (Stormblood spoilers) "The liberation of Ala Mhigo signals the end of an era of tyranny. Here, on the cusp of a new age of freedom, her people must decide how they will greet their future...and reconcile with their past. What path lies ahead for Lyse and her efforts to rebuild the nation? What choices plague Fordola from within her prison cell? And to where will Raubahn return, now that the dream for his homeland has at last become a reality?"

• Alliance Raid – Return to Ivalice – "This morning, residents of Kugane woke to find above their city an airship unlike any ever seen. Yet while of Garlean design, the vessel distinctly lacked the bleak outfitting common in the Empire’s warmachina. No, this was the Prima Vista, private stage for the Majestic Imperial Theater Company-a troupe having won acclaim across Garlemald for their timeless work, “The Zodiac Brave Story.” Which begets the question...why are they here? The answer to that question and more lies in the selfsame legend of which they sing. The legend of Ivalice."

Guest Creator: Keita Amemiya (Return to Ivalice – boss creature design)
"Movie director, illustrator, character designer, and head of the CROWD design studio. Born in 1959 and raised in Chiba prefecture, Japan. Creator of dozens of titles across a variety of media, including Zeram, Moon Over Tao, Tekkouki Mikazuki, Tweeny Witches, and the GARO series."

• Dungeon – The Drowned City of Skalla – "Long ago, in the dawn of the Fifth Astral Era, the modest nation of Skalla was founded in the land of Gyr Abania. Over the span of several centuries, its people constructed a grand city of stone at the bottom of a steep-walled ravine, but even this natural defense could not protect Skalla from destruction during a terrible age of war. When the great flood of the Sixth Umbral Calamity later swept across the realm, the hollow ruins of the city were lost to sight, its remnants submerged beneath a raging sea. Haunting the depths of what is now Loch Seld, Skalla's silent walls lure adventurers into the salt-laden waters with the promise of mysteries unsolved and treasures unclaimed."

• Housing – Shirogane – "At long last, plots in picturesque Shirogane will go on sale. Set to the backdrop of the exotic Far East, the area offers a lifestyle experience like no other. Won't you carve yourself a slice of Hingan paradise? Love your estate hall, but yearn for a change of scenery? Yearn no more, for 4.1 will introduce the relocation function, which allows you to move your individually or free company-owned building to a new plot. Storage will be added to all forms of housing, allowing residents to stow their furnishings. Whether you wish to declutter or relocate, it will doubtless prove to be a boon."

• Extreme Trial – The Minstrel's Ballad: Shinryu's Domain – (Stormblood spoilers) "A god born of sorrow and despair. A man who lives only for death. As one they fought the Warrior of Light, and as one they fell. No words could do this titanic encounter justice...unless they come from the wandering minstrel, to whom no event is beyond improvement. As his nimble fingers pluck out the chords, his rich voice carries you to a place above the world, one that is at once familiar and foreign: Shinryu's domain."

• Ultimate Trial – The Unending Coil of Bahamut – (Patch 4.11) A new ultimate trial meant for those who want to push themselves to the limit. The difficulty will be more intense than the current Savage mode difficulty raid.

• PvP Mode – Rival Wings – (Patch 4.15) "On the forgotten fringes of the Dravanian Hinterlands, there lie the remnants of a Sharlayan testing site known as Astragalos. With their boundless ingenuity, the goblins of Idyllshire have transformed the place into an expansive training ground. Here, brave adventurers can take control of mighty machines in large-scale war games reminiscent of battles against the Garlean Empire. A furious struggle for territorial supremacy awaits!"

• Side Story – Still Further Hildibrand Adventures – "How depressingly dreary and plain existence is, in those brief interludes between the appearances of the larger-than-life inspector extraordinaire. Once more into the sky did he fly, and so once more did Nashu Mhakaracca set forth in search of her mentor-this time in the Far East. But hark, who lurks in yonder shadow, smelling faintly of cheese?"

• Beast Tribe Quests – Kojin of the Blue – "Though divided into two factions, the Red and the Blue, all Kojin have labored since time immemorial to gather treasures they believe serve as vessels for the divine. The Red Kojin achieve this goal through violence, once serving as mercenaries for the Garlean Empire. With imperials now gone, however, they have chosen to take control of the treasure vault of the Kojin knowing full well their Blue brethren will not raise arms against them. Instead, the Blue Kojin now seek to create their own treasure vault. What hardships will they encounter in their endeavor to honor the divine?"

• Additional Features – Custom Deliveries – "Everyone's favorite officer is looking for a few good adventurers to help her raise money for a good cause. Through regular contributions, Disciples of the Hand and Land will be able to strengthen their ties with M'naago and experience the story of the Resistance Widows and Orphans Fund."

• The Lost Canals of Uznair Update – New maps will lead you even deeper into the Canals and will offer more chances for loot. New, rare enemies will be added as well.

• Perform – (Patch 4.15) Bards will be able to "Perform" with a harp and map notes to hotbars. More instruments will be added later (flute, etc.)