For Health issues, he has cancer :( 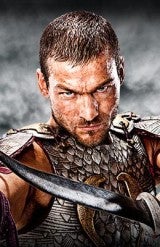 A very unfortunate story to report here, as news comes in thatSpartacus: Blood and Sand star Andy Whitfield is dropping out of Season 2 of the series, due to the recurrence of cancer. Deadline is reporting the news, as Whitfield and Starz have put out a joint statement about the situation.

Whitfield was diagnosed with treatable Stage 1 non-Hodgkin lymphoma earlier this year. After his initial treatment, he was in remission and cleared to return to work on Spartacus. In the interim, Starz had delayed production on Season 2 and ordered a prequel series, Spartacus: Gods of the Arena (starring John Hannah and Lucy Lawless), which is currently filming for a January debut.

In the statement released by Whitfield and Starz, they note his doctors have advised he "immediately resume aggressive treatment for a recurrence of cancer."

Said Whitfield, "It's with a deep sense of disappointment that I must step aside from such an exceptional project as Spartacus and all the wonderful people involved. It seems that it is time for myself and my family to embark on another extraordinary journey. Thank you sincerely for the support so far."

"Our hearts and prayers are with Andy and his family during this difficult time," said Starz President and CEO Chris Albrecht. "Andy is not only an incredible actor whose portrayal of Spartacus made an indelible impression on Starz audiences, he is also an amazing human being whose courage, strength, and grace in the face of adversity have inspired all of us."

Starz stresses they have not yet made a decision about how to proceed next, as no doubt the speculation will begin over whether they will recast, delay the series indefinitely or end it all together. "Right now, we just want to extend our concern and support to Andy and his family," said Carmi Zlotnik, Managing Director, Starz Media. "We will address our programming plans at some later date."

Sad news.  I hope they can find a suitable replacement.  I love the show.  I hope he can beat the cancer.

Dang it! I thought he was excellent cast in that role. It was my favourite series of the year.

Hopefully he gets better, cancer is a terrible affliction.

I remember right after he was cleared he said he felt 100% and was ready to go on with the show. This is terrible. I liked the cast they had for that show for almost every role and its going to be weird seeing him replaced. I wish him the best of luck.

Man this is bad news, I was so happy when he got the all clear, I hope they do the same again this time. As for the series, I cant imagine watching it if Spartacus is not played by Andy, so I hope they just delay the series again and just wait for Andy to get better again I wouldn't want them to find a different actor.

enraged:  FUCK YOU CANCER!!!! why do you keep trying to kill all these good actors!!!!

Never heard of this show.

What show is that? Never heard of it.

This is pretty much my favorite series now, wow this seriously sucks. I hope he gets better :(

I hope he gets better soon. I thought he was getting better...