A day like today, 10 years ago, PlayStation 2 was launched in Japan.

Its development was announced in March 1999 and it was released a year later in Japan. Its primary competitors were Sega's Dreamcast, Microsoft's Xbox, and the Nintendo GameCube.

The PS2 is the best-selling console to date, having reached over 140 million units sold as of September 30, 2009. Several new games are scheduled to be released in 2010, thus continuing the sixth generation. A decade since the best console ever (in terms of quality games) launched !

so apparently sony will have a 13 year plan for ps2 :P

And has been outsold for the last 5 years lol. I remember that chart last year, PS2 had 2% of USA software sales. That was year 9. So much for Sony's ten year ps2 lol.

PS3 will be in even worse position after ten years since it had not PS2's initial popularity, not even 10%.

well my Ps2 is still here alive and kicking... the opposite of my Ps3 that is dead :(
congrats PS2...

I was always more of a Gamecube fan...

Happy Birthday PS2. You did have the best MGS and second best Silent Hill game ever~ 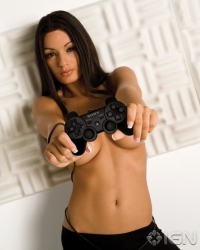 May you last another decade! With the games I still didn't play, my PS2 will probably do exactly that!