Epic Games has recently had or having a Mega Sale going on with there Store Front but is failing to capitalise on the results due to a half baked service (No Shopping Cart) and offering deals that only upsets the developers which pushes them to raise there game prices to make up the EGS Discount since Epic has done all this without consent from the developers.

Also due to not having a proper Shopping Cart, gamers have to buy each game one at a time which can become annoying on big sales due to missing what would be a key feature when it comes to digital stores. Rumours also have it that Epic were banning gamers because they thought they were fraudulent as they were buying too many games on the store to quickly.

Why is it so hard to add a shopping cart?

I think the developer's probably worried a bit too much, but I get where they are coming from.

Hard to believe Epic has yet to support their platform with basic features like a shopping cart....

This thing sounds a lot cooler in the email they sent me. 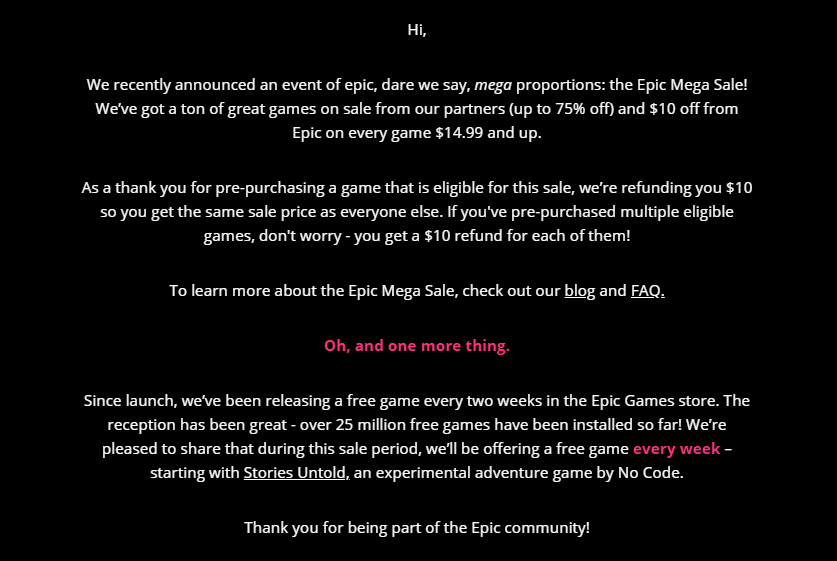 I guess even the pro consumer things they're doing are somehow evil.

You have a source for all that? Unless you're saying Jim Sterling is your source, which would be kind of crappy

Well he links (jim sterling) to some devs that want to delist their game or are upset.

Correct thread title: Epic Games is upsetting people who don't want to buy anything in the Epic Store but love to complain

The asshole part is reducing game prices even if the devs don't want it. Maybe they still get the same per sold game but it's devaluing the games for the time after the sale if people in the future know how cheap it already was once.

Don't reduce the game prices without asking the devs... this is not a Gamestop which needs new space on the shelves. The devs should be responsible for their game price.

But we all know what the Epic Store is all about. It's not about being nice to devs with giving them a bigger share.

It's all about growing as fast as possible and maybe overtake Steam. Stuff like better safety measurements for users or even a damn shopping cart have to wait.

Developers taking their game off the market during sales week is nothing to complain about.

Yeah, a few developers do that, the rest of the developers seem to be okay with getting the full price for their games within that sale while their customers get a good deal.

But these developers aren't the customers, so again: wrong thread title.