This topic is prefaced by a simple question? What are the qualities of intelligence and do we have the standing to define intelligent life?

While is is exorbitantly mathematically improbable for Earth to be the only harbor of life in the Universe whose size is far beyond our ability to comprehend, there has as of yet been no conclusive evidence of extraterrestrial life in the universe.   And to be sure scientists have only been able to look for what they refer to as 'intelligent' life through methods like radio waves.  The reason for this comes down to the fact that we aren't actually looking for life but rather life like humanity.  While the idea of life out in the universe will automatically change if we find life on Europa, it is safe to assume that life even without evidence that there is indeed life of some sort out there.  The reason for making the assumption has to do with the fact that there are believed to be something like 10^21 solar systems in the universe and our modest start has 8 planets on its own and 193 moons.  So for life to only be on Earth would be a 1 in billions upon billions of billions (some incredibly large number that no one here can pronounce).

Now getting back to the topic question, knowing that the likelihood of life out there being at effectively 100% how do we determine intelligence?  Being as though there is so much that we don't know, is it okay to assume that no one has contacted us because there is no nearby intelligence?  Do you consider humanity intelligent?

What if their was a planet (and of course there is) with life exactly like Earth without humans?  Should we be concerned with looking for life without creatures like us on it?

I would think that any creature which can express a concept of intelligence can judge it. Maybe not correctly, but who else would be qualified to judge it

The Fermi Paradox is still not solved though. It may be that we are indeed alone. And i don't think there would be a point to look if no real intelligent life would indeed exist.

We are intelligent only such as our frame of reference allows us to compare to.

400 billion stars in the Milky Way galaxy. 2 trillion galaxies in the observable universe. The full universe is infinity bigger. The sheer numbers basically guarantee it must exist or at least existed at some time (the universe is nearly 14 billion years old).

This is all we have really "looked" at:  That tiny dot is the extent of our radio broadcasts.  And this is just our galaxy. 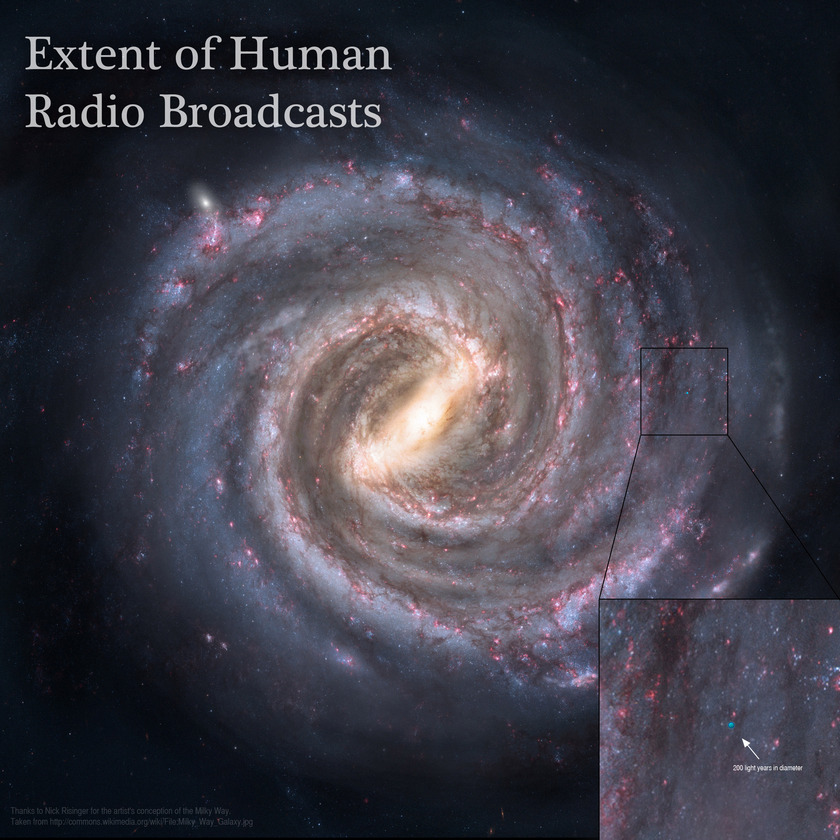 And the Fermi Paradox is bunk. I can't believe it gained any form of notoriety at all. The counters against it are many.

The universe is expanding faster and faster, so if some galaxy is believed to contain a life friendly planet we will never know whether there is life there since it is just getting more and more distant from us as time passes. It is a pointless search.

Let's look at Earth itself. Humans and ants specifically. How much time has our species overall spent getting to know ants, vs how many of us couldn't care less and just pass by constantly, if not accidentally and unknowingly stomping on a bunch of them and their homes?

Now imagine the universe is Earth and humans are the ants.

That said, I do believe there to be a fairly good chance that there is other life too. It's pretty much either that or our own existence is practically a miracle, and the former does seem more likely, although this is no simple matter either (ours might just be the googol'th universe and the first one to have any life in it at all, although I doubt even that makes any sense in the end).

There's plenty time left before expansion is faster than the speed of light. First Andromeda will pass through our galaxy in about 3.75 billion years. Will we still be around to see it...

If we survive we'll eventually colonize the entire universe anyway. It's just a matter of time.

Do dolphins count as intelligent life? Perhaps we don't even have to leave the planet to find it.

The definition of intelligence is rather vague:
The ability to acquire and apply knowledge and skills.

Actually this is pretty interesting
https://news.nationalgeographic.com/2016/02/160221-plant-science-botany-evolution-mabey-ngbooktalk/