When will you be getting the 3DS version of Super Smash Bros?

Incredibly bitter about the lack of Ice Climbers.

Otherwise, an excellent roster. I'll try not to let my serious disappointment hinder my enjoyment of the other characters. Playing Peach gave me a natural aversion to any smash character that even holds a sword...

I need a replacement for Princess Marth though so..

Haha XD If you look closely it's a pair of running/jogging noses.

Heh.. Those are the running noses from the WarioWare games! 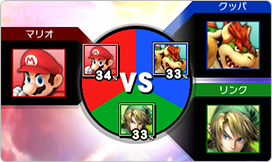 "It looks like retail version of Super Smash Bros. for 3DS will require a day-1 patch adding an additional feature to the game. The patch adds a new mode to online play called Conquest mode, which occasionally will trigger during a game and adds additional weight to the result of said match. Winning will add points to a tally that certain characters, and at the end of a certain period those points will be tallied and players associated with the winning character receive a prize."

Turnips are your best friend against sword wielders.

"This is the World Status you can see in Spectator mode. The game isn't released yet so the map looks pretty plain now, but I wonder what it'll look like once it's out? Also, this is where you can see all sorts of stats being tallied up. In Group play and Spectator mode, you can see characters you haven't unlocked yet, so watch out if you don't want to be spoiled."

"Even if you don't want to be spoiled, it might be wise to select the Online option at least once before you start the game. Your Global Smash Power won't appear until the first time you connect to the internet. Not only that, but there could potentially be a patch available that can resolve potential issues, like the one being released now for the Japanese version of the game. For the package version, updates can be pre-downloaded to your system even before you purchase the game, so make sure you look out for them. "