Nintendo's Evolution from Gamecube to Switch (...was pre-mediated imho)

...um interesting theory you got there..but it sounds like bs honestly

I wasn't speaking to the "asymmetric gameplay" factor.  I was referring to that being the jumping off point of merging console and handheld into a single platform.  The Super Gameboy and Gameboy Player allowed you to play your handheld games on your tv through your console.  But, connecting the Gameboy Advance to the GameCube through the link cable blurred that line between console and handheld for the first time.  It was asymmetric at the time, because the console power aspect couldn't be replicated on the go yet.

And, I was also speaking to Nintendo's dedication to local co-op and keeping gamers playing and experiencing games together in person. 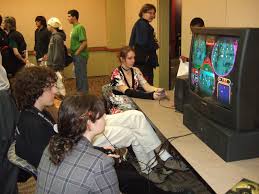 And, yes, there are times where ideas are developed before the technology exists to replicate it.  Especially when there is a need to keep price of a product low enough to maintain consumer interest.  Sometimes you have to make a choice between cutting edge tech that would price yourself into a niche market, or delivering something more cost effective that doesn't fully convey the idea you wanted to deliver.  There are pros and cons of each strategy.  But, as cost of technology decreases over time, yes you can revisit those old ideas and put out a better product that more fully realizes the potential of your original vision.

Don't forget the Game & Watch, some of those were  also a mildly successful two screen devices.

While there is no doubt a lineage between the Nintendo hardware up till this point. I say the biggest factor is that within Nintendo's own front yard, Japan, their audience was steadily moving away from consoles and buying more portables. The Game boy line was once just a side project for Nintendo's main teams, but Pokemon changed that, with each new portable the market kept growing until critical mass hit with the DS, but even then the 3DS was not a slouch in terms of hardware and software sales either. They recaptured some heat with the Wii but even in their own homeland, it wasn't putting up the same blockbuster numbers. Nintendo however it should be stated has always tried to link their home console and portable console hardware (old school Nintendo gamers must remember the Super Game Boy add on) so that the stronger system could help support the weaker one.

The move toward a portable -home hybrid was necessary as a means as the home console had become a shell of itself in Japan and they weren't getting adequate support overseas either. To recapture their homeland's audience and position themselves in a different factor for those players and developers outside of Japan, they needed a device that did everything. As they learned during the GC era, once developers and gamers choose the primary system, making another system that isn't different in some way will lead nowhere and the Wii U showed them, making it too different also leads to oblivion so they found a practical balance that people love. There was talk that Nintendo had not given up on the idea of a dedicated Handheld device before and a little bit after the Switch's release, much like their 'Third Pillar' talk around the time of the DS, GBA and GC, this was Nintendo giving themselves an out, but at this point it seems obvious that the hybrid (potentially modular which is what Nintendo has always tried to do with their devices) console is the way of their future.

I say all that to say I disagree.

While there is growth and definitely lessons learned from past consoles carrying over to the new ones, the Switch and its hybrid nature was not the original goal for Nintendo. If the Japanese gaming market had not swung so far into the portable/computer/mobile camp over the course of several years and the Wii U not been such a massive failure compared to past systems and their current competition, then we would probably not have the Switch in the current or even the next hardware generation as it would still be more profitable with two systems (including one that is obviously below the high cost of HD development line) to sell for a profit then just having one. They came to this point via necessity and the waves the industry pushed them. It did not blur the line the slightest. I could understand the argument IF you had been able to play GBA games on a TV and a GC controller with the link cable,

Yeah, it is the product that is bad if you can't make it work with the existing tech. Just because you have a vision of a product that can't be done doesn't make you a genious. I have vision of, say Star Trek warp drive, but apparently I'm just ahead of my time, so I make a crappy rocket that works on propulsion to be fired on the sky on a new year's eve. Am I a genious who's just ahead of my time, or do I just make shitty fireworks? It's one thing to have a vision and wait for the tech to be there, than release something half-assed that has no real change to succeed.

You could play GBA games on a TV and GC Controller with the Gameboy Player which I mentioned.

As for the rest of post, the following quote comes to mind:

“We learn wisdom from failure much more than from success. We often discover what will do, by finding out what will not do; and probably he who never made a mistake never made a discovery”

― Samuel Smiles, The Lives Of George And Robert Stephenson

You know, the problem with your logic is that you think:

1. This is a hardware issue

The reason for Switch to exist, is to have a system you don't need to develop the same games for two separate systems. Cost of game development have been Nintendo's primary concern for the whole 2000's, if you haven't paid attention. It was no problem back in the day to make a game for Snes, that was followed by Gameboy counterpart soon after, because it didn't cost that much money and time to make it, but as development budgets are in the range of tens of millions today, and development taking years in the making, even for the average games on the market, the game development process needs to be streamlined somehow.

Good catch. Actually everybody is moving one way or the other towards this hybrid approach: take Sony ever since they made the PSP S&L HDMI ready, or MS offering all thier games to be consumed on laptops as well or Apple by simply creating the App Store and Apple TV. This is a natural evolution of the industry, and Nintendo is fully a part of it.

It's more like the industry is moving away from TV. Even if you'd think stuff like Chromecast would be a move towards hybrid, it is still using the device that you stream from as an interface, making the "hybrid" approach rather useless.

If you look at the market currently, it looks like Sony is in a rather dire position considering the future, as Sony seems to be only one still locked into a TV. MS has UWP, so you technically can play all the UWP games on all Windows devices, Nintendo has Switch (and 3DS, though I don't think 3DS will be important anymore in the future) that don't require a TV, then there are all the Android devices.

Then again, didn't Kaz take the direction to make "Playstation" a service (not different than Steam) a few years back.

Really? I always imagined that PS+ and PSN are a 2-pillar aproach that Sony might capitalize on going forward. IMO when it comes to gaming they are pretty well set in thatr regards. As soon as they have the pricing figured out they should be golden in the age of the post-TV livingroom.