Who is your favourite Dr. Who?

Forums - General Discussion - Who is your favourite Dr. Who?

Who is you favourite Dr. Who?

Completely agree. Matt Smith, unfortunately, has had to play a complete a**hole Doctor in every episode I watched so far. I'm sure he is a good actor but playing a badly written, unsympathetic character plain sucks. Tom Baker is my fave He has so much enthusiasm and energy. He really plays it quite alien. You never quite knew what to expect with his Doctor.

YES! Finally something good on this site :D Dave all the way!

I'm a big fan of David Tennant's version and I've been very happy with Matt Smith. Tom Baker was great too, Jelly Babies where a funny way to keep the show light.

But, you forgot the very best Dr. Who of all time, Rowan Atkinson.

Haha, that was awesome, not seen it before.

As for the original question, not having seen all of the old series' I can't really judge them, though I have seen enough snippets to know that Jon Pertwee and Tom Baker were great, and Peter Davison was good too (though probably viewed in a bad light due to following Tom Baker... which I think is being mirrored today with Matt Smith after Tennant)

As for the recent three, as I said in another thread I think Eccleston could have been the best of the bunch, he is a brilliant actor and I liked his portrayal of The Doctor... however he was only in series 1 and it generally wasn't very good apart from him. The only good episodes were The End of the World and the Long Game, and the final two parter Bad Wolf/The Parting of the Ways were quite good apart from the ridiculous opening of the TARDIS by truck bit. The rest were average or poor.

Tennant is a great Doctor, and has also had some brilliant episodes:
The Girl in the Fireplace with the clockwork robots trying to repair a spaceship with Madame Pompadour.
The Impossible Planet/The Satan Pit with the Devil imprisoned on a planet orbiting a black hole.
42 where a spaceship is crashing into a living star.
Blink with the quantum weeping angels.
The Doctor's Daughter with Georgia Moffet (real life daughter of Peter Davison [5th Doctor] and Sandra Dickinson [played Trillian in The Hitchhikers Guide to the Galaxy]... and now wife of Tennant, that's some serious Sci-Fi connection)
The Waters of Mars with the first human expedition to another planet interupted by some intelligent water dwelling parasite.

And in general most of the other episodes are good too, though I was getting a little tired of the Daleks re-appearing, especially with Daleks in Manhattan.

Matt Smith has been good but unfortunately had Tennent to live up to. Karen Gillan has been the best of the bunch of new companions though... and while there have not really been many brilliant episodes in series 5 and 6 (The Lodger I think is my fave) there haven't been many bad ones either (apart from Victory of the Daleks) and I am enjoying the over-ruling storyline of season 6.

As such... here are my answers.

Tom Baker is by far the best in my opinion. If you have never seen any of his stuff, I suggest that you watch it. 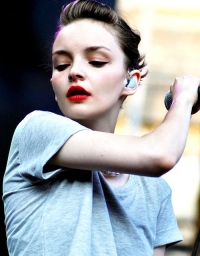 Can't look for the source right now, I'm at work, but if you google you'll find something. Karen Gillan is leaving next season, not sure about Smith. If he is leaving well new Doctor. I once hear that there is a limited number of transformations, wondering what will do the writers to do.

Yeah, Karen's quitting alright - but Mat will be around for at least one more season!

About the resurections/transformations: I've read that the Doctor only can regenerate 12 times, and somewhere else I read he can do it about 512 times...