Pretty dumb? if you say so , there was a dispute over naming rights , now nintendo hired sony , purely based on nintendo already been gaming software and hardware pioneers surely they should have had naming rights, sony knew what they were doing all along, they disputed the naming rights so that KEN "THIEF" KUTUGARI could run back to sony like a scalded dog with the hardware and software ideas that he stole from nintendo and hence the "PHONEY" playstation brand was born....... try to sugar coat over it all you want , SONY have always got by in this world by mainly copying other brands and its never really been thier talent that has made them successful , its always been the size of their damn wallet........ the gaming world was doing fine before sony came along , nintendo were (and still are) LEGENDS..... sega were fierce but fair competition to nintendo , sega started the console CD revolution with the mega CD and then the sega saturn.... nintendo were always revolutionary and sega were stepping up their game too by making 3d fighters as popular as they are today (virtua fighter, you know , the game that namco copied with tekken) sony aint given this gaming business nothing that wasn't already done or was already in production , Sega and nintendo were already taking gaming to the next level, virtua fighter , kirby , virtua cop , super mario world, sony saw an oppertunity and they took it like the RATS they are........... The corporation (sony) beat the LEGENDS (sega) because of the size of sonys wallets and NOTHINGELSE

The only thing I can confirm is that the new Halo 3 achievements will be released on or around September 25th. I'm not saying I believe this rumor but like the original post said a lot of things would make sense.

Well I guess we'll just stay tuned and wait. I can't imagine Microsoft would make THAT huge of a deal on something like this that could go wrong and crash and then they'd look like assoles.

I'm excited if it is true though. Not getting my hopes up.

U give 360 owners a bad name! Could u put anything more useless and just plain dumb in your sig?- I think not.

Sony fans give themselves a bad name, they jump on microsoft stories like there is no tomorrow, cya


Owner of all consoles cept DS.....Currently in love with prototype!

i have the feeling that a rumor from vgchartz will be true again...

Just to add to the hummmm on this.. anyone remember the leaked Halo 3 additional achievements last week? This one stood out... look at the description. So something is going down Sept 25th.. but it may just be halo 3 related or much more. 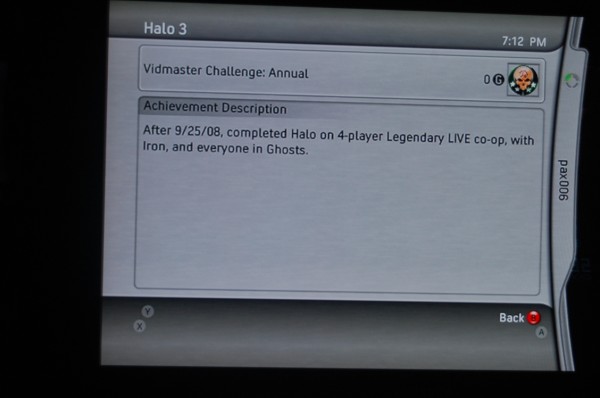 There is almost certainly something going on around 9/25. What that is at this point who knows.