Forums - General Discussion - The Mark of the Beast

Why am I pompous? Because I feel like it. Couldn't give a fuck less if you think I'm trashy.

Although, I don't see it as being pompous, I see it as calling out bad ideas and logic for what they are. I'm not going to respond to everything you want to copy and paste, because it takes about 2 seconds to copy and paste a website, and a lot more than that to actually explain why the logic is flawed. It is essentially a strategy of piling up more and more bullshit, because I cannot possibly address every bad argument on the internet. Especially when, again, this source does not actually support your argument as it is not claiming anything about the historicity of Jesus vs Caesar, or claiming that the resurrection is verified. So, lulz.

As for getting educated, I'm good on that. The sign of being educated is actually being able to synthesize information and turn it into something, i.e. your own argument. So, maybe try that... with someone else though. Because at this point I'm essentially just arguing with google search results, so...

You don't need to know the prophecies to judge them vehemently.
A "prophecy" by it's very definition means to "predict" something that may or may not occur in the future.

Any rational thinking, logical person would thus discard such garbage for a more evidence, logical based approach.

For example... You can make a different, random prediction/prophecy every day, eventually probability mathematics will win-out and you will eventually end up being correct.
Doesn't mean the prophecy is correct however or is coming from some "special source of truth" that is pertinent to the prophecy... Those need to be judged on a different set of merits.
It's all a game of chance. Not truth.

No religion has evidence to backup it's assertions. Period.

We know Julius Cesar lived due to...
- Caesars written works on the Gallic and Civil Wars in which he participated.
- Extensively documented by historians during his life.
- Monuments and coins bearing Caesars likeness and name being ubiquitous from the era.
- Without Caesar, the entire historical timeline of the Roman empire ends up being a rubbish mess.
- Caesars namesake carried on through his heirs.
- Acknowledged by competing/enemy empires of the era and also written in their historical works.
- Caesars Temple to signify his remains and personal belongings/achievements. (Cremated.)

The "end times" will happen eventually. It is a part of life.
If we humans don't royally screw the planet, the sun will eventually turn into a Red Giant and roast everything.

But for thousands of years, Theists have been arguing about an "end time" coming.
How many thousands of years worth of chances are you going to give them? Eventually a prophecy that is as vague and wildly applicable as that will eventually turn out to be correct due to how the universe functions... Completely separate to your non-proven God.

Well.. Arguably, religion doesn't evolve. Peoples interpretations of religion evolves. Well some.
There are some denominations that stand-by a literal interpretation of the Bible, including all it's hate, death, violence, misogyny, homophobia and cruelty.

Once it was normal for women to serve men, for the LGBTQI community to be chastised by conservative Christians... But the interpretation of the Biblical text changed to accommodate those issues.

No. It's not possible.
Because once your prophecies are proven incorrect, they just get "reinterpreted" and the cycle begins again.

People have spent THOUSANDS of years constantly telling people the "end times are cometh". - Here we are.

But I am going to chime in here... Because what the fuck do I know about death?

I have done road crash rescues where a car was turned completely into a chunk of solid steel... Where the passenger walked away without a bruise... And the driver was like a crushed tomato... With no identifiable remains.

I have scaled down the side of high cliffs and held onto a woman for 12 hours, keeping my hand on her wound to try and keep her alive while she bled out all over me.

I have fought the largest fires in the planets history... And see how it destroys everything in it's path, except for a small home with a family inside... Survived entirely by chance.

I could keep going, but I think you get the gist.

You just did a word vomit without understanding what the words actually meant and their implications.

Think of it as more of a "network cable" between two points in a way.

For A.I it doesn't really mean much, nothing we haven't seen now over shorter distances via the Internet or Ethernet cable.

The Bible is a book written by man interpreted, translated and altered from the original Abrahamic texts... Which is also the same texts that forms the Islamic Quran that Muslims follow and the Torah that the Jewish follow.
All the same stuff, just a different perspective.

I.E. The Bible has the word "Homosexual" in it, which as a word has only existed for a few hundred years, yet conveniently ended up in a book that is thousands of years old? Common. You can do better than this.

Now the fact that you assert that ONLY those who have "faith" (Which by it's definition is blind belief without evidence...) are the only ones who will be "saved" and the others... Well. They get less than an ideal ending... Is just your typical coercion of others by using the power of fear and threats. - Which is a powerful tool to bend people to your indoctrinated ideology. It's blatant bullshit.

If your "apparent" God is willing to subject people, people who may have saved lives by stopping a fire from burning a home down, cutting a person out of a vehicle, parent donating an organ to save their child and more... To eternal torment, damnation, torture and "get their head chopped off" because they won't worship them?
Then that is not a loving, fair or just God and thus your God doesn't deserve recognition or respect... Let alone followers.

I am happy to live an eternity of torment, my conscience will be clear.

What you believe is irrelevant.
People believe all sorts of rubbish, like the world being Flat.

What matters is the evidence.

We aren't at a technological level where Quantum Entanglement can be leveraged in such a way as you describe.

The Bible is the claim, not evidence.

We should cut off a woman's hand for defending her husband. - Deuteronomy 25:11-12.
If your Brother dies, you need to have sex with his wife and get her pregnant. - Mark 12:19
God commit genocide and murders everything to make the world less violent. - Genesis 6:11-13.

Let's not forget things like incest, slavery, killing of children and more that the Bible promotes.

Not to mention the Bibles entire timeline of how the Earth was created and life came to be, completely and UTTERLY contradicts the evidence we have now.
I.E. The Big Bang, Evolution and so forth.

The Bible also does not, will not and can not ever explicitly mention "cryptocurrency" otherwise it's just another rubbish alteration to fit an agenda... You are just trying to shoehorn rubbish to make your belief system more relevant to the current day.

I wasn’t even going to respond to any of your nonsensical ramblings as I quite enjoyed reading them, but when you claim entirely incorrectly that there is more evidence for Jesus than Caesar I have to intrude. Absolute bollocks. There is a mountain of evidence for Caesar and mere fragments for the historical character of Jesus. Biblical scholars aren’t even sure if the character is based on a real individual or an amalgamation of eccentric frauds operating at that time. And oh yes, I have researched and researched this topic over a span of twenty years (historian). Also, just as an aside, Jesus’s resurrection isn’t a fact nor could it be a fact; there are to this day zero examples of any previously living thing being brought back to life from the early or late (or any) stages of decomposition. Everything you claim and assert is based on a wildly popular work of fiction that has just been taken way, way too seriously. It strikes me as both funny and scary that around 4.5 billion people on this planet live their entire lives based around ancient fairy tales and to make matters worse, wish to dictate to others how they should live their lives based on said fairy tales. 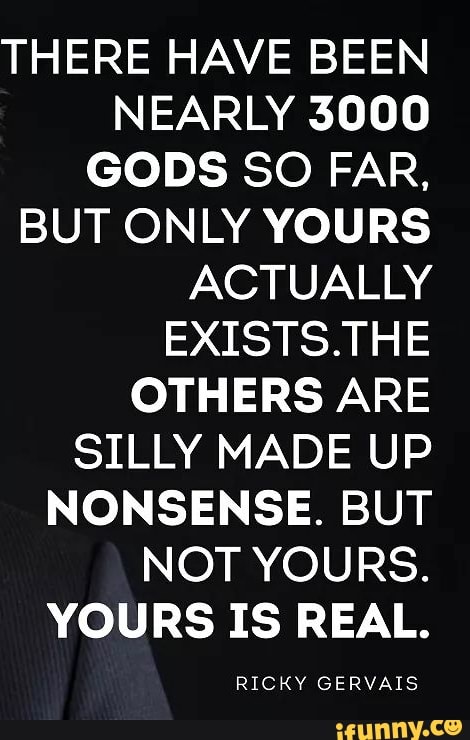 “We are all atheists about most of the gods that humanity has ever believed in. Some of us just go one god further.” - Richard Dawkins

Somebody should come up with a nicer God to sell people. I'd be a lot less opposed to abrahamic religion if they didn't have such a narcissistic, vindictive prick to worship.

Wtf is this thread 😂

There is no necessity for an individual who cheated death to be able to do so multiple times. You asked earlier if anyone throughout history (other than Jesus) has been resurrected after being proper dead and there is one example: Lazarus. Lazarus was resurrected by Jesus after being dead for several days, yet he was not immortal. Again, you are introducing a number of ifs and suppositions as if they are certainties or requirements. While it is possible that an individual who "cheats death" may be immortal, it is in no way a requirement or certainty dictated by the provided scripture.

Also, unvaccinated people are literally putting the population in danger. There is no mystical belief there. It is objective reality.

To summarize, my issue is not with your explanation for how scripture could be explained in modern contexts. I very much agree that it is possible to translate scripture onto modern contexts. My issue is with your assertion that scripture could only be applied to modern contexts. As I previously stated, the metaphorical nature of Revelation allows it to be grafted onto many different contexts by making different assumptions regarding how much is literal and how much is figurative. You seem to be buy your confidence by making assumptions that aren't necessitated by the scripture which I have further problems with.

The theological view of Preterism is largely based on this idea, assuming that many of the things foretold by the bible have already happened over the last several thousand years and lining them up to certain points in history, so it isn't even consistent within the church how these things are to be interpreted.