What makes you think that feeding the shader cores requires "more memory bandwidth"?

You are of course aware that "feed the shader cores" is much faster on the PS5 than on the XSX?  For the simple reason that the gpu runs faster, and there are fewer cores to feed.

Brilliant way of breaking down how irrelevant the graph is. Don’t forget that some of those bars are also varying in power, so a bar that looks like an advantage for PS5 can easily be a disadvantage depending on the game. So in your analogy, the Corolla could have four doors, or it could have two. It could have 470 in trunk capacity, or it could have 300.

Cool you can boot up a console load a game get to the main menu and then go to your save file and load a game. Or you can just select the game you want and it instantly puts you right back to where you were hours or days or weeks ago, no loading or waiting required.

Yes, I had a similar problem with that graph, some things there are more important than others and the graph doesn't weigh the importance of the different things it's touching on.

With the blurry image thing... yes, that goes without saying. The PS5 will on average run at lower rez than the XSX with all else being equal, or more specifically if both consoles are locking framerates. But why this is not important is because of what resolutions we are talking about to begin with. While 2052p is a 16% lower resolution than 2160p, that's not the kinda difference that's perceptible unless you pause the image and zoom in by like 300% or something and even then it may be still hard to see. But yes, its a difference.

Oh.. and with regards to their rated clocks? They will hit those clocks whenever they are needed to hit them. Especially the PS5. It may seem hard to believe, but its actually easier for thePS5 to hit its 2.2Ghz clock than it would be for the XSX to ht its 1.8Ghz clock. Long story...

Technically... nothing is ever maxing out their CPU/GPU "at all times". They just don't need to cause games aren't designed that way. To be clear, I am talking about these things ever hitting their max clocks. Whenever the software calls for it either the PS5/XSX would be able to hit those max clocks.

Now hitting max load is a completely different mater. Which is what I believe you ar talking about. Yes, its harder keeping more CUs busy and running efficiently and that is a benefit of the choice sony made with their CU count.

Current gen, suspend and resume dies when you kill the console. Next-gen that shouldn't be a problem cause that suspended states just copying the active heap of the game code from RAM to the SSD. Its probably even going to be less than 6GB of data. So as long as that data is on the SSD, then suspend and resume would be persistent through total system shut downs.

I know people are all excited about this thing, ut in truth this is just the natural by-product of having an SSD as fast as these SSDs are. Its not some next-level software wizardry or anything and the PS5 wouldn't just be able to do it but b able to do it faster. Just by having a faster SSD in there.

You know the real kicker? ven if these consoles were 20TF machines... devs would still make games that would have hem have to scale rez.

But don't get me started though... less I start talking about PC hardware that you can build in 2020 for $500 that would be able to perform as well as these consoles But please, lets not go there.

Where are they getting the PS5 TDP from?

Yep, I'm confident MS will do a lot better next gen, and this is very good as more competition is a great incentive for the other companies to do better.

Now I'm just wondering which will be the price for XSX and PS5. MS put more money in the brutal power and their optimizations and velocity architecture, Sony in the very custom SSD and all the system customization and architecture and cooling system. Which Console cost more to produce ? At this point I have no idea, maybe the ones here with better hardware understanding could do a better guess.

As you said, the biggest selling numbers are made by the best and most popular 3rd party games, which will most probably look and/or perform better on XSX, and this is already a very good point for MS.  Next Gen will be more interesting I believe :)

Sony needs to do something about their memory bandwidth though. Thats the one area I see there being an issue for them down the road. 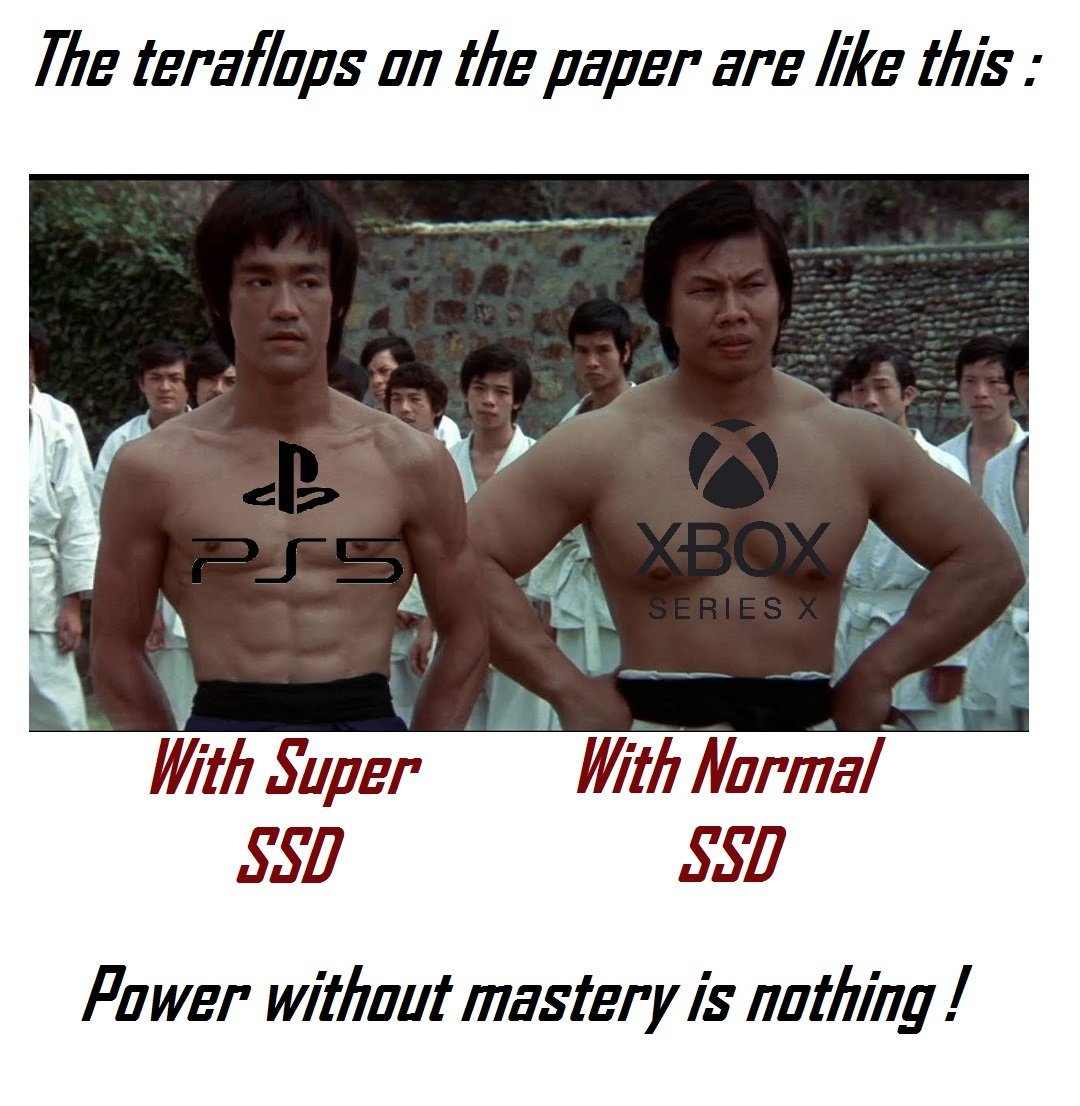 Makes sense, and makes me less excited for the 'feature' as the OS will likely reserve space on the SSD for suspend/resume for multiple games. I guess it will be configurable and booting up a game and pressing continue won't last much longer anyway from SSD.

I do wonder if we can have a browser on PS5 that doesn't run out of memory all the time :)

Yup... but the good news is that the OS would be serving far less space in the SSD than they currently do in current-gen consoles. The reason being that current-gen consoles have to have a certain amount of space to "copy" a game to during an install. Next gen console wouldn't need to do that anymore. So of say te 825GBn the PS5, 6-8GB would be reserved per game for instant resume, lets just call it 8GB and let's say sony supports the feature or 3 games. That's 24GB gone. Then OS catch would probably take up another 10GB depending on how snappy they want things to be.

As for the browser...what sony's approach tells me is that they probably have a hard limit of less than 500MB for apps,that's the only reason I can see as to why even the PS4 runs into RAM issues when using the browser. Hopefully, that number goes up this time around cause now they could technically have an OS that is 1GB when in the background and is 8GB when upfront.