Never seen them in Luxembourg because petrol stations usually aren't that well stocked with these kind of items ;)

But no I've never seen them in Germany either though to be fair I'm not spending much time in these sections (other than quickly grabbing some onions). I'm very sure though that our discounters like Aldi, Lidl, Netto, Penny etc. don't have them.

Are those 100 injured/killed people also driving cars into other people directly after that?

Woke up to stimulus money. Dunno why it took sonlong but at least i got it.

Seasoning/right cooking time is key,well yeah as long as you can mildly taste the different flavours of all the ingredients.

Also depends on the diet you're on,from my own experience the more healthier i eat the more i begin to dislike the taste of unhealthy fatty snacks and like the taste of plain vegetables as it looks like their flavour strenghtens depending on eatingstyle.

Probably has to do with combination of brain longing for different nutrients/endorfine release and also a bit with the tastebuds themselves.

I think it's only a US thing to have a separate bagger / carry out to car service. I live in Canada and while stores like Walmart will put it into plastic bags for you at the register, it's not a separate person. The supermarket I go to only offers to sell you plastic bags if you don't bring your own bags and will only assist the elderly when needed. I rather pack it myself anyway, might as well pre sort it for faster putting away at home.

Only beer, wine and liquor bottles are recycled here at the stores (which are government licensed separate stores, only sold with ID) The rest goes in the blue bin and gets sorted out at the recycling center. Milk comes in sets of 3 x 1L plastic bags here that you put in a plastic container. 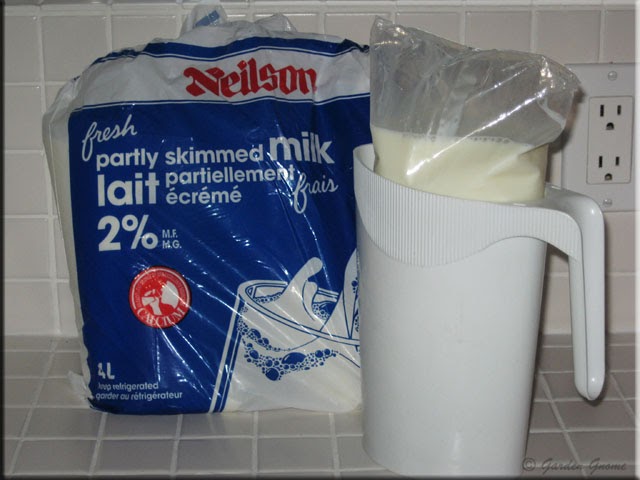 Still bad for the environment, the plastic goes in the regular garbage. When I lived in the Netherlands they had a barter system with durable clear plastic milk bottles that you brought back to the store for re-use. It looks like they went back to milk cartons and non re-use plastic bottles, can't find a picture.

I do prefer the recycling rules here. It was always a question what went where in the Netherlands. Here it's simply, everything with the recycling logo on the package goes in the blue bin, gets sorted out at the recycling center. But most still ends up in the landfill bleh. FACT: About 86 per cent of Canada's plastic waste ends up in landfill, while a meager nine per cent is recycled. The rest is burned to create energy, which causes emission problems, or the plastic enters the environment as litter.

Anyway plastic bags were on the outs before the pandemic hit. Then everyone panicked that bringing your own bags would spread the virus so stores started providing tons of plastic bags again. Luckily your own bags are allowed again currently, however the cupboard we had with plastic bags (to re-use as garbage bags in the bathroom) which was almost empty, now hardly closes again ugh. Set for another 10+ years of garbage liners lol.

Not only supermarkets started using tons of plastic again
https://www.cnbc.com/2020/06/28/coronavirus-plastic-waste-surges-as-restaurants-use-more-disposable-packaging.html

The coronavirus has produced another sort of outbreak: a global resurgence in single-use plastic and a torrent of mostly unrecyclable personal protective equipment littering city streets, clogging sewage pipes, even turning up deep below the waves.

“This is only the beginning,” said a spokesperson for Opération Mer Propre (Operation Clean Sea), a French environmental NGO that collected nine surgical face masks and 14 latex gloves during a recent dive to the Mediterranean seabed around the resort town of Antibes. “If nothing changes, it will become a real ecological disaster if not a sanitary one,” the group said on Facebook where images of the debris were posted last month.

The plans to completely ban plastic bags at supermarkets in parts of the country have been abandoned for now.

I came from Europe, hence the funny looks and getting cursed out on the road for cycling like I'm going through traffic in Amsterdam :) Compared to The Netherlands it's still the wild west here when it comes to 'rules' for cycling on the road. It's a huge grey area and bicycle lanes are very inconsistent to nonexistent. (Plus traffic lights for cyclist, never seen them here. Construction, no detours posted for bicycles)

Everyone does use the carts to bring the stuff (in bags) to the car. Some people are just lazy and leave the cart on the parking lot. Then probably get just as mad when they run into an abandoned shopping cart with their car...

Stealing carts is not common here. Nearly everyone uses a car to do groceries after all. It was common in Amsterdam. Students and others taking the carts home, and you often saw carts that had ended up in ponds and canals.

Seems it's still a problem

https://translate.google.com/translate?hl=en&sl=nl&u=https://nos.nl/l/2298347&prev=search&pto=aue
It is a persistent phenomenon: shopping carts and baskets that disappear from the supermarket. Every year thousands of copies are 'borrowed' or actually just stolen. Much to the chagrin of supermarkets. It leads to millions of euros in extra expenses.

I do prefer living here, much more room, never any trouble parking and once you get away from the busy streets, perfect cycling. I can cycle for 80 to 120km here and hardly see anyone along the way. In the Netherlands it was constant stop and go, weave through tons of cyclist and pedestrians while dodging mopeds. Any slightly nice day and it was slow going, bicycle traffic jams... Here you can also leave your bike unlocked to pop in a store and never any trouble to find a spot to place it. I have a trailer which I used to take the kids cycling (they're too big now) but it's still fine to get pool supplies for example. 40kg of salt and 20L of chlorine, chemical load coming down hill lol.

No more of this!

This is my downtown nowadays :)

We actually didn't own a car until 2006. We lived in Brantford until then, across the street from a 24h supermarket. Then we got an electric hybrid and quickly found out that sucks in the cold winters here. Takes forever to warm up and is hardly more efficient in the cold. We drove it for 4 years and didn't really break even for the extra cost vs lower fuel consumption. The small trunk space (due to battery) was a pita as well. So when we got kids we switched to a SUV, 9 liters per 100 km. Much worse than the hybrid (which could do 4.5/100 in summer, but up to 7 or 8 in winter). Happy wife, lots of room to put plants in (gardener) We don't drive much, we'll stick to gas for now.

Having a garage helps the environment as well. A lot of people around here have remote starters and have their car idle for 10 minutes in winter to thaw out the car before they leave... Then you have lawnmower pollution. The EPA estimates that hour-for-hour, gasoline powered lawn mowers produce 11 times as much pollution as a new car. According to the EPA, each gas-powered lawn mower produces as much air pollution as 43 new automobiles driven 12,000 per year – lawn care produces 13 billion pounds of toxic pollutants per year.
The world needs better battery tech. The heavy batteries for edge trimmers hardly last 10 minutes, then 12 hours to charge again. Electric lawnmowers aren't popular either. Properties are so big you would need very long extension cords which you can run over or decapitate plants with :/ I used a push mower at our previous place, it sucked. Canadian weeds are too tough lol. Anyway no need to mow now due to the long heat and no rain. Grass is all yellow.

Back to the numbers. Europe is still declining, however slightly less each week. The current 3-day average week over week change is 96.2%, a week ago that was 94.8%. Not much of a change, pretty steady overall.

Norway, Denmark and Ireland are pretty much off the chart. Very low numbers each day.
Switzerland and Austria are still heading up a bit and have swapped places with Belgium and the Netherlands.
Poland still on the same level while Germany is recovering from their latest outbreak.
Italy, Spain and France seem to have lost their downward momentum.
The Ukraine might have peaked now, heading downwards.
The UK is still going well despite a little uptick at the end.
Sweden's reporting is getting worse and worse, last update was July 2nd.
Russia ever so slowly declining.

It looks like Belgium and The Netherlands will soon hit the bottom.
Spain went up a little last week, still tracking lower than expected after all the changes made to their reporting/counting.
The Ukraine hasn't peaked yet in reported deaths, probably seeing the effects of their recent resurgence in cases.
Russia, despite under counting, is firmly leading the pack.

It's now been more than 19 weeks since Italy started charting...

Tomatoes, etc are fruits, some people think of them as vegetables and that's ok.

They wont even mandate you have to wear masks.... its still optional in florida right?

Yeah the general public will mostly agree that tomatoes, cucumbers, ect are vegatables.
I think most would call peppers a fruit though.

In danish we even call them pepper-fruits (when we say pepper, we generally refer to the peppercorns in the salt/pepper shakers, type pepper).