Good to know. Just checked my installation and deleted the offline file.

Though from what I've read, you have to download the world updates separately (about 10-15GB each). Couldn't find anything in the store so maybe they can only be downloaded through the main menu or they will be added at a later date (launch).

Thought they would have just added them to the base game but yeah, looking at it, as Flight Simulator has its own marketplace built into the menu, that is where the World Updates are downloaded from.

News folk? Do I count as news folk?

turns out it would look pretty damn cool (as seen below) pic.twitter.com/UV5v3lAobb

After Death's Door, this will be the next Xbox banger!https://t.co/TUFNqTHEgB

Games have always been one of the most technically complex forms of media created. They are limited only by creators' imagination and their ability to translate that vision to reality through technology. We want to enable any creator, anywhere on the planet, to make games for our ecosystem. And, to help with that we've made the Microsoft Game Development Kit (GDK) available on GitHub, free of charge!

The GDK is the same base development kit used by hundreds of game creators today and was previously only available to approved partners building for the Xbox ecosystem. The GDK contains the common tools, libraries, and documentation needed for developers, it's the future of the Xbox ecosystem across all platforms—PC, cloud, mobile, and console.

By using the GDK, creators will get a head start on their game development based on a technical foundation that will also allow them to unlock functionalities to integrate with the Xbox ecosystem like commerce, achievements, multiplayer and more. Access to publish on the Xbox ecosystem of stores is still private, following common industry licensing practices. Completing the journey to publish a game to the Xbox store on Windows – directly or through the Game Pass program – involves applying to qualify for an Xbox partners program, signing a license agreement, and configuring gaming services. Interested creators can check out the ID@Xbox program for more information.

Q: Why is the GDK a binary release and not an open source release on GitHub?

A: We will continue to take steps towards making more of Xbox game development more open.  This is just an early step in that direction with a binary release of the installer to modernize how we distribute the software and enabling collaboration around source that is available (Xbox Live, PlayFab, and Game Development Samples).

From my limited understanding, this sounds like great news for indies? Admittedly not everything is available or free but as they said it is only an early step and they will continue to take steps towards making things even more open, sounds like a good start.

The demo is very short: ruins, floating diamond thing, that's it. I'll embed it in this article whenever it's uploaded somewhere or, if no one gets around to that, I'll rip it from the GDC talk, but for now I'm trying to avoid compressing an already-compressed stream just to show you a few seconds of rendering. As you can see in the still I grabbed below, it doesn't tell us much we didn't already know, but it does contain nice rocks.

During the GDC talk where the demo debuted, Coalition technical director Kate Rayner said that Unreal Engine 5 game development is still "really early," but that this demo was a good opportunity for the Microsoft-owned studio to "kick the tires" and collaborate with Epic on Xbox optimization.

Alpha Point was originally made with Unreal Engine 4—where it chugged in the editor—and was then moved to UE5 and completed. According to Coalition technical art director Colin Penty, most assets in the demo are made up of 300,000 to 500,000 triangles, 15 times the number of triangles in the average asset from Gears 5, a game that came out in 2019. The studio also worked with million-triangle assets, Penty said, but parts of the development process become "too painful" with assets that big. Penty also noted some of the limitations of the Nanite geometry tech utilized for the ultra-complex assets. It doesn't currently do translucency, for example, so most of the foliage in the demo doesn't use it.

Although they can be lit dynamically with UE5's Lumen system, it seems clear that Nanite-powered rocks are pretty static right now—perhaps that's why we keep seeing rocks in the first place. In a Nanite overview video, Epic said that the tech doesn't currently support non-rigid deformation and world position offset, an Unreal Engine function used for ambient animations like grass swaying.

Seems like a pretty safe prediction at the detail levels we're seeing now. Penty also showed off a brief UE5 character rendering demo, noting the ridiculously high polycount of the hair, which is handled by Unreal Engine's Groom system.

"One funny stat I was thinking of, with the eyelashes being 3,500 triangles: That is kind of the budget of an entire Xbox 360 character, now contained within the eyelashes of one of these characters," said Penty. 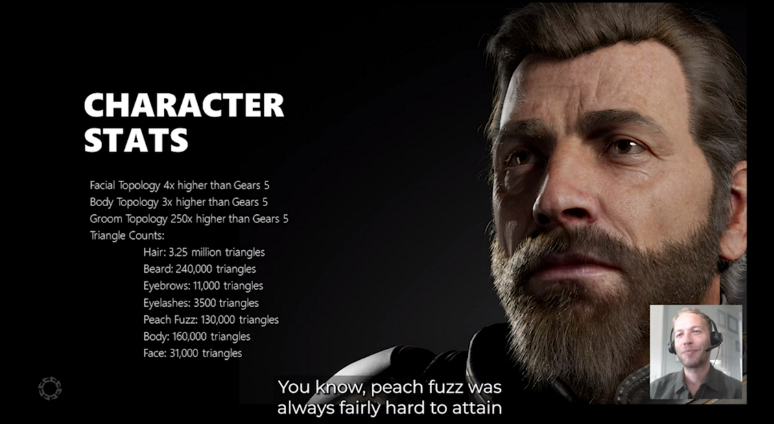 For comparison with your specs, Alpha Point runs at 46 fps on an Xbox Series X at a 4K display resolution. I say display resolution there because the actual render resolution was set at 50% or higher and upscaled to 4K using Epic's Temporal Super Resolution. So, you might get around 46 fps rendering at 1440p (but not 4K) with PC hardware that's comparable to an Xbox Series X. Or you can also flip on Temporal Super Resolution, or possibly DLSS, or another upscaler.

Regarding The Coalition's next game, whatever it is, you can scour the tech demo for clues when it's available to watch, but Penty said that the assets in Alpha Point were made for Alpha Point, and are not from a game project, and that The Coalition isn't announcing a game at GDC. So, it's really just some rocks, I'm afraid.

Long long time ago, I played Steep for about one hour when it was part of Free Play Days. Didn't have a strong opinion about it back then.

That changed when I played it again thanks to GamePass. I always wanted to buy it but there are several different version and it was quite hard to figure out what version to buy to get all the content. Turns out there is NO version that contains all DLCs so I held off.

Visually, the game is fantastic looking for an Xbox One game. Hard to imagine that it's from 2016. It's of course running extremely smooth on Series X as well.

The game offers a huge amount of different events and sports. The extreme pack also includes a rocket wingsuit which is not only extremely fun to use but also very useful when exploring the mountains. Steep features over the top gameplay, similar to the Tony Hawk series. Snowboarding is probably my favourite sports but the wingsuit (regular and with rockets) are a close second. Skiing was the one I used the least.

The game has some frustrating parts. Some events have horrendous checkpoint placing or are much harder than they should be when going for the gold medal. When snowboarding, the camera might suck here and there as you cannot directly control it. This is because both analog stickts are used to control the board.
Lastly, the crashing system could be better. It feels a little random what jumps cause you to crash and when you do, your guy will roll down the hill for ages. It would've been nice if you could stand up a little sooner and therefore not miss out on checkpoints because of it (will happen all the time).

I bought the Season Pass which was on sale recently. What's not included is the Road to the Olympics 2018 DLC, which I'm definitely buying once it's on sale since I like the game very much.

Overall an impressive sports title and the best snowboarding game I've played in ages. Had much more fun with it than with EA's SSX reboot last gen. Ubisoft's Riders Republic is made by the same devs so I'm having high hopes for that game now.

We’re excited to announce new peripherals from our licensed partners to enhance your Microsoft Flight Simulator experience on console and PC. https://t.co/vvyskD72JY

🔉 HELLO IT'S YOUR PILOT SPEAKING

go on, tell us where you're going first 💬 pic.twitter.com/VbBr3SYLgn