A lot of the haters really should either play the game or just accept the aggregate review scores as truth. Too many haters are going off inaccurate or cherrypicked information from streamers/leaks. The game is a serious step down from previous games in the franchise, but still good enough to buy and play. I mean, 81/100 on Open/Meta is a very good score to have. Sure, it isn't 87 or 89, like a properly made Switch Poke'mon game would have been at, but it's still a damned good score. If people want to disagree with the Meta/Open score that's fine, but at least base it on having played the game yourself.

The quality by itself is not the problem here. From what I've seen online, the game is good, if not somewhat hand-holdy, with a story at least on par with Sun/Moon. There are no real game breaking issues, and the main mechanics seem to be the same as always. In terms of it being a good game, I'm sure it's fine.

That's not the problem. The problem is the dangerous precedent this sets. Game Freak has always had a worrying tendency to create features and abandon them with the next game, but what we're seeing now is unprecedented. Half of the pokemon unavailable, moves cut, megaevolutions and Z moves cut, the online system gutted and under a paywall (though that's partially Nintendo's fault)... This is quite a lot of content abandoned, and not being replaced by something with the same weight. There's a lot of things that many veteran fans enjoy that has been jettisoned, things that it seems the general public really doesn't care about. If this continues and is accepted, there is no reason to assume they won't just continue the downward spiral of cut content, like it's happened with other gaming franchises over the years. Not to mention the fact that Game Freak has been quite bad communicating all of this, being misleading at best and actively lying at worst. This is not an attitude I want to reward.

Would I enjoy the game if I purchased it? Sure, it's Pokemon, I like the series, I would not have stayed this long if I didn't like it. Will I support this attitude shift? No, I don't think this is right for the future of this series, and even if me not buying the game gets lost amids the possible +15 million copies this is probably going to sell, I am drawing a line in the sand. Buying the game would send a message to GF that they could do this and still get my money, and that's a problem, because that's the complete oposite of what I want. This doesn't mean I don't want you to not buy and/or enjoy the game. If you are happy with the product by all means enjoy it, you have every right to enjoy a product you've purchased. But I don't find this changes acceptable, and thus I won't support them with my purchase. And this choice is as acceptable as you buying the game. There is no wrong choice here, we just have different priorities and opinions of what a Pokemon game should and should not be.

TL.DR. It may be a good game allright, but as a Pokemon game is a huge step backwards, and I don't want to support this decision.

What surprises me is that anybody expected Pokemon to have good graphics, the games have always been simple and clean....the Pokedex cuts are one thing but the visuals are pretty much what I expect from this series. However, I gave up on Pokemon a long time ago, having to buy two very similar games and then maybe a third or fourth minor upgrade, released a bit later, has always seemed like complete money grabbing that everyone just ignores because it's Nintendo.

A google search says Nintendo owns ~66% of Pokemon and thus could mandate changes to improve quality, but perhaps that percentage is incorrect.

I don't think mobile is a problem, Pokemon Go has been out and yet the mainline series sells as it usually does, in fact it even caused a boost for Sun/Moon iirc. The money it makes should actually help, not like money is an issue I imagine unless the top heads are hoarding it all.

It's ignored because your reasoning is dumb.

Surely there's no way Pokemon Home/Masters/etc. takes millions to make, like you said it's surely little investment. It's probably true that the mainline games make less money though has this been confirmed? Undoubtedly when Go first came out, but is this still the case? Even if it's true though, the mainline games still make plenty of money and are the reason all the anime/merch/card games/etc. exist so it's well worth investing into. 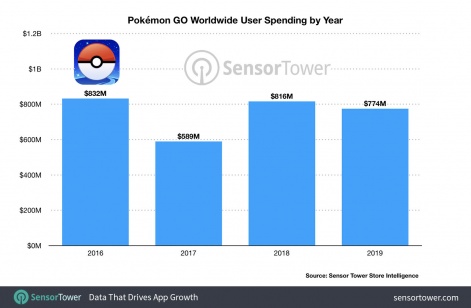 Pokemon Go still makes money. And a lot of it. This is not going to stop just it's not in it's cenit.

Yeah, it's immensely profitable for the publisher, but where is the benefit to gamers to buy an incomplete version of the game? They launch at least two incomplete versions of the same game, every generation. The standard defense is it's actually an advantage because it forces you to make friends or something, but I don't buy that. Pokemon trading and battles would still be just as relevant even if everyone owned the whole game, but Nintendo knows that by splitting it up, they'll rake in cash from people who have to buy both games. It's just a cash grab.

You actually needed to buy more than two versions because there are three starter pokémon and you can only choose one per save file, and there's only one save file per game. So in the first generation you had to buy Red and Blue and Red again to get all pokémon. Not to mention that you had to purchase a second Gameboy in order to trade.