1.Overall, Saber and CDPR hit an impressive bar of quality here. Clearly, performance can vary, but on balance it holds 30ps more often than I expected. The Witcher 3 Complete Edition pruned back everything it can to be playable, while still somehow retaining a lot of its best visual features. Graphical points like reflections, light shafts, water physics, and even a high NPC count are incredible to see on a handheld.

2.When it Docked, 720p is the highest we've seen the game render at while docked, dropping to 960x540 in our tests at lowest, seen while panning past the city in Toussaint.

3.Portable mode impresion, Handheld play works the same way as docked - a dynamic pixel count that adjusts based on load. Here Switch uses 960x540 as the top number, but drops steeply where it needs to. Pick a busy street in Novigrad for example, and the lowest reading comes in at just 810x456

4.NPCs are drawn at half frame rate at distance their draw distance is compromised on Switch, but the rendering range on NPCs is generous enough to cram everyone in. The only snag is that the frame-rate on characters is halved towards the distance.

5.Pop in issues beyond the inevitable blurriness, there are further downsides. The first is pop-in; often it's well-handled, but Switch has limits in how quickly it can draw everything in. The big trouble spot is cut-scenes; fast camera cuts overwhelm the system, and the way geometry flickers in and out can be pretty glaring. Detail-rich areas such as Novigrad can also push the streaming systems hard, resulting in pop-in that varies on repeat tests.

6.Textures, filtering and sound quality also take a hit, The Witcher 3's drive for compression also has an impact beyond FMV quality. Textures and sound also take a hit. Texture assets and filtering are of a notably lower quality, where a form of trilinear filtering is used which adds to the generally blurry look

7.Foliage density compared to PS4, there are few surprises in terms of console comparisons. Beyond the resolution drop, shadows, textures, and LODs are altered. Panning around the outskirts of Novigrad, foliage density is pruned back significantly. It's all reined in, creating a generally less filled out world - at a distance anyway - on Switch. It's amazing what's achieved on a smaller, less powerful system, but the trade-off to make it happen can't be overlooked.

8.Docked performance, and while there are some notable dips, the bulk of the time in areas like Velen - at least outside towns - delivers a mostly solid 30fps. Docked play is solid, but dense areas like Novigrad will see performance drop to something closer to 20fps.

9.Portable performance, portable play is similar, but not quite as robust overall. Once again, we're looking at 30fps, but when taxed in stress points it'll go into the 20s

10.It's a decent port, but overall it's playable if you can play the games deep below 25 fps and  the cut-backs are most certainly there and very glaring.

definitely not the version you wanna be playing docked on a TV if you have any other console available. I suggest playing it on handled mode. 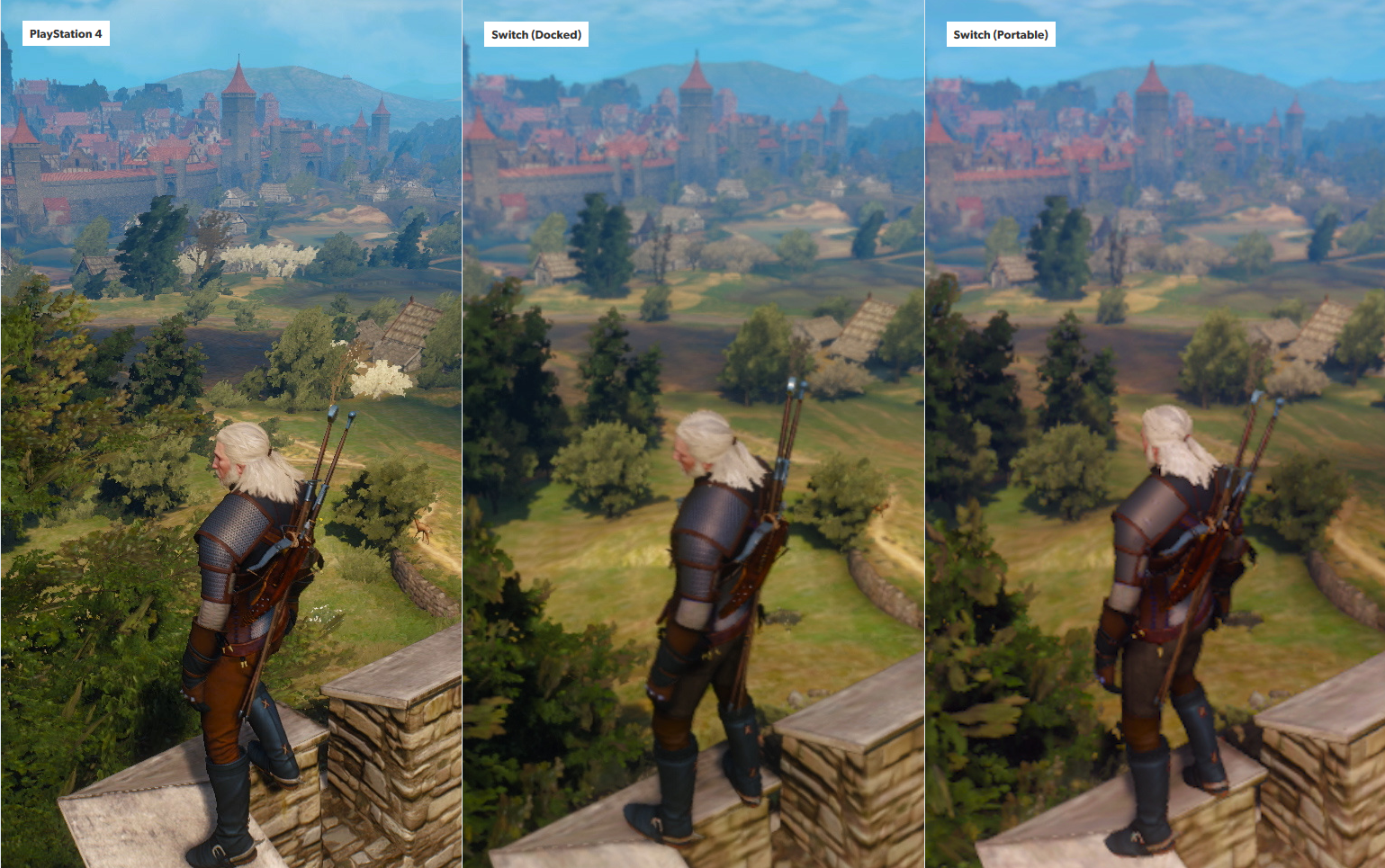 EDIT: For comparison i also add with Arstechnica review

YES, IT HAS WET BUTTS —
“The Switcher” is real: Witcher 3 on Switch is a blurry, tolerable compromise "

" is that Witcher 3 on the Switch looks a lot more like Witcher 2. For starters, its apparent resolution is some of the blurriest we've ever seen on Switch in both docked and portable modes. While the results look comparable to Doom 2016, Witcher 3 is a much slower game, and it demands that you let your eyes linger over massive, dramatically lit landscapes and towns. The blur draped over all of that scenery is more noticeable than, say, a rapid-fire pulse of shotguns through demons' faces."

Those landscapes are covered in foliage, a fact that impressed back in 2015 with CDPR's dense rendering system working nearly as well on console as it did on PC. But that system's polygon count and texture density have both been scaled back dramatically to get trees, shrubs, and other greenery working on Switch. This was probably done to preserve facial detail on pretty much every human character in the game, which is certainly a preferable compromise, but the disconnect between an emotionally brooding Geralt and a dinky, PlayStation 2-era wall of vines is one fans will have to accept if they want to marathon this version of Witcher 3 on the go.

Other major settings like shadow resolution, ground textures, and hair physics have also been scaled back, which you can argue is acceptable or annoying based on your personal preferences. The lower resolution of the Switch screen makes these downgrades a little more tolerable, in my opinion. But enough of the game's geometry has been noticeably de-tuned that it stands out in the game's lengthy, well-written cinema scenes (which, I should note, often struggle in the frame rate department, sometimes dipping into 10-15fps range).

One moment, the game will smother its scenery in some of the most handsome, pre-baked lighting effects you may have ever seen on Switch. The next moment, a tight zoom on Geralt and his allies stutters with texture pop-in and grungy foliage effects nearby. That kind of startling visual contrast shows up in this Switch port more than I expected."

Excellent port, given how much weaker the Switch is. I am stunned they could even port it. Excellent work. Makes me wonder what else could be ported.

I bet with my ear you have not watch the full videos, i can see from how fast you comment since it was just posted, hell even i am not even finish watching it.

It's absolutely amazing port, support this game on Switch please!

Switch owner need to thanks CD Projekt Red , despite on how bad Switch is is in terms of spec t, They still able to bring the games on decent quality and make it (somehow ) playable on Switch although with frame rates going down at 20 to 22 fps.

Biggest technical achievement on Switch according to Digital Foundry, reflections, sun rays, water physics, NPC count it's all in.

YES, IT HAS WET BUTTS —
“The Switcher” is real: Witcher 3 on Switch is a blurry, tolerable compromise "

" is that Witcher 3 on the Switch looks a lot more like Witcher 2. For starters, its apparent resolution is some of the blurriest we've ever seen on Switch in both docked and portable modes. While the results look comparable to Doom 2016, Witcher 3 is a much slower game, and it demands that you let your eyes linger over massive, dramatically lit landscapes and towns. The blur draped over all of that scenery is more noticeable than, say, a rapid-fire pulse of shotguns through demons' faces."

Witcher 3 port is a miracle, even if it's 408p or whatever in portable, still above Doom.

Yes it's a great feet , but with a lot of sacrifice as well. Doom are more stable and The witcher framerates is hardly stable at 30 fps and always drop below 25 fps.

Almost all of Velen, Skellige and Toussaint have no such drops.