Who do you believe will have a stronger defense in 2020?

The Ravens have an incredible rush game. It really does remind me of how they played 10-12 years ago. But man... their QB is just awful. Jackson's stats are just awful. Yeah baker has an INT but he has over 200 yards passing at half.

Mariota has 3 touchdowns by half. Just incredible!

EDIT* I think I jinxed Raven's rush. After having a drive of just shoving the rush down the field and down the Browns throats, they eventually coughed up the ball at Browns 25 yard line. Their first turnover this season. Their passing game is off and now they are fumbling on rush. If I'm a Raven fan, now's the time to worry.

Well that was an...absurdly ugly day on offense for the Patriots. The Bills defense is definitely good, props to them, but Brady and his receivers looked out of sync all day long. I'd assume Buffalo was doing a good job of knocking them off the line on timing routes, because there were a few passes that were just really arrant throws towards nothing in particular (happened at least once on what was a bad grounding call, imo). I'm not sure how injured Edelman still is, Brady barely threw to him. Offensive line wasn't much better and let the Bills get pressure on Brady with 4 man rushes all day long.

Thankfully the Bills' offense was even worse. Five turnovers (4 INTs), and maybe should've been more with two fumbles that they recovered. Defense played well, no doubt, but I don't think they're going to be able to carry us through many more games where our offense totally shits the bed. Bills outgained us nearly 2:1 with Josh Allen and fucking Matt Barkley at QB, and that was with five turnovers. Presumably not many teams are going to be doing that.

We're really going to need to start thinking about a new kicker after this season. Gost has been flat out bad. He's missed a kick every game this year, and leads the league with *FOUR* missed extra points.

At the end of the day, though, I guess I can't complain too much. A win is a win, and we've definitely looked much worse at this point in the year and ultimately been fine.

Wow, I'm going to have like 4 games right this week. Crazy.

Yeah just like I thought quite a few games swung the other way compared to what I picked.

I will say though my Lions showed me enough today for me to believe in their chances in this tough NFC North. This was hands down the toughest game on their schedule and they handily outplayed their opponent only to come up short thanks to two redzone fumbles. Before I would have chalked up games like our road division games and the game vs. Dallas as loses but going forward I don't foresee any game as unwinnable. If we win at Green Bay in two weeks then I'll officially expect to win every game the rest of the season.

Welp, with the Bucs and Saints pulling off the upsets, the Patriots, Chiefs, and...49ers?...really?...are the last unbeaten teams. SF will have a chance to prove how legitimate it is in the next couple of weeks, with games against the Rams and Browns up.

Burfict just needs to be banned permanently from the NFL. What a piece of ****.

NFL.com dropped the Packers four spots in their power rankings, from #5 to #9.

Honestly, I didn't understand why the Packers were listed in the fifth spot a week ago. Must be because they gave the offense credit before it showed even one good game, because other than in-advance credit I can't explain it.

Meaningless fact: NFL.com goes to the length of listing days in German, but the ensuing date is in English. "Donnerstag, September 26th" - That's "26. September", you clowns.

More interesting stuff: I looked up the Packers schedule for the first time this season. It looks... challenging.

At Cowboys - Doesn't sound too bad actually, because the Pack has played better in Dallas than at home in those matchups.
Vs. Lions - An obvious must-win game, but who knows about those Lions this season.
Vs. Raiders - One of the easier games this season.
At Chiefs - The most intriguing game. Does Rodgers still have it in him to keep pace with the new QB star Mahomes?

If the Packers are 6-2 at the halfway mark, that will be pretty good. But I guess after last season I should be happy if they manage 5-3.

At Chargers - Half of the L.A. roster should be on injured reserve at that point, knowing the Chargers' luck.
Vs. Panthers - This is a tricky one. Hard to guess how competent of a team Carolina will be by then.
Week 11 - I am currently 50/50 regarding the Packers' chances to win.
At 49ers - Last year's game in Green Bay was a struggle, and the 49ers were a crap team at that point.
At Giants - This one worries me more than it should. Is it good or bad that Eli won't play?

Vs. Redskins - Washington is in shambles. The Redskins aren't any good either.
Vs. Bears - Super important game.
At Vikings - Same as above.
At Lions - Closing out the season with three divisional games, two of them on the road.

The Packers are good enough to finish 10-6 or better. At least I hope so. But with all those NFC North bouts at the end and the current standings, everything's possible from winning the division to missing the playoffs on that final stretch. 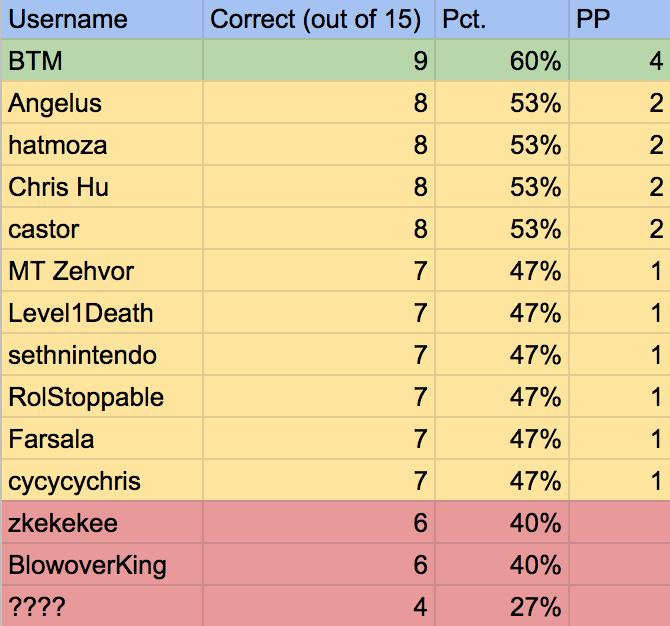 Something of a down week overall, but I guess we were overdue for one. Fuck me for having any degree of faith in the Redskins, dammit. Zkekekee or however you spell that is Zakaro, who's just fucking with me on the name section I guess.

One user without a name who filled out the sheet before I corrected the lack of a name place. I...think this was Chrkeller? He was the only one of our non-usual predictors in there. Assuming it is, here are the standings to this point in the season. 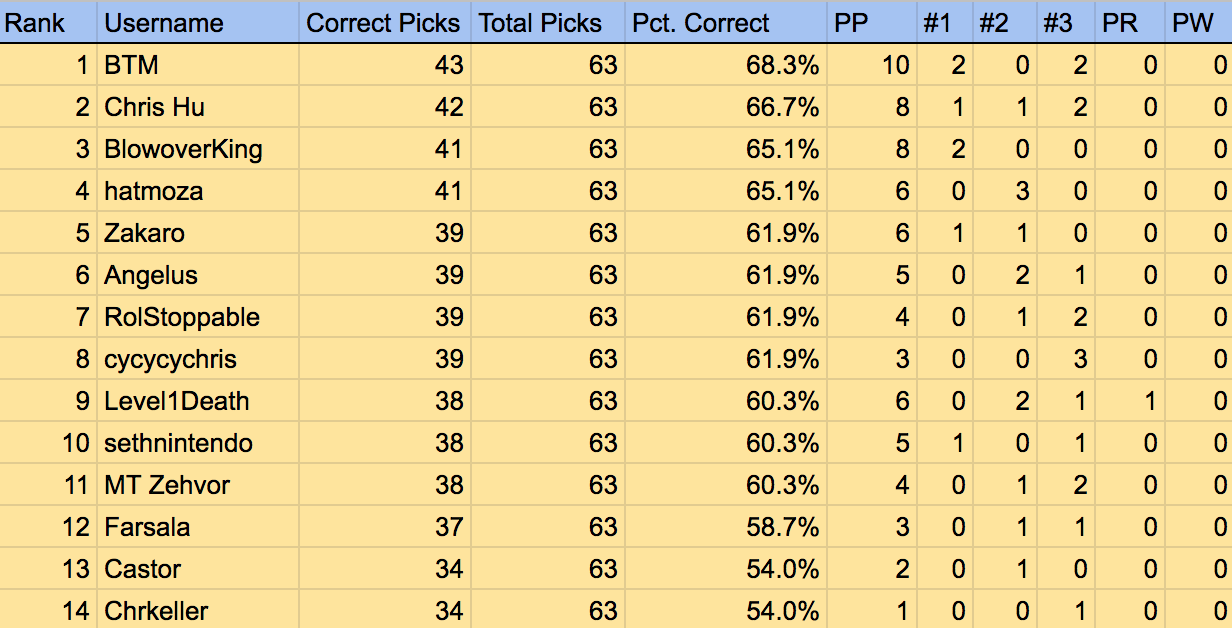 Picks for this week coming soon...with a name section this time, I promise.

Tragic week. Nice to know everyone was way off though

Did I really get only 7 right? I thought it was 8.

Did I really pick any one between the Vikings, Cowboys and Bengals, or where else did I make a different pick than I remember?