they're quite nice and rather cheap now considering that a year or so ago a 400gb card was well over 100dollars, I would just advise you also buy a USB3.0 SD card reader with a decent rating on amazon if you're going with this card because you'll probably want to shift over all the games you have on your current micro SD card and then build on top of it and you can just copy paste the entire SD card directory from the card you have onto a folder on your PC and then from there onto the new card with no issues (in my experience)

If you haven't changed the SD card in your Switch before the one thing you should know is that you don't have to worry about your save files for the games, they're all stored in the Switch storage itself, so even if you completely fuck up transferring files or if you're too lazy to bring over the old cards games all you will be losing is the game files and the pics / videos that you've captured in games, those are likely to be stored on the SD card if you took more than 1k screenshots as that is all the base unit can store of pics before going to SD card for them.

I'm off to bed though, if there's anything else you're asking regarding shifting SD card on the Switch I'll check back in tomorrow and see if I can help more. :)

It was one of those I used to shift my old SD card contents to the PC then onto the 400GB card.

Ugreen do some nice small little things which the Switch works well with, they've got a USB Lan adapter as well that costs around 10e and works great to get a wired connection with the Switch when it's in dock or with a USBC to full USB adapter you can even use Wired ethernet while playing in handheld mode.

I also have that same 400GB Sandisk MicroSD card inside my Switch, and it works perfectly fine. My own benchmark shows a 95MB read and over 50MB write, which means it’s more than enough for Switch’s internal SD reader. So don’t overspend by purchasing the Extreme/Pro/Elite variants of these MicroSD cards as your Switch’s bus reader cannot take advantage of of the extra performance provided by those higher-end Micro SD cards.

Do realise though that this same card was priced at less than $45 in the US around less than a month ago during Prime Day, and I suspect it will go even lower during Blackfriday week in the US. So if you’re not in rush, then I’d say it might be better to wait until then.

I'm pretty sure it's not really a lie. There's a reason why the SD cards never give you as much space as advertised, but it's a technicality I don't really understand either, I just accept it. But yeah, there is no SD card in the world that's going to give you as much storage as it says on the box, they only ever come somewhat close to it.

That said, I also vouch for that 400GB SanDisk card everyone else talked about. I don't own it, but the one I currently have is also SanDisk and it works pretty well - it's 128GB, of which I get 119GB, or about 93% of the advertised storage. I've been wanting to upgrade for a while, and almost took the plunge for that 400GB one recently, but my wallet is very tight this month so I'll save it for a later date.

First of all, I found on Amazon plenty of real knockoffs and fakes. If you get a 512GB SD-card for 20 Euro (so maybe around 25 Dollar) you should not trust in it. It is very easy to produce a card that has about 100MB or so but the controller advertises 500 GB (so that is shown in the Operation System), but in reality saves your stuff over and over in the memory.

But what you talk about are the prefixes. SI defines prefixes like Kilo ( k ), Mega (M) and so on. But Byte is no SI-unit. So in early computing the SI-prefixes were used, but instead of 1000 for Kilo for instance, it uses the power of two that is close, namely 1024. To avoid confusion, the IEC (International Electrotechnical Commission) proposed to add a bi to the first syllable of the prefix-name (for binary), so Kibibyte (KiB) or Mebibyte (MiB). Anyways, if operation systems show you MB or GB, they usually mean MiB or GiB. But producers of mass storage quickly realized they aren't technical lying, if the use MB and GB as SI defined it. The difference can be quite big.

I wouldn't recommend using more than one microSD-card in the Switch. 2 x 200 GB aren't cheaper than 1 x 400 GB. And even if they were slightly cheaper on sale, you have to completely power down the Switch to change them, standby ain't good enough. Updates and DLCs for your cartridge games could also be on the wrong card or you have to download them to both cards.

Normally not those which you buy from Amazon themselves, unless someone "returned" it with keeping the new chip and putting his old, smaller SD card inside. But traders on Amazon? All the fucking time, hence why I would never buy anything like that from them.

If you want to be sure, better buy them at an online computer store instead of Amazon, problem solved.

Good deal in Germany for that card: 44 € (taxes and shipping included) 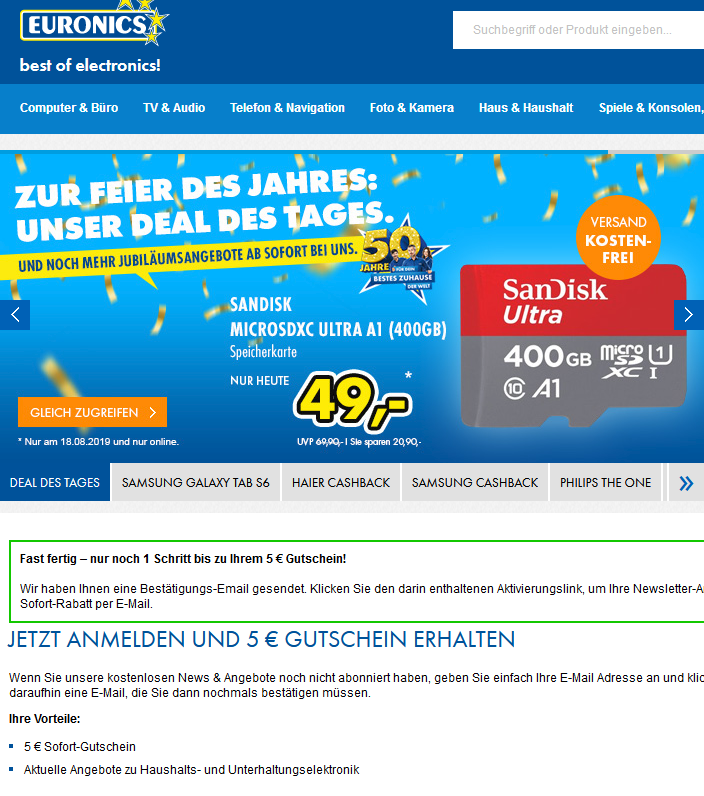