If you ever reached 5% you will get it I think.

Oh, so I will automatically get every GP ones?

You sure it's the new skin and not the one from last GP? Shouldn't unlock until the GP has ended.

Yeah I have the decal aswell.

So its literally zero reason to finish in the top 5% this time then. Kind of a relief actually. 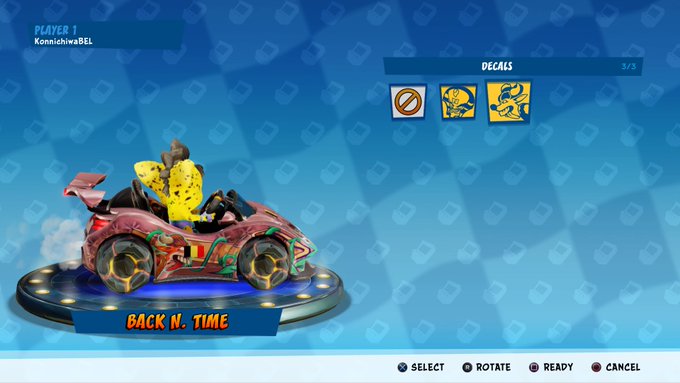 Sticker ruins it but yeah unlocked it.

I think it's a great game, I just don't understand why everyone feels the need to defend immoral shit that companies do, and act like it affects the game for no one. You giving whataboutism examples from Nintendo changes nothing. All I wanted was a graphical update to the original game, not a stupid grind added on. And just because you enjoy something doesn't mean I shouldn't criticize it. You're basically saying "well I'm not bothered by it, so you shouldn't be either." Just because you've adjusted to the corporate bullshit these companies are doing doesn't make any of it right.

We are hardly defending it, I was even the one posting first about the Wumpa coins MTX.  If you go back to the moment of the announcement of CTR you only see joy and happiness and the months after they announced characters from CNK will be included and the CTR community was amazed and thankfull, than they announced that they will also put the tracks from CNK and the CTR community exploded from joy and best of all the game will be 40$!, then we got the skins/customizing options and again the CTR community was basically amazed how great the initial package is, implementing Wumpa coins does not really change how people feel about the initial package.

With the grand prix stuff that is kind of huge in content and making this game potentially one of the biggest or the biggest Kart racing game ever, and if you ask me, do I want to earn it for free or pay for it season pass wise or battle pass wise? I will tell you I prefer to earn it. Ofcourse if I had to grind 8 hours for a character I would have been pissed but getting all the content was rather easy and fun. I unlocked 30+ items in less than 8 hours of play in this grand prix or 3 items a hour....

It boggles my mind that people would have been fine with a 20$ season pass that would have earned Activision way more money than the MTX ever will do.

Following the devs I saw they were incredible happy that they were chosen to make the remake, some of them were huge CTR fans and felt lucky they may make the remake, it was their iniative to not only make the game but also add those extra's in the game like the CNK characters/CNK tracks. You can also feel the love that they put in the next tracks, they talked about how Fake crash does not really much have an identity and they want to create some lore, so basically the idea of 'what if Fake crash defeats N'trophy steals his staf and instead of going to a certain time period breaks it instead and creates a fecked up world and that is how we got prehistoric playground'   The fact that the MTX are still not in the game also poins to me that Beenox didn't wanted to add the wumpa coins MTX but that order must have come from Activision and Beenox does not deserve the hate and I can only imagine how hard it must be for them while all the hate should directly go to Activision. It is even worse if people buy wumpa coins all that money will go straight to Activision and the beenox devs will just get their montly paychecks.

I have played so many games that have unlockables that you can only buy who don't get the hate, I prefered that I could earn the dlc weapons in FFXV instead of buying them. I wished that I could earn some of the costumes dlc in the Tales games instead of buying them.  I wish I could play with some DLC characters instead of buying them in fighting games. I wished I could play DLC adventures without buying them in adventure/(j)RPG games. And I honestly feel like each of those games does it worse than CTR who just let you earn it, it also feels fun to come back to the game and have more stuff to unlock and their is sure a possibility in the future that I don't want to play the game anymore or not care about unlocking the new stuff.   So if I never went into a FFXV/Tales etc thread complaing or hating about the unlockables only being purchasable why do you expect me it from me in this thread?

All I wanted was the original game with all of the original content updated for a new generation. I got that and then some. Whatever else they do beyond that doesn't bother me.

I do admit that some of the extra content does look enticing... But I'm not buying. And I gave up grinding pretty quickly. Early on I accepted that I wasn't the type of gamer to chase after those coins. If only we could have earned them offline (Switch owner here), I'd be more open to it.