Forums - Gaming Discussion - Anyone else feel resolution is overrated?

It depends on the platform and game. GTAIV ran poorly and still does on X1 BC. That's likely because its poorly optimized on CPU. GTAV was above average in performance, it stays pretty close to 30 fps while significant dips can be during driving and action. But that was par for the course on last gen.

In AC games you might see NPCs pop in fairly close, but they could also be seen from a great distances. You're exaggerating to make a point and ignore they were always raising the bar on visuals which is GPU heavy. These game also run better on 360 than you suggest, a lot of open world games performed better on 360. Many 360 games perform better on X1 BC because the bottleneck was on GPU. Meanwhile the game heavy on CPU still struggle. So Crysis 1 still runs bad while Far Cry 3 is a rock solid 30 fps.

Lastly, later 360 games actually required a HDD or USB memory sticks because external storage seemed to be used to give a memory boost, helped for streaming data quickly, etc. That suggest there was a bigger issue loading data quickly off a disc than just RAM limitations. Some games actually ran worse if you installed it on a HDD because it was using the HDD for cache, GTAIV was one of those games.

360 was a better fit for those games because it had more RAM available to games than the PS3. Its OS used less and it was one big unified pool compared to the PS3 which loses more to its OS and could only use half for graphics and the other half for everything else. So the 360's advantage there came in no small part from memory superiority.

And Far Cry 3 on last gen is far from a rock solid 30fps, it runs very poorly when traversing detailed areas, again in large part due to aggressive streaming necessitated by severe memory limits.

But are veering pretty far off topic here, so to bring it back to resolution, last gen also offers a good example of the actual topic; let's look at 1080p games on last gen vs 720p games. The former may look crisper, but at the cost of vastly less detail and lustre. 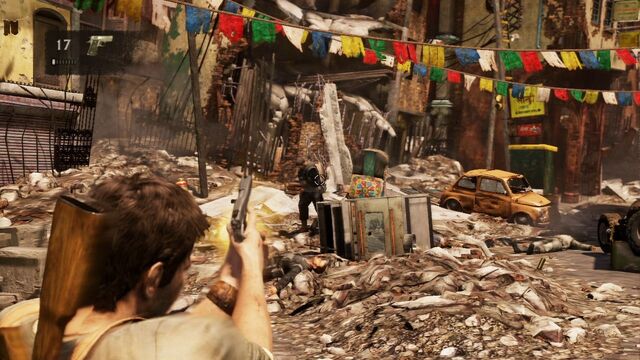 The 360 had a memory advantage, it was often lead platform, it was easier to develop for, it could stream data off a disc faster, the general consensus is it had a GPU edge, etc. The 360 had numerous advantages before we focus on memory. However, the PS3 did have very impressive 1st party games, more polished looking 1st party games and performed better with Frostbite games like Battlefield (seemingly games that demand heavy use of memory).

Far Cry 3 ran terrible on 7th gen consoles. The frame rate struggled with little happening and also aggressive screen tear. I'm saying its a rock solid 30 fps on Xbox BC because the bottleneck was on GPU. Little proof the game struggled because of memory limitations.

Your picture comparison is silly. 360 and PS3 didn't have the GPU power to push high quality graphics of the time at 1080p. They more often went below 720p versus achieving 1080p. Your argument could be made about modern consoles as well. They often sacrifice performance and graphics settings to achieve a higher resolutions. It one of my current gripes with the mid gen upgrades.

I see marketing departments rubbing their hands over ther successful marketing campaing starting to count the horizontal pixels instead of the vertical.

RAM limitations become CPU limitations, because it's the CPU that has to manage the aggressive streaming and decompression of data that a tiny amount of RAM necessitates. Ask any dev who worked on PS3/360 whether RAM or GPU was the bigger bottleneck, they will all tell you it was RAM.

As for the last paragraph: that's my point.

I just remembered the 360 and PS3 had some 60 fps open world games. Burnout Paradise, Rage and Driver SF. Strange the tiny memory available didn't obliterate the performance of these games.

Again, you keep blaming RAM limitations but the bigger issue was often GPU limitations and optimization.

Because Burnout and Driver were simplistic with basic and repeated assets. And Rage was not open world at all.

You are simply incorrect here. Again, in 2008 their GPUs were still quite decent, but even by then less than 500MB of RAM for games was a joke.

Many games use repeated assets, Rage actually boasted about not doing that. But it did have unusual texture pop in kinda like a UE3 game. Rage is indeed an open world game.

500MB was fine for 7th gen games because it wasn't running Windows and the games were simply more efficient. It was also running textures at around low/medium quality compared to what PC was doing. VRAM at that time was probably 256-512mb.

Full circle by the way, the biggest asset drain is textures and that's exactly where 7th gen cut corners. They often used low quality textures or sometimes higher quality textures popped in depending on the game and engine. Crossgen (7th and 8th gen) games suffered from some of the worst quality or severe texture pop in.

Eh, I've played Rage and I certainly wouldn't call it open world; more like a series of hubs and linear levels connected by corridors. That's a whole other topic though.

To tie back into resolution, both last gen console seemed pretty comfortable delivering (for the time) great visuals at 720p, but this gen I'd peg the sweet spot for the Switch at more like 900p rather than 1080. Even the base Xbox One seems to do its prettiest graphics at around 900p, with games like Battlefront 1 & 2, Ryse, and RDR2.

I do believe Skyrim did that to an extent as well. I mean you had the open world but going into cities, buildings or caverns took you out of that open world and had a load screen. There isn't a debate about that being an open world. Rage had an open world and areas you would enter that were essentially like a linear action game.

Switch is really a mixed bag of resolutions. If its a technically demanding game, its often doing 720p and sometimes lower for dynamic resolutions. But on average its certainly hitting resolution well above last gen.