"Scientists have been puzzling over Oumuamua ever since the mysterious space object was observed tumbling past the sunin late 2017. Given its high speed and its unusual trajectory, the reddish, stadium-sized whatever-it-is had clearly come from outside our solar system. But its flattened, elongated shape and the way it accelerated on its way through the solar system set it apart from conventional asteroids and comets.

Now a pair of Harvard researchers are raising the possibility that Oumuamua is an alien spacecraft. As they say in a paper to be published Nov. 12 in The Astrophysical Journal Letters, the object "may be a fully operational probe sent intentionally to Earth vicinity by an alien civilization."

The researchers aren't claiming outright that aliens sent Oumuamua. But after a careful mathematical analysis of the way the interstellar object sped up as it shot past the sun, they say Oumuamua could be a spacecraft pushed through space by light falling on its surface — or, as they put it in the paper, a "lightsail of artificial origin." "

Pretty interesting stuff. Definitely going to check out their results when they are released in a few days. But if it is alien controlled from another universe it would mean that they have been able to control it for probably hundreds of years for it to have gotten so close. If true they're probably far ahead of us technologically.

Some rocky science. And am eatin a muffin right at this moment.

Why would it look like a rock? And if it was sent, why wasn't it closer? Might as well claim that God put it there. If it actually was aliens it's quite likely that it wasn't sent specifically for us.

Here is a lot more information. It accelerated when it got close to the sun and then decelerated. Seems like a natural phenomenon of being pushed by strong radiation from the sun.

It entered the solar system at a speed of around 23km/s. That's painfully slow to actually travel through space and bridge any kind of distance in a reasonable amount of time. You need hundreds of years to get through the solar system at that speed let alone get to it from somewhere else.

That's were it certainly falls apart. At 23 k./s it takes 57 thousand years to come from the nearest star. Those must be some patient aliens. Perhaps they're Kuiper belt aliens :)

Maybe... the aliens like to disguise themselves, their buildings and space ships as rocks. According to some Mars is full of them. Maybe they re already amongst us? The rock right beside you, beneath your feet.. of alien origin and you dont even know... until it is to late...

Scientists can be retards too

Was it this guy? 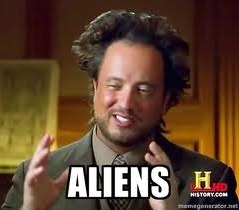 Errr..  If it really was an spaceship, what makes you think this would be its top speed? I mean, I'm not saying that it was indeed an spaceship. But if it was, then I think it is safe to assume that it would be able to accelerate and decelerate at will.