So Nick Foles is starting for the Eagles on Thursday, just in case that affects anyone's predictions.

I forgot the draft time so i was only there for the final pick . ( 0-0) but pretty happy with it anyways

Yeah, you'll probably be all right. The only thing autodraft really changes is missing out on some of the #2/#3 WRs that are available after like round 6 or so.

All I know is the green bay packers are screwed.

I'm going with the Steelers winning the Superbowl. I think they have all the pieces, including a solid defense. Not many teams are as complete. The Vikings might reach that level but it will take time. The Rams are close, though a real number one at receiver would do wonders for them.

On paper, the Steelers are certainly a reasonable pick (although I really have to question that supposedly solid defense). In reality, however, the Steelers are far too often a bumbling mess that lacks leadership and pisses away games that they had no business losing. This team has had all the talent in the world for years now, and yet Mike Tomlin and his staff cannot consistently get them to win games they should win, which usually means having to take a tougher road in the playoffs (and potentially getting knocked out of the playoffs by a worse team altogether).

I don't think anything illustrates the sheer level of incompetency that encompasses this team more than the game against the Patriots last year. Jesse James catches what would be the game winning TD, it goes to review. Does Mike Tomlin/Todd Haley/literally anyone on the sideline take the time to figure out what play they're going to run if the TD gets overturned? You bet your $25 million Le'Veon Bell holdout they don't. Instead they run an absolute beauty of a play where two receivers don't even realize they're supposed to be running routes and Roethlisberger throws it into fucking quadruple coverage.

We had our draft in my fantasy league yesterday, I think I picked up a pretty good team. Anyone wanna share any thoughts or feedback on my current lineup? 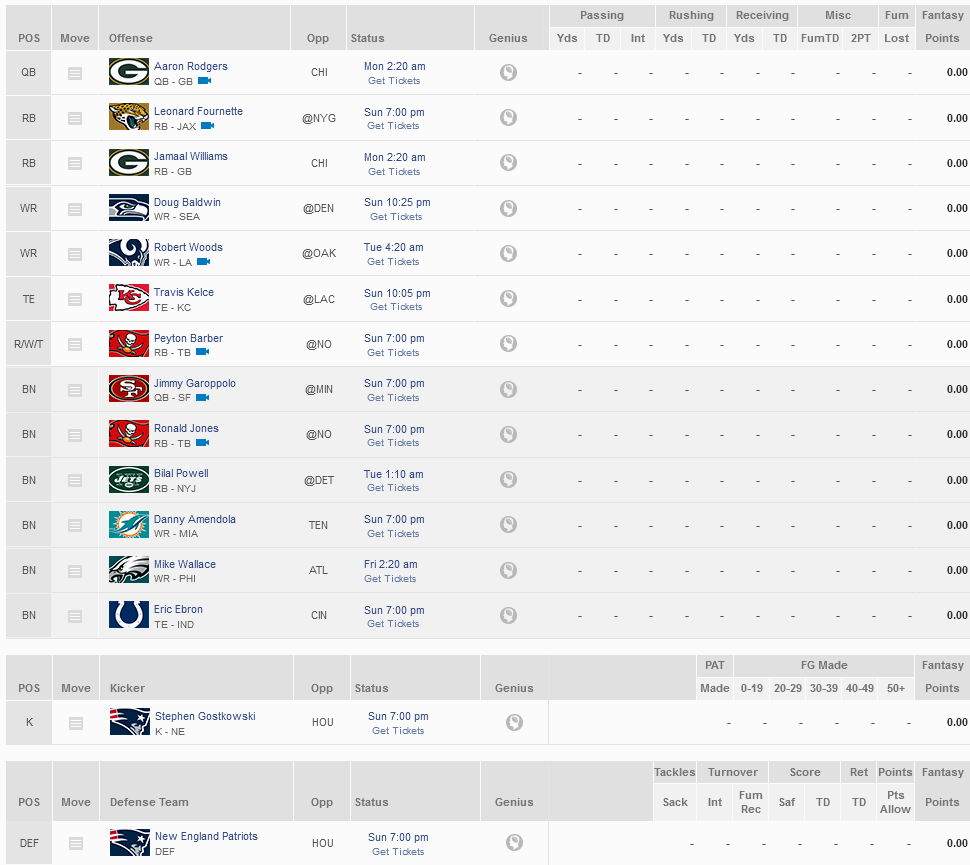 You're not wrong but that kind of thing doesn't happen most of the time.  It might cost them a game or it might not.  There are also other teams that are just as poor in that department, oddly enough.

How many teams in your league?  It looks good, though I feel like a Packer's RB is always a big gamble.  I like that you have both Tampa RBs.