I remember the first game being really amazing when I played it, so yeah, really excited for this one.

Well either you found a bug, or there was a half foot distance between getting shot, and not getting shot. Those turrets may have a specific angle of attack, so if you move just a foot closer to the wall, or your character is a bit shorter you might fall outside of their range. This would be due to the turrets only being able to swivel down so far, before aiming at nothing but the brick below them.

If you only use four characters you won't get units to fire in tandem. When two characters like each other they will both fire, whenever their nearby friend fires. Also, you won't get as much suppressive fire on enemy turns by having a single unit in one spot. Keep in mind, this is the tutorial, and there are much harder scenarios in the finalized game. Try getting through the snow level with a squad of four, in four turns.

Playing through the tutorial, I think I am liking this. Getting it is another matter entirely though, but I like it.

Loved VC1 and ended up being one of my fav games for that gen. so far I’m really enjoying VC4 demo and it must be the start of the main game as you can carry over the demo save to the main game when bought. It’s good to see the game has great characters again which was a major strength in n the other VC games especially VC1.

I finished the demo, including the special Demo only mission that you unlock after beating the story chapters. And I really enjoyed the demo. I'm thinking about getting this game on launch, because the first game was probably my favorite rpg of the previous generation.

It seems like A rank is now the highest rank though? 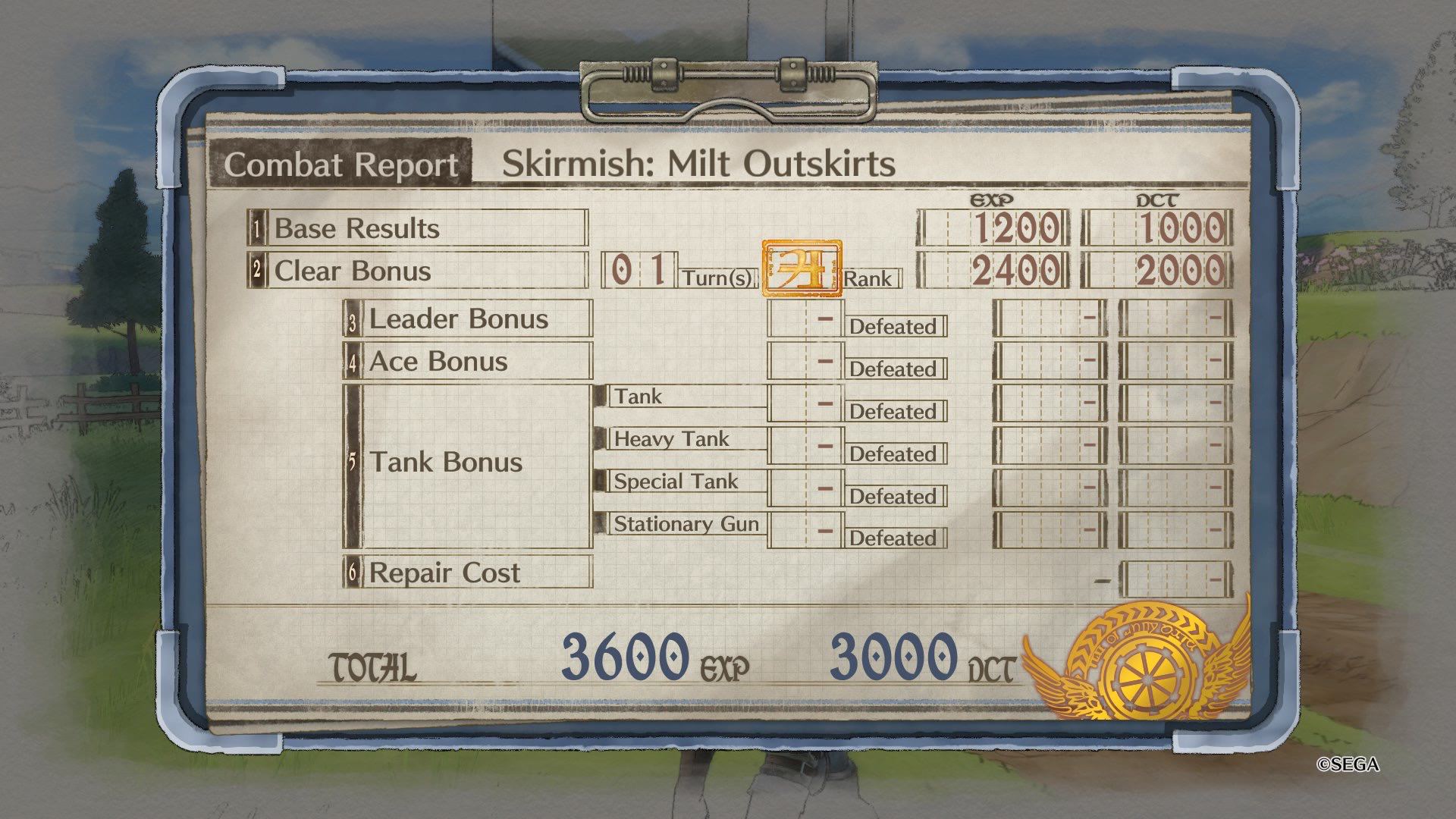 I'm pretty sure there was S rank in the first game.

I was also surprised that tanks only cost 1 CP now rather than 2. I wonder if anything about the tank was nerfed to make up for that?
And the new Granadier class seems really good. Perhaps too good. I hope that's not the case.

If you had happened to record that situation it would be interesting to see, since it's not easy to determine what happened (assuming it wasn't a glitch) without knowing everyone's position, actions and the direction they're facing, etc.
But I'll try given what you said, and what I know from the original game and the demo.

Regarding sight lines, there is a line that (sort of) indicates when an enemy unit is within striking range. But because objects can obstruct their view, and they're not always looking at you, it's not so much the range, but more like 'when they're capable of attacking you'. And that's the red sight line. 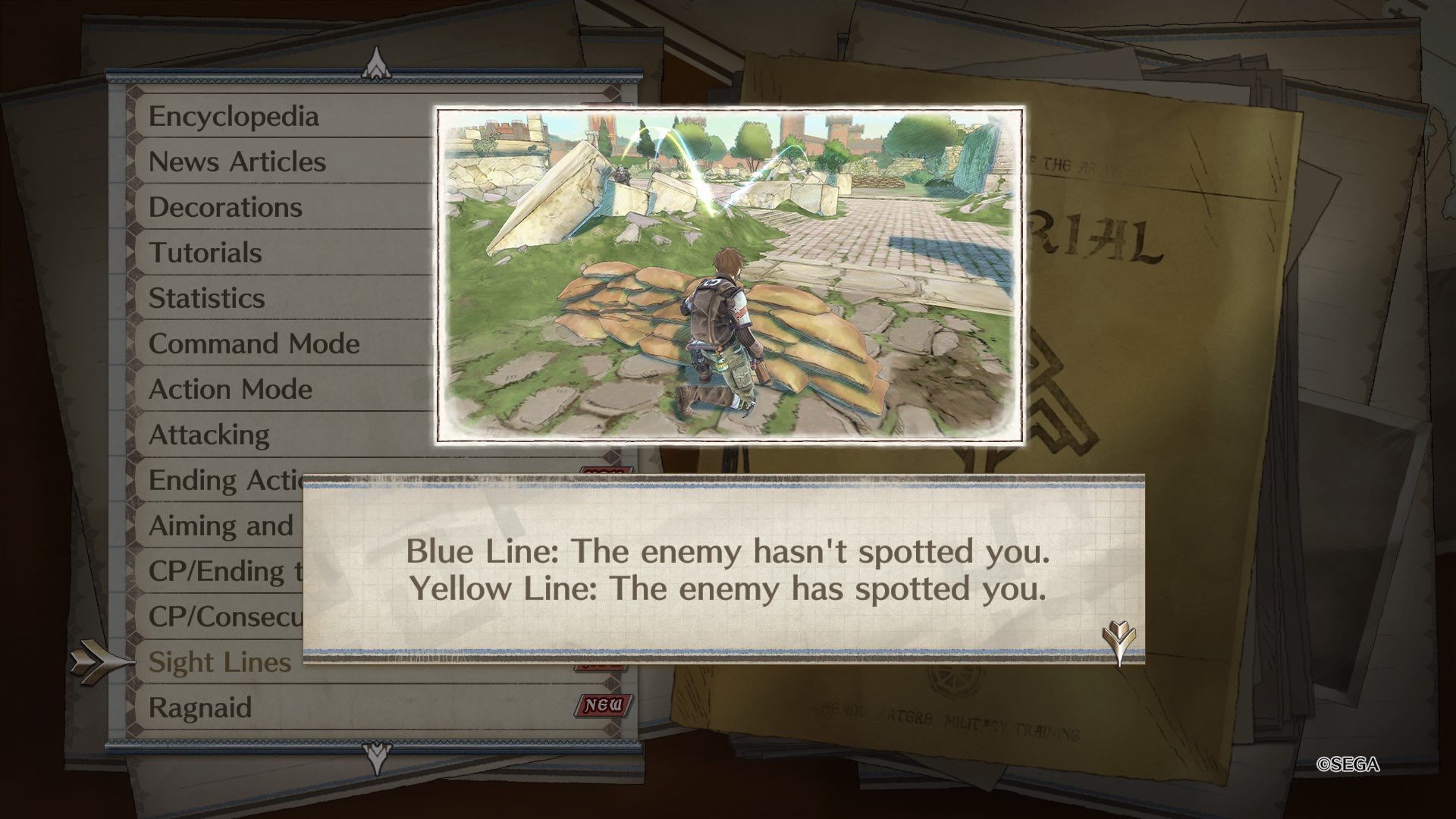 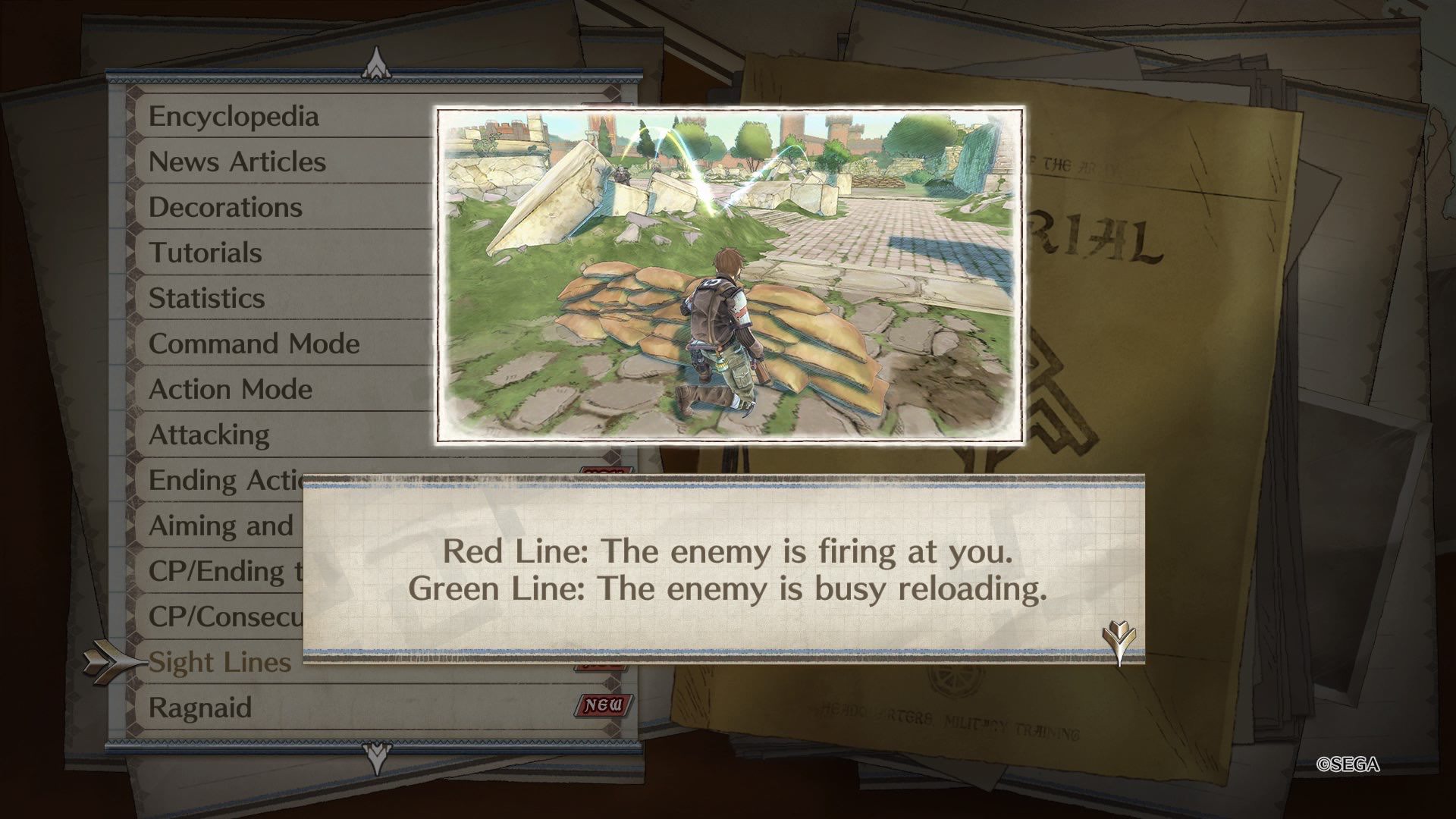 But as soon as it turns red, they've already begun attaking you.
This is because, from my experience, they will always begin attacking you whenever they can, once you're within a certain range and they are looking at you. If they're reloading, they can't attack you for the time being, and the line will turn green. I don't think turrets need to reload though, so that's probably not what happened to you.

Without knowing how everyone was positioned, my guess is that you happened to be just out of range from being shot (a millimeter can make the difference between yellow and red), and the line of sight can change if the enemy soldier re positions himself or his aim, such as after turning his position a bit when firing at you the previous time you ran past him. He will not (or should not) reset his position back to where it previously was, but rather still face the direction he was previously looking/shooting towards. You can use this strategy of drawing an enemy unit's attention to make them face the wrong direction, so that your other units can sneak by undetected.
However, I don't think turrets have too much space to work with when it comes to adjusting their aim and line of sight compared to foot soldiers. But there should be some.

There may also be an exception to enemies needing to see you in order to fire at you for the new Grenadier class. Because it was explained in the tutorial that a Grenadier can target any enemy unit, as long as anyone on your team is currently seeing them. (Good idea to put a sniper up on a tower for those situations.) The same may apply for enemy Grenadiers, in which case there wouldn't necessarily be a red line, or even a yellow line, coming from them while they're bombarding you. Though I haven't tested this out yet.

~Edit~
I checked a video I uploaded, and during that fight I was bombarded by a Grenadier unit while all the sight lines were yellow. But once I got closer to a Grenadier unit and it could see me, a red line appeared from it as it was attacking me. 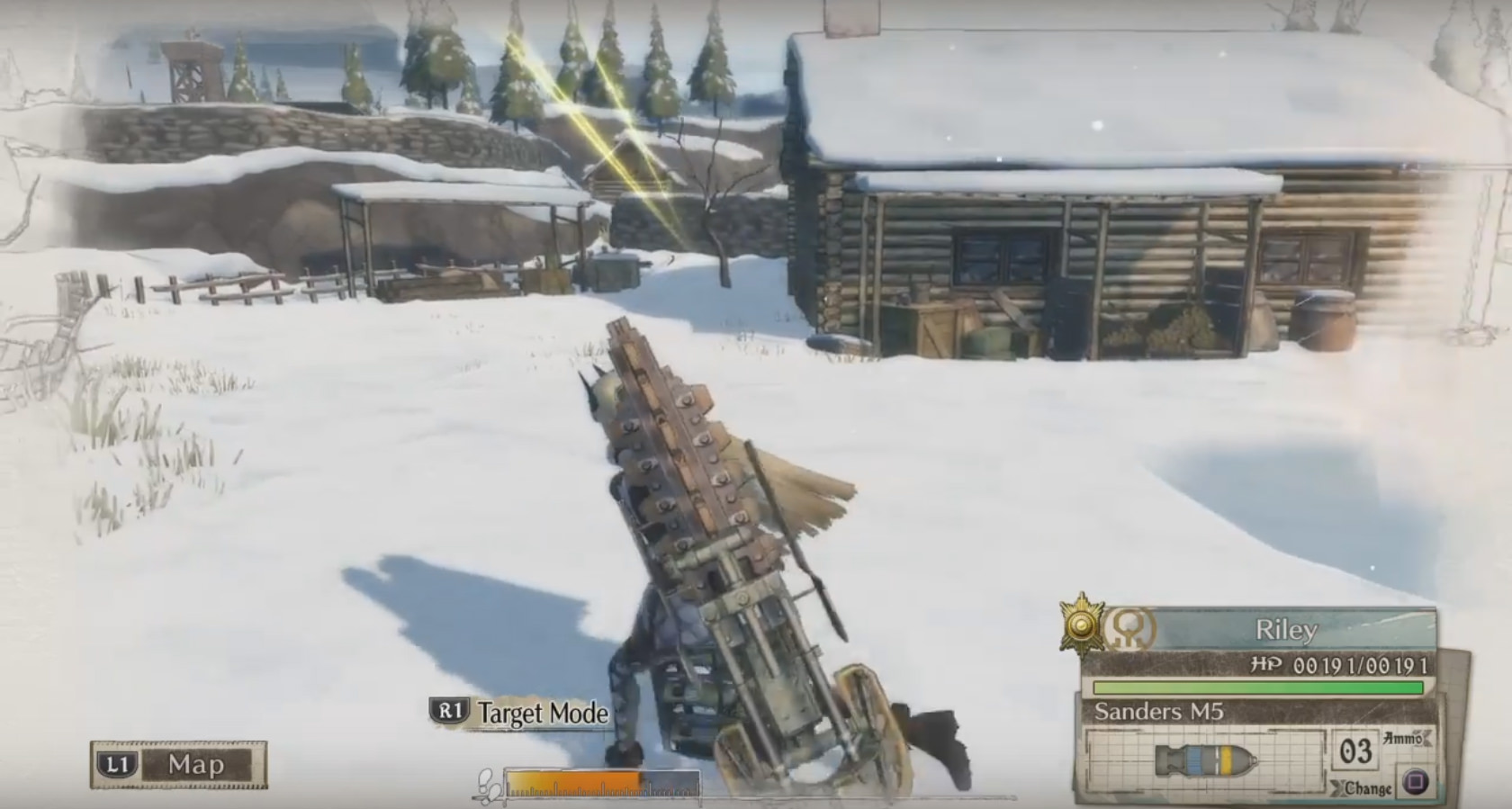 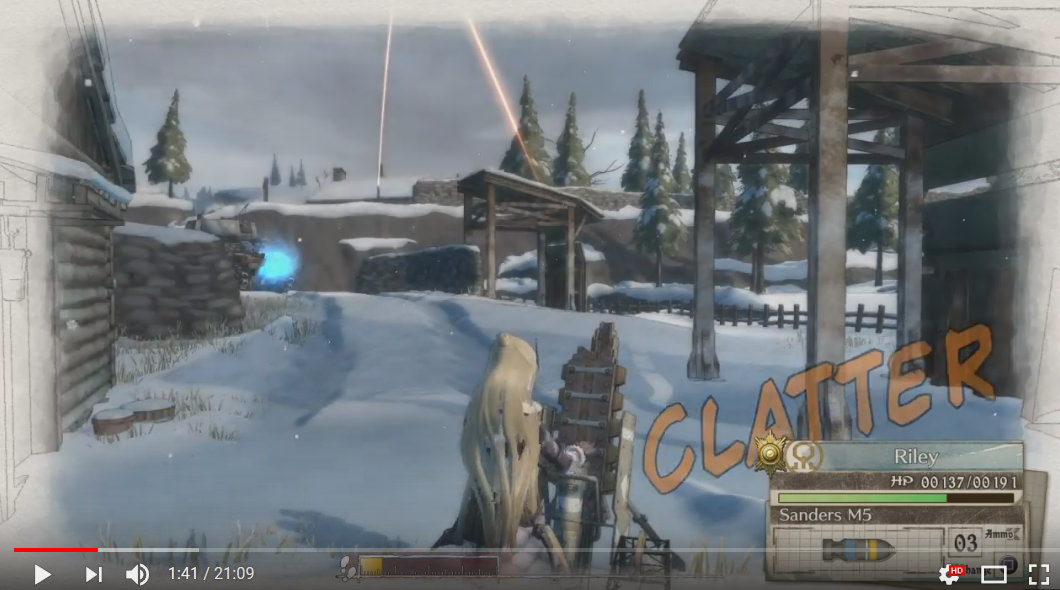 I went around the right side of the house seen in the first image.
If it was that same Grenadier that bombarded me the whole time, and that seems to be the case, then that means he was doing so without any sight lines coming from him. He was relying on one of the yellow sight lines coming from one of his allies.
So this is an interesting factor that to my recollection wasn't present in the first game. It gives more importance to taking out snipers up on the lookout towers first, to 'blind' the grenadiers while you're on certain parts of the field that they normally can't view from their own position. I didn't do this, and got hit by grenades multiple times while making my way up to the Grenadier.
Interesting that there seemingly was a solution to that situation. I'll try doing that next time I play this stage.

Regarding making use of every unit or not, it just depends on the situation. For example, you don't have to deploy every single unit you can possibly deploy, which can also be to your advantage.
For example, you can keep certain slower or weaker units out of the battle initially, until you've captured an enemy outpost, and then summon them to that outpost without having to waste a turn, or CP (if they were outside of your basecamp) having them retreat.
I often leave at least one spot open so that I can summon someone as fast as possible to a newly captured basecamp.

Making use of the whole team, or most of them, can be very effective for defense, as someone else mentioned. Even offensively.
If it looks like a certain area is heavily guarded, rather than going in you can position your units so that they will intercept the enemy coming out of there. New for this game is that every type of unit is able to provide interception fire during the enemy phaze. Not just units with infinite ammo. But beware. This means they will (apparently) waste bullets when doing so. So keep that in mind.
The more units you have to position, the greater range they'll cover during the enemy's phaze.

And while it wasn't necessary to use all units during any particular phaze in the demo, in the previous game there were situations where your basecamp would get ambushed by surprise enemy reinforcements from behind. And since losing your basecamp is still one of the conditions for failure in this game, I expect it will happen at some points in this game as well.
In those situations it'll be important to have a team stay behind and guarding the base, while the others are advancing through the stage.

Played the demo, like it very much and it's on my to-buy-list. But I doubt I'll get it at release, probably more down the road during a sale.

No 2 was a sequel. Great game, I've beaten it and highly recommend it. 3 I believe was a prequel. They are not side stories. If anything 4 is a side story. It takes place during the events of the first game. The demo for 4 is amazing though.