Consequences of Sound- 91- Ron Howard delivers the most entertaining Star Wars film since the Reagan era.

Critics not liking Solo as much as The Last Jedi might not mean that it's a worse movie, in fact it might even be a good thing, because in my experience often it is the movies the critics don't like as much that end up being the biggest hits with general audiences.

Edit: oh right, we have subscription function now... Will keep that in mind next time.

A lot of that is down to the film being review bombed. Imdb is a bit more indicative of what audiences actually thought.

TLJ turned me off from Star Wars completely, so I had little expectations of this and most likely wont see it. Good or bad review scores don't signal what a movie is to me, so I would say to the people who are going to just keep an open mind.

Does not mean much 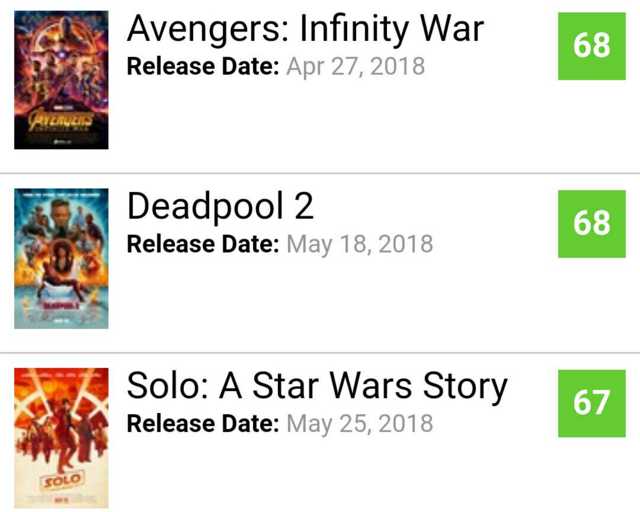 Also this. 90% of decent blockbusters these days just get the same scores, because critics can't be bothered to actually give them a fair and proper rating - except when they have some political message, such as Black Panther or The Last Jedi, in which case they're instantly amazing.

To be fair, both The Last Jedi and Black Panther had stellar cinematography, but shouldn't be the only determining factor for how good a movie is and it certainly isn't for critics because many movies with great cinematography have much lower scores. Personally, one of these two is among my favorite ever films, and the other is one of the worst I've seen in recent memory, so... yeah, movie critics just don't matter at all.

I'd say if a movie has a metacritic below 50 or 55 at most, yeah, it's probably bad and I'd rather avoid it. But anything above 60 has the potential to be awful, average, good or amazing.

Edit: moreso, when it comes to Disney Star Wars films, the critic and fan reception has been inversely proportional. Critics say TLJ > TFA > RO, whereas fans say the exact opposite, myself included.

Not for me. This is actually a higher score than I was expecting from critics, bearing in mind that the critics loved episode 8 which I personally hated. In my experience, often it is the movies the critics don't like as much that I do like.

Also, the reviews for Solo are almost the same as they were for Rogue One, which I personally liked alot.