Forums - Microsoft Discussion - I used to be an Xbox hater

Gaming hardware i still have some love for is older stuff and i'm pretty much nostalgic there, but i'm usually more into the games side.
What i really like on the more hardware/OS side is stuff like spatial audio, backwards compatibility and all the other nice stuff Xbox has right now and PlayStation should have.
But in the end i love, or don't love, games.

I can relate. I hated Sega with a burning passion and then one day, I bought a Dreamcast because I couldn't find a PS2. I fell in love, instantly.

Same thing with Microsoft. I despised the original Xbox because...reasons. Then I grabbed an Xbox 360 after weeks of not being able to get a PS3. Again, I fell in love.

I was never really into the console wars myself, yeah we'd talk about it but when it came to playing the games we'd do it on whichever console.

You really owe it to yourself to get MCC. Halo 3 bigteam is syill a blast.

I started out as a Playstation hater because I blamed them for Sega's failure in the market. But it's so unnecessary to hate on any of these hardware makers, we all get a lot of fun out of them and can choose whichever console that suits us best.

I don't hate MS, they're just always my third choice between Sony, Nintendo, and them. And i only have room for 2 consoles each gen. The biggest reason that the original Xbox, was the last one that i owned.

I blame 3rd gen console wars It started with Nintendo mocking Atari I believed but unsure . But it was real when they Nintendo said they were better than everyone in 3rd gen I owned an NES then but wanted Nintendo to be humbled .That time I wanted anybody to take down Nintendo .Sega became popular in 4th gen but Nintendo won that gen too and I owned both SNES and GENESIS/Megadrive So fell in love with Nintendo too somewhere in 4th gen then Sony happened in 5th gen I wanted Nintendo to win again But I tried the PS1 immediately fell in love then Xbox happened though I don't know why It took me longer to love Xbox?

I'm pretty sure that the first game I played on the original X Box was NFL Fever 2002 over one of my friends house. But I never bought the game once I bought my own console. The first game I had for it was Dead or Alive 3 since it was bundled with the console.

The picture below is same game 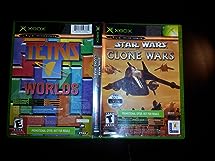 Im glad you came to your senses OP. The games that are offered by all systems make it the best time to be a gamer. I dont understand the hate for a company while loyal to a company with the same goals. To me it shows a bit of mental disability on their part, or maybe some of its cool to hate on things on the internet, I dont know, and dont really care, I just ignore them and keep enjoying all the games the industry offers.

I also fell in love with xbox when i played halo for the first time, I was so impressed with it I went up to Blockbuster Video at midnight as it was the only thing open then, and bought an xbox console with halo. My friends and I also stayed up until early morning hours playing split screen multiplayer, we had many good times with that system, starting my love of that series as well as the xbox which before I could have cared less for as I had a PS2 and gamecube at the time.