What res are you at now?

Why would manufacturers invest in a resolution with no percievable gain? And why would consumers purchase TVs with a resolution that leads to no percievable gains? I think they will invest in ultra HDR (if it's a significant improvement) and better image quality. There's a reason we never had HD audio CDs, humans couldn't tell the difference between them and regular CD quality.

People constantly buy things they don't need. Even educated consumers buy useless shit because it has bigger numbers at the end. That's how consumerism works. And as long as there are enough idiots buying it, manufacturers will produce it.

There are too many examples to count but remember when cameras in phones had ever more Megapixels? Absolutely useless but the higher the count, the more consumers bought it. The same with RAM in prebuilt PCs or GPUs.

Fair point, there is a reason that mobile games make so much money.
People sure do love their increasing numbers.

16K is only relevant for VR. Ofcourse the human eye can only resolve that much detail in a 2 degree fov, outside 10 you hardly see any detail. With proper eye tracking and foveated rendering, giving the illision of a full 16K VR display won't be anymore taxing than rendering 4K currently. You do first need dual 16K panels small enough to fit in glasses and the bandwidth to display dual 16k at 120hz. (Since only a small part of the image has actual 16K detail, smart compression will be key) Anyway that way you can have 102 pixels per degree at 150 degree fov per eye. (human limit)
And sure, some will argue 32k glasses will be better and in theory you should still be able to tell the difference. 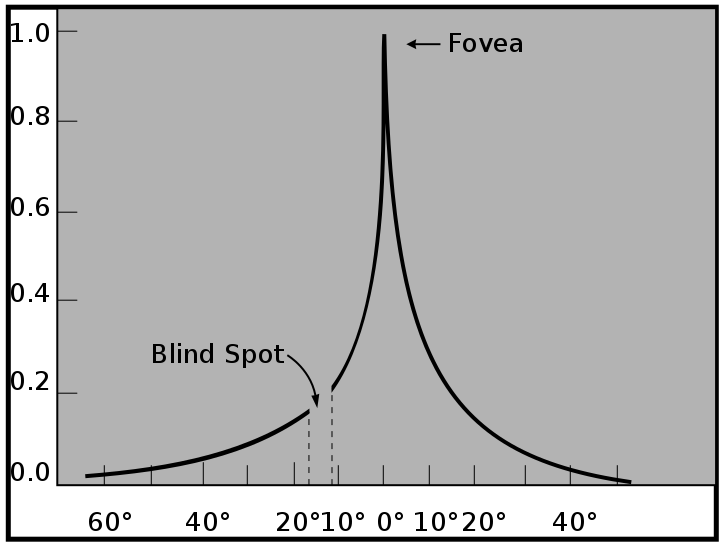 Outside 10 degree fov your eyes resolve less than 20% of resolution. So basically your 16k image can drop to a 2K render 15 degrees away from where you're focussing. Ofcourse current headsets are only 1K ish per eye horizontally. Still foveated rendering can already begin to help.

Not in screens. Cameras, yes, but you don't need a 128k screen. You can just zoom in (that way, the object you are looking at won't be so tiny that you can't see it).

Not on my watch.

They'll invest on high pixel count because the big number helps them sell new TVs to naïve people (the vast majority, alas) that would be perfectly fine with the 4k (or even 1080p) they already own, and that's a relatively modest investment for them, as display tech still has a lot of miniaturization available, unlike integrated circuits that are getting close to silicon physical limits. They'll also invest on HDR, but they'll always boast pixel count.
The sad news though is that such tech will have few contents on broadcast TV, mainly premium ones, as bandwidth is a limited resource, and TV netwoks will offer high res and HDR only on their main clear channels, while the other, like now, will keep on receive more limited banwidth, so people will watch on them interpolated 4k, furtherly interpolated to 8k by their TV set if they own a 8k one, and forget about HDR, they'll find some cheap way to replace it (BTW MPEG and other lossy formats already use very cheap colour encoding with fewer bits for red than for green, even fewer for blue, and they encode colour infos at a lower resolution than brightness).