Also part of the grand delusion Jesus Christ told it would be brought on mankind in consequence of their wickedness in the end of days.

The prometheus movie is a good sample of what this lies intend to: make mankind forget God as a creator and believe that we are our own gods, created by falible beings like us. 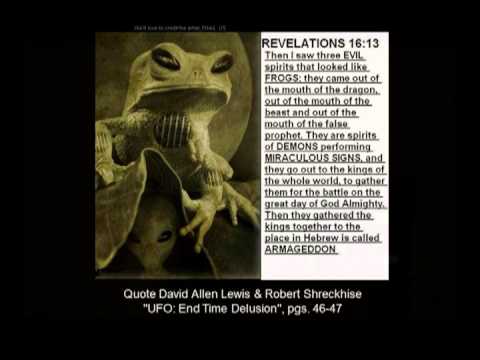 This lie is old as time, actually is the first lie ever told, by the father of lies himself:

¶ "You will not certainly die," the serpent said to the woman."For God knows that when you eat from it your eyes will be opened, and you will be like God, knowing good and evil."Gênesis 3:4-5

Funny how the "you can be as God" lie changes but never goes away, evil knows how effective it is...

Here is a decent documentary on the subject, start at 50 minutes or so if you do not have much patience

Don't let anyone deceive you in any way, for that day will not come until the rebellion occurs and the man of lawlessness [^1] is revealed, the man doomed to destruction.He will oppose and will exalt himself over everything that is called God or is worshiped, so that he sets himself up in God's temple, proclaiming himself to be God.¶ Don't you remember that when I was with you I used to tell you these things?And now you know what is holding him back, so that he may be revealed at the proper time.For the secret power of lawlessness is already at work; but the one who now holds it back will continue to do so till he is taken out of the way.And then the lawless one will be revealed, whom the Lord Jesus will overthrow with the breath of his mouth and destroy by the splendor of his coming.2 Tessalonicenses 2:3-8

The most strong evidence is that a christian can stop alien activity rebuking the so called aliens in the name of Jesus Christ, just like real christians rebuke demons.

And, for those that do not believe this stuff. Oh, it is very very real, just do some research, but stay in good side, the Lord and Jesus Christ, do not put your trust in demons and fallen angels.

I wonder how many of you believe in the so called supernatural, how many have had some proof of it in their very lives. I do have some, a bunch, of very interesting stories that hapenned to me, to change me from a atheistic UFO believer to a God fearing and lovin born again christian.

Through the ages demons presented themselves as many things, as follows:

- Fairies and sprites - first millenion after Christ and middle ages.

- Aliens - 1948 till today (This year was when the Book of Enoch was found in the Dead Sea, the very same year Israel was born and the Rooswell "crash" happened).

The theory that aliens originated the angels mith is just part of the current lie. Funny that channelers that used to recieve messages from ghosts and light spirits now receive from "extra-dimensional beings" and "aliens".

It is always a variation of the same lie, and the objective is always the same: to drive people alway from God and to say that He is a lie/told a lie.

The constant thing is: these "alien messages" always try to say God´s word is a lie or that Jesus Christ was not that important. Funny, but, they never attack any other religions, just cristianity... Some youtube videos show what I mean, but it is pretty evil, so, I do not recomend.

So, what do you guys think?

Wait, in response to the title, aren't fallen Angels the same thing as Demons? Whatever.

But, yeah, I never realized the stereotypical Alien looked like a Frog...

That is defintely one way to look at it.

For aliens to be demons they would have to first visit earth. Which we all know never happened.

According to the some bible passages and specially the Book of Enoch demons are all souls that are born from abomination, meaning, a union that God did not create, like an angel with a human female or animal hybrids. The apocrife book of Enoch states that, since God did not created these beings, their souls have no place to go after they die, so they torment mankind instead, pretend to be ghosts, aliens, fairies and whatever works to get them some human atention and a place to stay.

Santa Claus is also an angel. So is Bigfoot.

I agree. Tell everyone this.

Inly question though.....is god an alien? What is he actually?