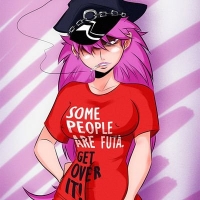 Another leaked.. it's real?

Killer7 was released in Japan for the GameCube! (2005) One of the "Capcom Five" meant to be GameCube exclusives, Killer7 was released by Capcom, but was developed by Grasshopper Manufacture. This game is probably best known for being one of Suda 51's first games to really leave an impact on the gaming consciousness, thanks to it being Suda's first game released outside of Japan.

Killer7 follows a plot that I can't quite follow, having never played the game. Something about assassins and competing governments in a post-nuclear setting. The internet as we know it doesn't exist, so it's probably dystopian. Oh, and something about battling immortals.

Anyway, the game was weird not only for its story, but also its gameplay. It was a sort of on-rails shooter/action-adventure. And in case you forgot, on rails shooters were even rarer in 2005 than they are today. The blood of enemies is used as currency to improve character attributes. This game is a bit strange.

Killer7 became an instant cult classic, by which I mean few people played the game and even fewer liked it, but those that liked it became diehard fans. It was sucessful enough for Grasshopper to take another chance in 2007 releasing No More Heroes for the Wii. Said game also had its detractors and less than stellar sales, but was popular enough to become a series.

That was a bit short, but there are two reasons for that. First, I didn't want to say to much about a game I haven't experienced. Second, tomorrow is Nintendo's E3 Direct. Which means nobody's got time to read anything I write until the 11th.

Seems like it. Valve is a natural partner for Nintendo, and handheld Halo rumors have been around for years. Pushmo World would be a bit surprising, given that it's an eShop game, but this could very well be the real deal.

I wonder why The Last Guardian isn't listed as a Wii U exclusive...

Would anyone buy a game called "Super Wii Nintendo U 64 3D" ??
What could it be anyway?
Also no X in the list = Fake.

So Halo for 3DS and Uncharted for WiiU was OK for you?

Of course, absolutely. I've been waiting for those MS and Sony franchises a long time... ^^

Seems legit. After all, there's not much differenc between X and ʎ.