No there are a lot of things we didn't see before and we still don't know how performance will be. By numbers, ps4 is better but the architectures are so different, all the helper-chips (SHAPE! Man, what a chip!), I can't figure out how this will translate for games.

Actually isn't it slightly higher than expected?  I thought it was expected to be mid-upper 1.2x range.  Not the 1.3x range.

That's what make his post innacurate... HotChips showed the Sony didn't lied (well the leaks are not from Sony insiders... the specs leaks come from a MS insiders).

Seems like its slightly faster than advertised. Looks like PS4 and XB0 will truly be neck and neck in most respects, with each having a few flavors and variants.

I am kind of surprised, though, they are using a 28nm architecture for the GPU. Given that AMDs 20nm revision is in October, I would have assumed it'd ship along a similar timeframe.. Guess not.

Guess this means my 7950s aren't gonna go out of style any time soon.

The chip covers an area of 363 square millimeters and is built in a 28-nanometer state-of-the-art manufacturing process. It has 5 billion basic components, known as transistors, on a single chip that combines a microprocessor, graphics processor, and 47 megabytes of memory.

As one member of the audience remarked, that mean it’s a big chip. Such chips are hard to manufacture, as any small defect can render a chip inoperable. And the larger a chip, the more prone it is to small defects.

To deal with that, Sell said Microsoft designed in redundancies into the chip where it could, so that if one section was inoperable, it doesn’t kill the whole chip. Nevertheless, it means that it won’t be easy to churn out millions of such chips.

To make the chip more power efficient, Microsoft designed small islands and gates within the chip that could switch off certain areas so the overall chip consumes less power. Such techniques are standard in big chip projects these days, and they mean that only the parts of a chip that are being used are drawing power.

The graphics section of the main processor has 15 special processors that can handle things like graphics or physics processing. Data highways can transfer bits at a rate of 200 gigabytes per second or more across different parts of the chip. The audio subsystem has two dedicated vector cores.

Microsoft disclosed some details, but left many important pieces out. Evidently, Microsoft doesn’t want to tell all of its competitors about how well designed its system is.

PS4: 1.84 Tflops with RAM that has more bandwidth.

Xbox One: 1.31TFlops with RAM that has less bandwidth.

That is not neck in neck. You could fit two X360s in that gap.

"The graphics section of the main processor has 15 special processors "

I thought the leaks showed 12 process unities. Or is he talking about the 15 co-processors?

The slides shows many processors... 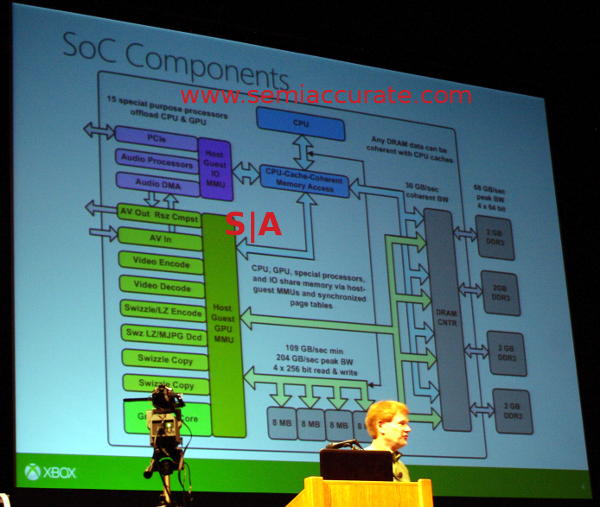 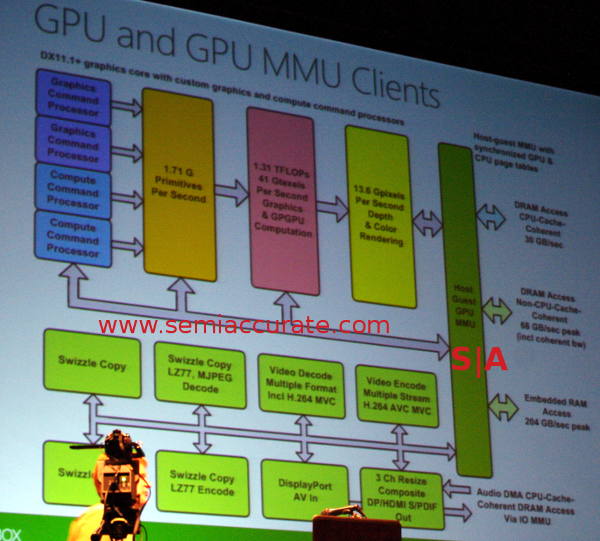 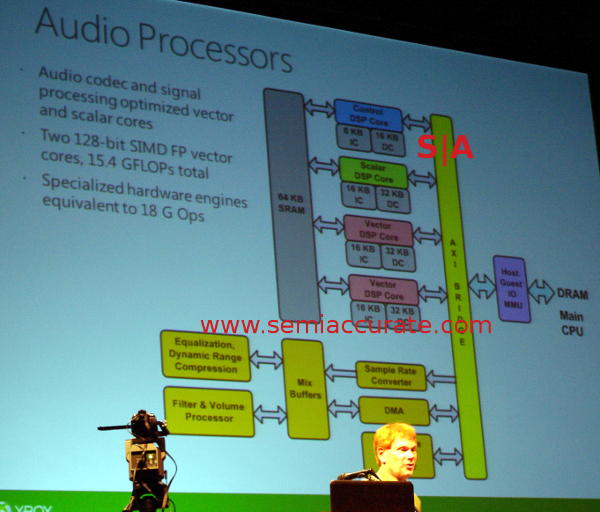 Just the Audio have four or five processors plus all the DMEs (Data Move).