Yea it is absolutely insane that $1500+ cards have shit Quality Control from Evga. This should have been something that was caught in testing. Clearly the GPU is failing at some point to even protect itself which is nuts. The users seem to be stating that something is making a popping sound before it completely dies so something most likely blowing up similar to their 10 series.

Yea I personally just do some stress tests to see where the temps are or if there's some weird issues.

Yea the Asus Strix according to BuildZoid has the best PCB of the bunch only second to something like a Kingpin or Hall of Fame as the Strix is fully custom and over-engineered. Evga's one if I remember correctly uses a Reference design PCB but with their own cooler and slight customization unless you go Kingpin. I always knew there was something off about those clown lips on the Evga cards and it looks like their Quality Control is the Joke.

It is truly shameful when a Zotac 3090 can have no issues like this but an Evga 3090 shits the bed.

GOG has a new sale and a new release:

Steam's Big Picture mode will be replaced by Steam Deck's UI
https://www.pcgamer.com/uk/steams-big-picture-mode-will-be-replaced-by-steam-decks-ui/
A Valve spokesperson has confirmed that Steam's Big Picture mode will be replaced by the Steam Deck's user interface. Big Picture mode is Steam's version of a console-like user interface: It can be navigated using a controller, and was pretty slick back when Steam Machines were still possibly going to change the console landscape (spoiler: they didn't). To say that Big Picture has grown long in the tooth is maybe an understatement, as it hasn't received a major refresh since 2015.

New details surface for IO Interactive’s James Bond game, will be third-person
https://www.dsogaming.com/news/new-details-surface-for-io-interactives-james-bond-game-will-be-third-person/
In November 2020, IO Interactive announced a new official James Bond game, codenamed Project 007. And today, a couple of new details about it have emerged via a job listing.
>> So, it will be Hitman but with a haired protagonist. Not a bad thing.

Konami’s PES series is now officially a free-to-play game, PC version won’t have next-gen graphics
https://www.dsogaming.com/news/konamis-pes-series-is-now-officially-a-free-to-play-game-pc-version-wont-have-next-gen-graphics/
Konami has officially announced that its Pro Evolution Soccer series will be now renamed to eFootball. eFootball promises to be an all-new football simulation platform, and will be free to play on all devices.

District 9 director Neill Blomkamp is making a game now
https://www.pcgamer.com/uk/district-9-director-neill-blomkamp-is-making-a-game-now/
Major Hollywood director Neill Blomkamp is venturing into the world of gaming, and he's working on a big multiplayer shooter.
Blomkamp—the brains behind Chappie, Elysium and the excellent District 9—has joined the recently formed Gunzilla Games as its chief visionary officer. He'll be working on a currently unannounced AAA multiplayer shooter, working with the studio to define the game's overall design, storytelling, audio and more. Blomkamp told IGN that his role is "an egalitarian version of being a film director," saying that he'll be "bringing directorial skills" from his films to "the aesthetic of the game."

Solve a posh murder as a young Hercule Poirot this September
https://www.pcgamer.com/uk/solve-a-posh-murder-as-a-young-hercule-poirot-this-september/
There are only two guarantees in life: fabulously wealthy snobs are gonna murder each other in ornate mansions, and detective Hercule Poirot is gonna gather them all in a parlor and explain at great length how he figured out who's guilty.
>> But... young Hercule Poirot was a Belgian police officer, not a PI.

After more than ten years it's still 'too soon' to say when Beyond Good and Evil 2 might be out
https://www.pcgamer.com/uk/after-more-than-ten-years-its-still-too-soon-to-say-when-beyond-good-and-evil-2-might-be-out/
It's been a long time since we last heard anything about Beyond Good and Evil 2, the follow-up to the critically-acclaimed action-adventure that will very soon be 20 years old. In fact, pretty much everything over the past few years has only emphasized its continued absence from existence, including its exclusion from all of Ubisoft's E3 presentations since 2019. Even BG&E creator Michel Ansel got tired of waiting for it: He left Ubisoft in September 2020, after more than 30 years at the company.
>> My guess is that it will launch between "when no one cares" and "never".

Hearthstone's next expansion has a Priest card that straight up kills opponents on the spot
https://www.pcgamer.com/uk/hearthstones-next-expansion-has-a-priest-card-that-straight-up-kills-opponents-on-the-spot/
Regular readers will be aware of my contempt for Hearthstone's Priest class. As far as I'm concerned, the degenerates who choose to main it, those players who actively seek out marathon matches in which they steal all their opponents' cards and generally make everyone's life more miserable, are the very same kids who pulled the legs off spiders at school. With that out of the way: check out this crazy new Priest card.

XDefiant will be exclusive to Ubisoft's store on PC at launch
https://www.pcgamer.com/uk/xdefiant-will-be-exclusive-to-ubisofts-pc-store-at-launch/
Ubisoft is reaching far and wide with its new 6v6 competitive shooter Tom Clancy's XDefiant. Not only is it coming to PC and every console at the price of free, but it's also aiming to have full crossplay support on day one. On PC, however, XDefiant's availability will be limited. The game isn't coming to Steam or the Epic Games Store at launch, and there's no guarantee it ever will.

Fallout 76 adding customizable private servers for Fallout 1st subscribers
https://www.pcgamer.com/uk/fallout-76-fallout-worlds-custom-private-servers/
When Bethesda released Fallout 76 back in 2018, players almost immediately began asking for private servers. And when they got those (premium) private servers in 2019, players had another request: make the servers customizable. This one's taken longer.

Steam Next Fest drops another payload of demos this October
https://www.pcgamer.com/uk/steam-next-fest-drops-another-payload-of-demos-this-october/
The first Steam Next Fest happened just last month and boasted more than 700 demos, but Valve isn't slowing down: another edition of the virtual event is kicking off on October 1 and running for a whole week. Once again, developer livestreams and "chats with teams about their games in progress" will take place amid the mad rush to sample upcoming games.

Skull and Bones is 'too big to fail', despite eight years of tortured development
https://www.pcgamer.com/uk/skull-and-bones-is-too-big-to-fail-despite-eight-years-of-tortured-development/
A multiplayer expansion to Assassin's Creed: Black Flag. An open-sea survival game. A session-based multiplayer deathmatch. Ubisoft Singapore's Skull and Bones has been many things over the past decade, with past and current developers describing the eight years of mismanagement stopping Skull and Bones from setting sail in a new report from Kotaku.

Play a free, broken twist on Tetris every Tuesday
https://www.pcgamer.com/uk/play-a-free-broken-twist-on-tetris-every-tuesday/
Everyone's played Tetris. It's solid, simple, satisfying. But if it's a little too boring for your tastes, one indie developer is uploading a new cursed remix of the venerable block dropper on Itch.io for free every Tuesday.
Every week, Tetrible (by developer Henri) updates with a brand new twist on Tetris. For example, this week's edition adds tiny Tetronimos to the mix, frequently forcing you to slot in half-sized blocks. Lines can be cleared at this level, which also ends up shearing your normal blocks in half, punching countless tiny holes into your plans.

Stardew Valley creator shares a game-changing tip hardly anyone noticed
https://www.pcgamer.com/uk/stardew-valley-creator-shares-a-game-changing-tip-hardly-anyone-noticed/
Stardew Valley creator Eric Barone has shared a handy tip to get through the early-game community centre slog.
(...)
Well, Barone has shared a nifty way to quickly know if an item in your bag is one that's needed for the community centre. In a tweet, he revealed that the community centre icon in your inventory will gently pulsate if you're hovering over an item that needs to be donated.

Gnarly concept art from The Thing's cancelled sequel game emerges online
https://www.pcgamer.com/uk/gnarly-concept-art-from-the-things-cancelled-videogame-sequel-emerge-online/
In 2002, now-defunct developer Computer Artworks ceased work on a sequel to John Carpenter's The Thing. 20 years later, concept artist Ron Ashtiani has given us a host of gruesome monster designs that have crept in the shadows for far too long.

I Had My Sexual Awakening Thanks To Final Fantasy X 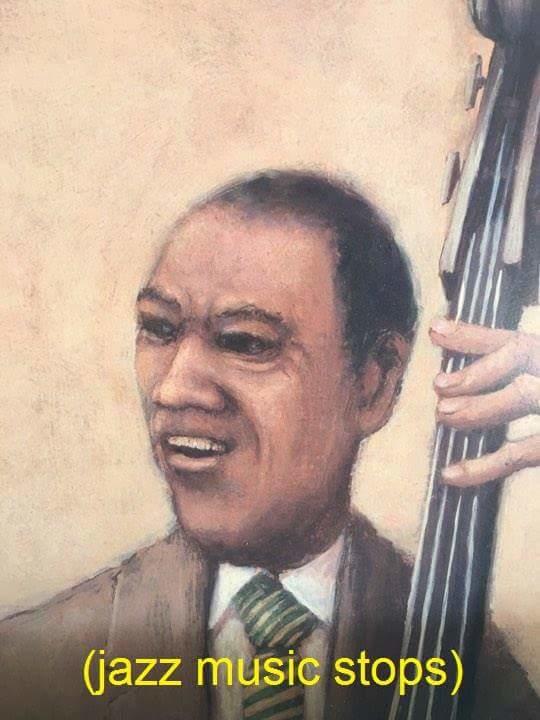 I saw that Kotaku headline earlier and nearly spat out my drink xD  Like even for them, wtf

Also not PC related but ordered a new fan for my room thanks to our ridiculously hot and humid heatwave(s). And... its not coming until next week when it kinda ends. Maybe It'll get some good use next month lol.

And yea, this heatwave man. Ours happened last month and I ordered an AC which came this month. Since then the weather chilled and I feel like returning it lmao.

I mean they're really asking for it with that headline. Some things are best kept to one selves.

Darn, its always the way lol. Just when you need something it doesn't come. You guys have have it really rough the last month like nearly 50c - which is insanity. And there's me and my family dyiing at the heat and its like 31c xD But yeah returning is an option if its just sitting there not doing anything.

I Had My Sexual Awakening Thanks To Ms. Pac-Man

It might be that the GPU itself is fine and that other components, like the VRAMs, could be the culprit here. Or the board diesn't have enough layers and is melting because it can't take the power that the GPU pulls through it. Final possibility in my mind so far, a big spike in Amperage. But in this case the PSU is total crap to even let that happen.