Dead Space 3 will offer microtransactions as part of its weapon crafting system, the game's producer has confirmed.

As originally spotted by Eurogamer, trying to create a weapon you don't have enough resources for causes the below screen to pop up, which offers you the ability to get some additional parts through "downloadable content". 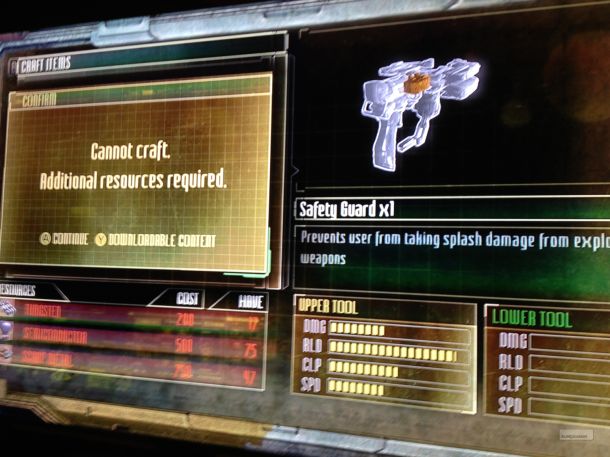 The resources needed to craft weapons can be found in a number of ways: you can pick them up yourself, send out scavenger bots to forage for them or, apparently, conveniently buy them from the in-game store.

The game's associate producer Yara Khoury told the site that "You can buy resources with real money, but scavenger bots can also give you the currency that you can use on the marketplace. So you don't have to spend [real world] dollars."

She also refuted the suggestion that you'd be able to buy all the game's best weapons right out of the blocks, making missions a breeze. "No you can't!" she explained. "There are a lot of weapon parts that are only available to buy later in the game. Unless you're playing through it again [on New Game Plus]."

Pricing for the extra resources hasn't been revealed, but Khoury explained that different sized packs will be available for varying costs.

While this is the first game in the series to feature microtransactions, EA has published other titles that use the system. The most prominent of these is last year's Mass Effect 3, which allowed you buy reinforcement packs when playing the game's multiplayer modes.

It's not as bad as it sounds since you don't have to participate in this but i guess this seems to be the future. I am guessing these are the kind of microtransactions are rumoured to be Destiny. Get a bigger in game gun with money if you want to.

at least it doesn't sound like the resources you buy will be random like they did with mass effect 3...

Thanks for the info. Canceling my pre-order and my Dev. Kit colllector's set. Fuck you EA!

EA can go to hell. Gaming would be better off without them.

OMG This shit better not catch on with other developers. GOD DAMMIT.

this model is completely fine. as long as a payment model doesnt stop you from doing things then its fine. like in mass effect 3 and fifa 13. EA are on to something. I will never buy DLC myself but the options there if you want. As long as they keep it an option who cares.

If people are willing to pay for it then go ahead, EA. Do what you can to keep making money so you don't have to close down like the many studios that have lately. As long as we don't HAVE to pay extra for in-game items then it's okay by me. Nothing to complain about here.

I don't understand anything. But seeing all the guys pissed off makes me wanna be pissed too

Fuck you EA. You suck.

This is the future. We must first fight it and than accept it. Seems less worse than online passes though. Can't even borrow a game to play some multiplayer.

EA seriously has the worst PR. I thought no one would top Activision this generation.

I don't see anything wrong with this. Some people prefer to play the game and get everything they need in game; other people don't have the time or patience to do it so they have the option of purchasing what they need.