Forums - General Discussion - Is this woman hot or have women believing skinny is hot gone too far in modern societies?

The 84 pound model claims she eats junk food all day.

Romanian model Ioana Spangenberg has a freakish figure: She has a natural 20-inch waist in contrast to her 32-inch hips. At 84 pounds and with her wide hips and tiny waist, the 30-year- old model has been dubbed by the UK’s The Sun newspaper as “the human hourglass.”

Spangenberg said she eats three square meals daily but cannot gain weight in her mid area. She said when she was 13 years old her waist was around 15 inches wide.

“Someone could put their hands around it, their fingers would touch and they would still have extra room,” she told The Sun.

“No one seems to believe it, but every day I eat three big meals and I snack on chocolate and crisps all the time,” Spangenberg added. “I just have a small stomach. It’s a bit like having a natural gastric band – if I eat too much, I feel sick.”

Spangenberg told the paper that when she was in her 20s she struggled with her self-esteem.

“In Romania it is better to be overweight, because that means you are from a wealthy family…so while my friends were going out and dating, I was sitting at home with Mars bars wishing I could fatten up,” she said. – From IBTimes.com

She may have a 20-inch waist but model Ioana Spangenberg could also have cellulite, digestive problems and risk the onset of early menopause, a Hollywood nutritionist tells RadarOnline.com exclusively.

Carolyn Scott-Hamilton has not treated the model, but has given her expert opinion on the Romanian’s claims she snacks on junk food daily.

As RadarOnline.com previously reported, despite 5ft 6 inch, 30-year-old Ioana only weighing 84 lbs, she insists she lives on a diet of chips, pizzas and kebabs.

“It’s definitely possible that she’s eating junk food every day but it depends how much,” Carolyn says. “It could be a small handful of chocolate and potato chips throughout the day.”

Even so, while Carolyn says the model could have a “super fast metabolism” eating a diet packed with junk food isn’t good, even if you’re skinny.

“If she’s eating all that salt and sugar she’s got to have cellulite,” the expert says. “She risks having problems with her reproductive system, her digestive track, as well as onset diabetes because she is eating so much sugar.”

Carolyn also says: “At 5ft 6 a healthy weight would be 130 lbs. But at 84 lbs that means she has very little to no muscle. It could mean she is so malnourished, starving even, that the muscles have atrophied causing the low weight.”

Although Carolyn says it is possible for someone to naturally have a fast metabolism she says it is less likely if you’re a 30-year-old woman.

“In order to be that thin, she would need to consume about 500 calories or less – about a quarter of a candy bar a day,” she says. “A high metabolism doesn’t work that well.”

Last week Ioana told The Sun, a UK newspaper: “No one seems to believe it, but every day I eat three big meals and I snack on chocolate and crisps all the time. I just have a small stomach.” – Radar Online

I do not know about the rest of you, but I find this form of obvious anorexia should be treated like a disease. She looks like a monster that would snap in half walking down some stairs. I could hardly believe any man would find this sexy. How about you?

I would break her

Your pinky would probably do it.

She looks like something out of a cheap horror film..

No she's not hot. Plus she's 30, which is over the hill in model years.

Anorexia is treated as a mental illness, at least around where I live.

But that figure is not all whatever disease/dissorder she has, she is wearing a corset which is nothing new 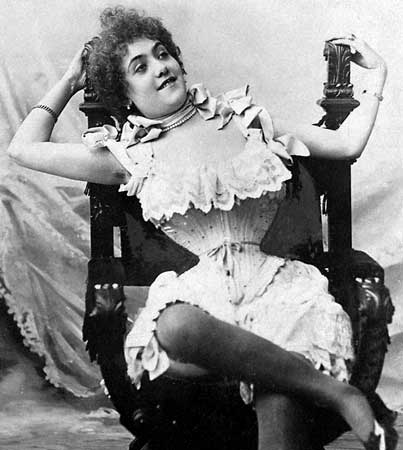 And no it's not sexy at all

Anorexia? She said she snacks and eats ALL the time, and wishes she was chubbier because in Romania chubbier chicks are looked highly upon.

Maybe you shouldn't degrade her for her obvious genetic disability. I'm glad she's able to live at least a somewhat normal life and have those that don't look down on her.

Do I think most people find that attractive? No. But her figure has nothing to do with pop culture and everything to do with her genetics. Girls who DIE from being anorexic aren't even that skinny in the waist.